“Hello, I’m here to visit The Sciosciapath.”  “We need to see your ID, and, if you’re carrying any sharp items, you have to leave them here.”  I empty my pockets and show the guard my ID.  The Mental Institution of Major League Managers is a relic from the 50’s, a product of discarded patients suffering moral treatment.  There’s Ron Washington chewing on a piece of chalk.  At least, I think it’s chalk.  Over there, Terry Collins is pretending a yo-yo is his arm.  Finally, I see The Sciosciapath, bifocals low on the bridge of his nose, carrying a clipboard.  He is a patient, but thinks he’s the megalomaniacal head physician.  He muahaha’s as he sees me, and screams at a discarded piece of meatloaf, “I told you to run, Darin Erstad!”  Any hoo!  C.J. Cron has finally emerged from the shadow of failed psychiatry in Anaheim and is putting up a season we thought always possible.  This is so unsurprising.  He was obviously a 27-homer hitter for the last few years as The Sciosciapath played everyone else.  If Cron is available in your league, grab him and stop screaming at your meatloaf.  Anyway, here’s some more players to Buy or Sell this week in fantasy baseball:

James McCann – He’s hitting over .300 in the last week with two homers.  That’s a whole lot better than what’s usually up, McCann.

Ryon Healy – As I think I said earlier this week, Healy’s similar to Mitch Haniger with less average and speed.  And that’s me paraphrasing me!

Matt Adams – Have you seen this guy lately?  He looks like he divorced his wife, lost 75 pounds and started dating 20-year-olds.  Yo, Matt, I appreciate you feel like a huge burden has been lifted, but I’m not sure you should quit your job to start a podcast about tattoos. 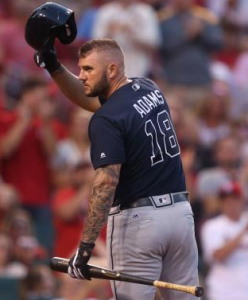 Jose Peraza – Yo, y’all wanna hurt me by not picking up Jose Peraza?  Why you wanna do that?  You hate handsome?  You hate the mustachioed?  You an anti-mustachite?  It’s time you embraced me.  Metaphorically!  Get off me!

Daniel Robertson – For a lot of these guys, I feel like nothing more needs to be said then pick them up.  I mean, if you don’t know Peraza or Matt Adams by now, you’re never gonna know them (is that a late-era Chicago song?).  Robertson, honestly, I don’t know that well myself, so let’s educate ourselves!  He walks a lot, like more than a senior in the mall at 8 AM.  His OBP is sexy AF.  Plate discipline isn’t usually something that just disappears either.  Unfortch, he has next to no speed, and his power is likely limited.  Think 18-ish homers on high side.  There’s some talk of him being a messenger of the Launch Angle Revolutionaries.  Remains to be seen, methinks.  17/4/.280 seems doable, which gets you excited depending on the league, I suppose.

Howie Kendrick – I went to look up How Ya Like Me lyrics for Howie and I caught a pic of Kool Moe Dee from back in the day, and he should literally dress exactly the same every day of his life.  Those sunglasses will never stop.

Enrique Hernandez – Never know whether to call him Enrique or Kiké.  Why can’t he just change that shizz to Enkiké?  Any hoo!  With Seager out for the season, playing time in the Dodgers’ lineup opened up.  With all the Dodgers injuries, they should call their lineup a “lie down.”

Alen Hanson – Mostly just a SAGNOF call, and Hitter-Tron only likes him if his name is Alen Wrench, and has his grips on his lugnuts.

Eduardo Escobar – I’m starting to get the feeling no one wants to pick up Twins hitters.  Joe Meh-er and Miguel Say-No are the new blech, but some Twins are all right.  Stop hatin’, haters.

Jung-ho Kang – Not sure why the Pirates are even thinking about playing Kang.  Though, could say same for Sean-Rod…or Frazier…It’s almost like they don’t know they have a minor league team.  Austin Meadows can’t get no love?

Willy Adames – Whether Adames is a Cylon or human is irrelevant, it’s whether or not he’ll be called up.  I see people adding Vlad the Mini Impaler, but in redrafts, Adames has a better shot of seeing playing time.

Leonys Martin – I gave you a Leonys Martin fantasy a few days ago, and his ownership needle has been in neutral.  You anti-mustachite!

Jorge Soler – He’s the model BSOHL’er, but is that Best Shape of His Life or Best Schmotato of Hot Lately?

Franchy Cordero – If you Google “Franch Military Victories,” Google suggests, “Did you mean The Franchy Cordero Revolution?”  And, ya know what, you did.  Google knows me better than I know myself!  And Facebook.

Mark Canha – Not really buying Canha as a breakout, but has schmotato’ed for a few now.  If you schmotato long enough, it does eventually turn into a star mitzvah.  It’s a shituation worth cyclops’ing.  By the way, we gained a new reader today that somehow made it to this blurb and was like, “What in the holy eff is this guy talking about?”

Joc Pederson – This Choose Your Own Adventure points back to Enkiké and how Joc is know scratching that ‘lie down’ itch.

Cam Bedrosian – I could’ve also listed Justin Anderson or Blake Parker, and, what do you know, I just did!

Nick Kingham – I already gave you a Nick Kingham fantasy.  It was written while being a helicopter parent for my dog.

Alex Reyes – We’re about a week or two away from me making Alex Reyes the lede of a Buy, so, depending on how competitive your league is, you might want to grab him now.

Jason Hammel – This is a Stream-o-Nator call like the call it makes to 23 and Me to ask, “How can I have no family?”  Yo, SON, is depressing.

Jake Junis – I actually have owned Junis for the last month in one league, however, this is a Stream-o-Nator call too.  Like the call it made to a refrigerator to see if it was his father.

Didi Gregorius – It almost seems like I dislike the Yankees.  Weird since I grew up a Yankees fan.  That, of course, has been bastardized due to fantasy.  I love Severino and Giancarlo, so I don’t hate the Yankees.  Our Buy/Sell Tool is screaming at the top of its lungs to SELL!!! Didi, and I agree.  Naturally — or natch, if you’re in a hurry — I’m not selling Gregorius at his preseason price.  He’s an easy top 50 bat now.  Our Fantasy Baseball Trade Analyzer might even be selling him short like Jose Altuve standing in a Macy’s window.  I wouldn’t sell Didi for a Vaping for Dummies book with its 1st chapter, “You can smoke and get cancer, or vape and have people wish you got cancer,” but I would explore options.