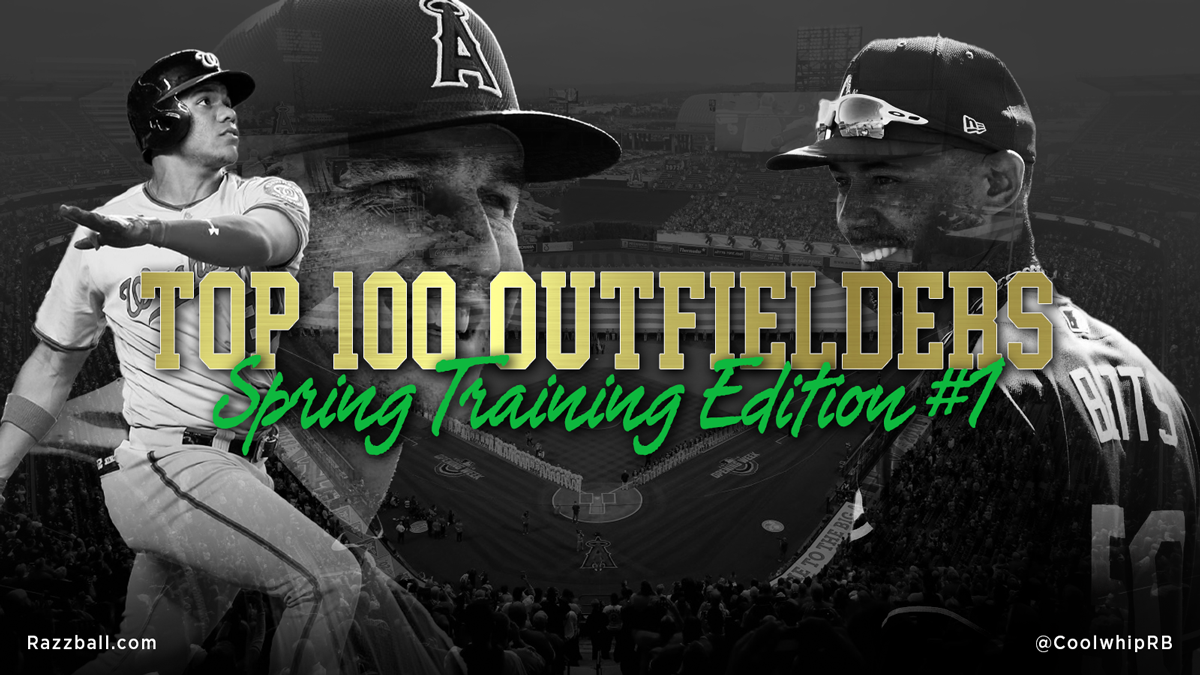 Isn’t it great to have baseball back? I can’t wait to go to a park, have a beer and brat and hear the crack of the bat again. This week we take our first look at what’s going down in Spring Training as a follow-up to the Top 100 Outfielders, where the palm trees and the cacti grow. Now that camps are getting into the swing of things it’s time for some minor housekeeping with the board. We venture back into the outfield while Josey’s on a vacation far away.

Jarred Kelenic – So I went ahead and moved him up a tier with how well he is hitting in ST. Yes, he was magically shelved with a knee injury that might delay his start to the season. Well, isn’t that a mighty fine coinkydink? I’m sure he’ll be ready for opening day, and I’m sure he’ll need some rehab games at the alternate site to get him back to playing shape in the big show.

Jackie Bradley Jr.  – You might have heard, JBJ signed with the Brew Crew. I have no idea why this has me intrigued so much, it’s not like he’s in a better lineup now, or better park; but I do like what he’s done in recent memory. Guess his pace. No, higher. In the last 162 game schedule, JBJ has gone for 80/24/70/10/.256. Fo realz yo! That’s pretty good, and more than good enough for your OF5 spot. The only issue is playing time due to a 4-way split. However, Lorenzo Cain has been dealing with a quad injury and those (like a hammy) tend to linger, so keep your eyes out for possible extended PT. Moved him up a tad.

Daulton Varsho – With Kole Calhoun’s injury and now a possible injury to Grey’s swoon Ketel Marte, Varsho looks to have an open barndoor for playing time in the outfield. Most places still have him marked as a catcher too which is likely where you’d draft and play him, but I’ll still bring him up here. Right now. He offers a nice mix of power late that will likely get everyday ABs, and that’s gold for a catcher. Movin’ on up.

Mitch Haniger – Haniger has been raking in training camp. It looks like the old Mitch is back and ready to ball out. Ummm, I guess he’s already balled out once; I mean, wrong choice of words. He’s ready to return to form. Hmm, still not there. Forget it! In 2018 he went for 90/26/93/8/.285, and in 2019 before the, ummm, incident he went for 15 HRs and 4 SBs in 63 games. The power is real and he chips in some bags as well. The best part is he’ll likely be slotted back into the 2-hole and accrue many ABs this year. Right now his price is that of a 4th or 5th OF, that’s nuts!

Taylor Trammell – So many Mariners on here! What’s wrong with me? There’s a rumor swirling that Trammell might break camp. He’s not listed below, but if he does, he might be. Interest: piqued. Trammell is a 70-grade speed player. And from his minor league numbers, looks like he could pace for 25 steals across a full season of work. And given the above’s injury history, it’s not the worst idea to hedge with T-squared or Haggerty if you have a deep bench. Either way, this tram might actually get some run and net you some cheap bags.

Trent Grisham -Trending in the wrong direction, Grisham pulled up slow this week with a hammy injury. This is not good for a player that gets a lot of value from his steals. That’s the entire reason you would take him as early as he’s been going. Let’s say that 22/25 pace now gets watered down to 22/19 or 22/16 with a .250 average etc., yikes. That pushes him down a few rounds or more. So he’s down until further notice.

Cavan Biggio -That’s right! We’re fading. So recent ST lineups show him moved down to the 7-spot in that crazy stacked lineup. Ruh-roh Raggy. Since his batted ball metrics are meh and he likely won’t hit for average, this does not bode well for his counting stats (a major carrier of his potential value due to OBP). At the top of the lineup instead is Springer (swoon) and Semien (swoon). There’s a chance he could still more this low in order with a lot of swing-and-miss behind him at 8 and 9. But I don’t want to bank on that with his current ADP price… Please move along sir.

Lorenzo Cain – Mentioned above, delayed due to quad injury. No thanks.

Kole Calhoun – Mentioned above, out for a while with a torn meniscus in his knee. Moved him nearly to the bottom.

Willie Calhoun – Rough time for Calhouns, huh? Recovering from a tight groin and unclear if he’ll be ready for Opening Day. Perhaps he should start wearing looser pants. (Leody SZN???) Hopefully, he finds some sweats and can be ready soon to recapture the hype from 2019 when he hit 21 HRs in 83 games to go with a .269 average.

Sam Hilliard and Garrett Hampson -The Dynamic Duo of Denver has been splitting time this spring in centerfield. NOT WHAT WE WANT TO SEE. Obviously, we’d prefer to see them each get 100% playing time at separate positions, but Bud and the gang seem to be giving Hampson a lot of reps in the outfield and mostly at the cost of Hilliard. Yikes! Something to monitor.