I was sitting at my computer and ready to write a beautiful ballad about Sixto Sanchez entitled “Sixto More the Richer,” when I came across a tweet from Ryan Bloomfield of BaseballHQ that changed my day forever. 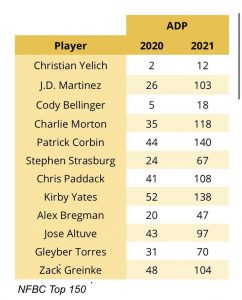 The Bloom Board y’all. Everybody’s favorite board since the Ouija Board. Similar to how Ouija Boards allow you to talk to the dead, I heard this Bloom Board audibly say “Torres, write an article on these ADP fallers.” Should I be creeped out? Am I experiencing psychosis? The answer to both is “possibly” but I think even a scared, psychotic person is capable of writing a decent fantasy baseball article. Let’s look into my crystal ball and see whether a few of these discounted players are going to return value on their ADP this season.

The 33-year-old Red Sox designated hitter was a huge disappointment for those who invested a top-30 pick in him last year. A .213 average with 7 home runs and 27 RBI left his fantasy owners more shaken up than that kid from the Sixth Sense when he was seeing dead people. While the surface stats were ghastly, the underlying metrics were also pretty disturbing for Martinez. JD’s hard-hit rate (41.6%), average exit velocity (89.5 mph), and maximum exit velocity (110.7) all represented career-worsts and have led to fantasy gamers wondering whether Martinez’s skills are on a steeper decline than Bruce Willis’ career. Hold your ponies, people. While he’s no spring chicken, JD is still only 33 years old and has shown no obvious signs that he’s physically breaking down. Was it mental? Was he experiencing psychosis? Maybe, but I’m willing to write off the craziness of last season and chalk it up to variance (just like I do when I lose at DFS). There are even a few signs that point to a rebound for JD. He certainly appears due for some positive regression in the BABIP department, as his .259 BABIP was significantly lower than the mid.-300’s BABIP that he has routinely had throughout his career. While the Statcast numbers I gave you earlier were a drop-off from previous years, Martinez’s barrel rate of 11% was pretty much in line with where he was in 2019 (11.8%).  It’s also been well-documented that JD felt the lack of in-game video negatively impacted his performance last season. It’s hard to determine how much that factored into his struggles, but the good news is that MLB has confirmed that they will allow in-game video to return this season. JD is probably more excited to watch his videos than the time 13-year-old me figured out how to circumvent parental restrictions so that I could watch my favorite videos again. Even with the magical return of in-game video, many fantasy drafters seem to be buying into the “JD’s in decline” narrative, as he’s plunged all the way down to an ADP of 103 this draft season. Also working against Martinez’s perceived value is the fact that he’s lost OF-eligibility and now heads into 2021 with the dreaded UTIL-only tag, which many fantasy analysts find scarier than this demon-looking guy hanging over Ted Cruz’s shoulder (it makes total sense). 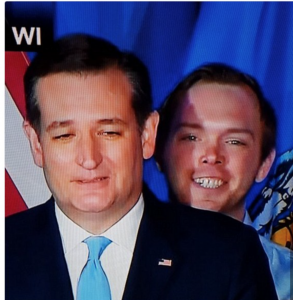 Personally, I’m not as terrified of the UTIL-only designation but it does give me some pause. While I do think JD bounces back this year, I also don’t feel like I NEED him on my teams this year. The best way to play it is t0 just wait a few rounds and draft Franmil Reyes for your UTIL slot, who’s in his prime, has fewer question marks, and has a similar projection to JD.

Now to my brother from another mother. Like Mr. Martinez, Gleyber let down fantasy drafters by putting up a measly 3 home runs, 16 RBI, and a .243 average in 160 plate appearances in 2020. He wasn’t right from the start, as he reportedly showed up to Summer Training out-of-shape and began the season colder than a witch’s tit. The cluster*** of a season only got worse for Torres in late August, as he ended up on the IL with a strained left hamstring that cost him nearly two weeks. Torres returned in September to put up a solid .842 OPS and proceeded to carry that momentum into the postseason, where he hit .435 with 2 home runs and stole a couples bases. It was certainly encouraging to see a strong finish for Gleyber and I think there’s a high probability that we see that version of him more consistently again in 2021. Would we have even noticed that brutal 160-plate appearance stretch in 2020 if had happened in the middle of a normal-length season? Probably not. To illustrate that point further, take a look at his 30-game rolling average graph since 2018. 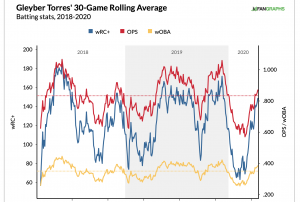 Though 2020 represented the lowest of lows, you can see that Torres has had similar ebbs and flows over the past few years. Given the small sample of a small sample from last year, I’m willing to almost completely throw out his 2020.  I say “almost” because I do think there are a few things that stand out for him when we look at his plate discipline metrics. Most glaring to me was Torres’ increased passivity in comparison to previous years. He had a 42% swing percentage, which was a significant decline from the 51.9% rate he had in 2019.  His more passive approach also impacted his O-Swing, as that decreased to a career-low 25.6%. Usually we would see that as a good thing, however, maybe Torres needs to be more aggressive in order for him to be the best version of himself. But let’s not overthink it y’all. Torres is a 24-year-old former top prospect who’s already given us an elite fantasy season and is still going to be hitting in a loaded Yankee lineup. You’re getting him nearly 40 picks later than his ADP from last year and I think that’s silly, as there’s no reason to believe that he’s a different player all of a sudden. As Justin Timberlake would say, “Buy buy buy.”

Okay, this one wasn’t on the Bloom Board but I just had a visual hallucination of Matt Boyd winning a Cy Young so that means I have to include a write-up on him. Coming off a disastrous 2020 season in which he posted a 6.71 ERA, Boyd has dropped from an ADP of 159 in 2020 to an ADP of 322 in 2021. Matty Boyd had become something of an industry darling heading into 2020, as the “Boyd Boys” believed in his velocity increase and solid strikeout rate from 2019. The main arguments against Boyd at that time were his lack of an effective third pitch, as well as his propensity to give up home runs. Well, the home runs were certainly an issue again in 2020, as he gave up a league-leading 2.24 home runs per game. The third pitch? We’ll get to that. In spite of that dumpster fire of a season, Boyd still pitched 60 innings in the shortened season, while also reportedly pitching through a strained hamstring and plantar fasciitis. Though 2020 was an unmitigated disaster, I do think there are better times ahead for the Tigers’ left-hander.  One of the positive takeaways for Boyd last season was the development of his change-up, which had only been used sparingly in 2019. He increased the usage on the change from 6.1% to 17.2%, and it generated a really solid 44.2% O-Swing and 25.7% Swinging Strike. Okay, but is that third pitch enough to turn Boyd into a fantasy asset? My answer is “yes” because I think there’s already a solid foundation to work with. Even with the abomination of 2020, Matt Boyd ranks 11th in MLB among qualified starters since 2019 with a 21.3% K%-BB%. That’s really good! Names directly above and below Boyd on this list are Jack Flaherty, Trevor Bauer, Lance Lynn, and Luis Castillo. Another category in which Boyd is near the league-leaders is in fly ball percentage, as Boyd ranks 2nd in MLB (behind Bauer) with a 43.9% fly ball percentage since 2019. This actually might be positive news for Boyd in light of the recent reports that MLB will be making efforts to “deaden” the ball in 2021. For Boyd’s sake, let’s hope that ball is deader than Mitch McConnell’s soul. By the way, if the ball really is deceased, would I be able to use a Ouija board or one of those psychic mediums to communicate with it during Boyd’s starts? Cy Young, here we come! Seriously though, maybe the dead ball helps bring down Boyd’s home run rate to a more palatable 1.5 per 9 innings. That in combination with his already solid K%-BB% leads me to think that we can see a significantly better version of Boyd this year. His mostly clean health history and his role as the Tigers’ “ace” makes me think it’s safe to project him for a full 175-185 inning workload, which is something that we can’t say about many pitchers heading into 2021. My upside projection for Boyd is an ERA in the low-4’s, with a 1.20 WHIP and over 200 K’s in 180 innings (which is basically what he did in 2019).

Here’s some quick hits on the rest of the Bloom Board inclusions:

Watch for reports on Bellinger’s shoulder that he dislocated while going all Bill Gramatica on us and celebrating a home run during the NLCS. Even if he’s 100% healthy, I’m still likely going elsewhere at that point in the draft. For a deeper dive on Bellinger, check out Son’s excellent “Trash or Treasure” article. Also, take a look at this piece by Josh St. Marie of SP Streamer in which he talks about a less-discussed risk with Bellinger.

Another player excited about the return of in-game video. Don’t count on a return to the 30-steal mark but I’m buying into a bounce back. Still only 29 years old.

Velocity came back up in the postseason but I’m not counting on him being able to sustain that for even close to a full season. I’m out.

Probably good value at his current ADP, but like with Yelich, temper the SB expectations. Also hope the “yips” don’t return because even at 5’6,”there’s no DH spot available to hide him, unless you just stand him behind Aaron Judge. 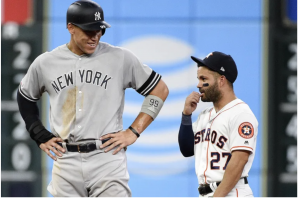 I’ve always been on team #NeverStrasburg and it’s going to stay that way. Will discuss more in next week’s article.

Paddack, like Boyd, was bitten by the long ball last year. However, even in what was considered a disastrous year, Paddack’s xFIP actually improved in 2020. That being said, he still only has two pitches and I don’t feel confident in projecting more than 140 innings for him this year given the Padres’ 6-man rotation and overall depth. I’ll take him if he falls a little farther but I won’t be actively targeting him.

Maybe as your SP4 but worried about that velo decrease.

That’s enough words for now. I’m cold, I’m tired, and my son is screaming, which means I’m going to pull a Ted Cruz and jet off to Cancun for a while. I should probably go see a Curandero (Mexican witch doctor) while I’m down there to figure out why I’m hearing these voices. While I take care of that, feel free to leave your thoughts in the comments section below. I hope you enjoyed, thank you for reading!