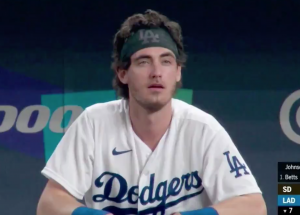 It was a cold and cloudy night. The glow from the computer screens, the only semblances of light. I looked to the heavens and asked, “How can I achieve fantasy glory?” The response was instantaneous. Select Adam Wainwright. Then thunder reverberated throughout the atmosphere as if the gods were mocking me. HA HA HA. After shaking my fist toward the sky, the clouds began to dissipate, unveiling a star that was brighter than bright. Oh, what a sight. Go forth towards the light and discover your fantasy white knight. I did what any moronic human being would do. I listened to the sky and trekked towards the light. After 40 minutes and 40 seconds, I came across a manger, situated right in the middle of the 405 Freeway, illuminated like a tornado touching ground on the Oklahoma Beltway. Cars were whizzing by, but that had no effect on the three wise men who were nonchalantly crossing the lines. Into the manger, they put gold, frankincense, and one Cody Bellinger. They waved me over. The countless hours of Frogger paid off as I was able to meet the three wise men unscathed. The trophy was glistening. I reached into the manger, picked up the trophy, then hoisted it above my head He-Man style, “By the power of Bellinger……”

Entering the 2020 season, Bellinger was being selected in NFBC drafts as the fourth overall player, behind Ronald Acuna Jr., Christian Yelich, and Mike Trout. And for good reason, as he clubbed 47 home runs and stole 15 bases with a .305/.406/.629 in 2019. It didn’t seem like a flash in the pan either because he had gone 39/20 and 25/14 in his first two seasons in the MLB. Just the natural arc of a budding superstar. Then 2020 happened. The .239/.333/.455 slash was by far the worst of his four-year career. He also injured his shoulder after going Captain Caveman….

This resulted in offseason surgery. Ok, I get that there are some concerns. Let’s dig in.

Now, for the differences. The hard-hit rate was only 38%, after being above 40% in the prior three years according to Fangraphs. He barrelled 9.4% of pitches compared to 13% last season. The exit velocity was a career-low 89.3 mph while the launch angle was 16.6 degrees. The BABIP was .245, the lowest by far of this career. That portends for some optimism because that should normalize. Over the prior three seasons, that number was .299, .313, and .302. The batting average against lefties was .216 last season. Which brings me to a quirk in Bellinger’s stats.

So far in Bellinger’s career, there have been certain stats that have alternated between good and bad. For example, the ISO has gone from .315 to .210 to .324 to .216. The batting average against lefties has gone from .271 to .226 to .280 to .216. If the SATs have taught me anything, it’s that 2021 is going to be a good year! I kid. The only thing I can think of is that it’s due to the constant pitcher/hitter battles of adjusting to the adjustments.

Much has been written about how we shouldn’t weigh the 2020 season too heavily due to the small sample size of 56 games.

During Bellinger’s impressive 2019 season, he struggled during the month of August. If I add some games in July to match last season’s game total, there are some similarities. Obviously, the power was much more prevalent in 2019, but the point is that 56 games are far too small of a sample size to show that 2020 is the New World Order for Bellinger. I will side with the numbers from the prior three full seasons.

As a scroll down the NFBC ADP list from drafts concluded in January to February, there’s Acuna, Tatis, and Betts up top. Ok, I’m good with that. Then Soto, Trout, Cole, Turner, DeGrom, Bieber. Alright. Ramirez, Story, Yelich, Freeman…..

Finally, there at 14th overall is Bellinger. Rudy has Bellinger as the fourth overall player. Most of the projection systems have him down for around 40 homers, 100 runs scored, 110 RBI, and 15 stolen bases with a .275/.370/.540 ish slash. Dayam. That be good.  Steamer has five players projected to hit 40 homers with only three with at least 10 stolen bases and an average above .275. TREASURE