I swear to you, they’re gonna drive me nuts.  All of them.  Mookie and Rusney and Victorino and Hanley and everyone in that dugout that gets a preseason talk from Schilling about all the good PR you can get from ketchup on a sock.  I’m gonna go stand on a street corner with a cardboard sign that reads, “Will work for clarity on the Red Sox outfield situation.”  Hey, H&R Block, can I write off clarity on my taxes?  The Red Sox said early this week that Mookie Betts and Rusney Castillo will split time in center to see who will win the job.  I originally placed Betts at a 10 to 1 long shot to win the job, pun intended and noted.  Then Castillo strained his oblique.  Oblique with no clarity is just perfect.  As I mentioned in our first podcast of the year, the Red Sox are gonna be a mess for fantasy value vs. playing time.  There’s so many scenarios that could happen — Hanley can’t play outfield, goes to short and Bogaerts goes to the bench; Rusney and Betts platoon; Betts looks great and Rusney gets benched; Rusney looks great and Betts goes to the minors; Rusney and Betts both look just okay and Nava plays well; Victorino gets hurt and Rusney and Betts both play; Allen Craig looks good and Betts and Rusney are benched.  Okay, the last one has no chance, but you get the idea.  Rusney’s health should be fine by Opening Day, but the oblique injury obviously puts him behind Mookie now.  I’ve lowered Rusney into my top 60 outfielders and changed his projections.  I’m sure this will change again by tomorrow.  Brucely, I think the only one guaranteed playing time in the outfield is Hanley (assuming he can handle it, and doesn’t Hanley it), unless there’s injuries, which there likely will be.  It’s a shituation of Old Testament, swarm of locust proportions.  Anyway, here’s what else I saw in spring training for fantasy baseball:

Chris Sale – Fractured his foot unloading something from the back of his truck.  Wasn’t confirmed what he was moving, but there’s rumors it was the chip on Frank Thomas’s shoulder.  He will likely miss a start or two of the regular season, but since it’s not an arm injury and I already only projected him for 189 IP, I didn’t adjust him in my top 20 starters.

Melvin Upton – First off, the name change.  Did this happen almost instantly across all sites?  Presumably, the people running these sites are men, so I can confidently say I’ve never seen so many men so happy to lose a B.J.  It’s almost like they’re all married and were sick of his old name mocking them for what they weren’t getting.  This is fascinating to me.  The ‘to me’ might be key there.  Any hoo!  Melvin (this is better?) is going to miss the first month of the season with sesamoiditis, which is a foot fungus that sprouts sesame seeds.  He’ll need a walking boot for 4-6 weeks and will have tahini by May.  Filling in for him might be Eury Perez, Eric Young and Zoilo Almonte, but my money’s on Young.  At least I hope since that’s where the most fantasy value will be.  Zoilo Mostel could Bialystock and Bloom into something if he could only hit the ball, but he makes Melvin (ha, seriously?!) seem like Rod Carew with his contact rate.  I moved Melvin (oh, c’mon!) in my top 100 outfielders and added Young.

Mike Minor – Scratched from his Sunday debut with a tight shoulder.  Now starting for your Atlanta Braves…Joey Turdsandwich!

Michael Saunders – Underwent successful knee surgery and the Jays are now saying he can return in mid-April.  I want to be happy by this, and maybe it’s because of this vision of a baby seal clubbing that won’t escape me, but I have my doubts.  A) Saunders had knee surgery, that’s going to affect his stealing.  B) Teams lie, I don’t buy he’ll be ready to go in mid-April.  C) There’s no C.  I moved him up a little to my top 80 outfielders and in my top 400, because even if he returns in May that’s still better than the All-Star break.  Now could someone explain to me why I have this vision of Heidi Klum and Seal’s baby at a nightclub?

Brett Cecil – Gibbons hasn’t named a closer yet.  Maybe the Blue Jays should go with a more decisive rhesus monkey.  *intern whispers in my ear*  I’m told that Gibbons is the Blue Jays manager and not a monkey.  My intern is a well-trained chimpanzee, so you can see the irony.  This feels like one of those situations where the Blue Jays don’t name a closer until the last weekend of the spring, and then just name Cecil, who was obviously the closer the entire spring.  It wouldn’t kill you to grab Aaron Sanchez super late just in case, unless after you click your mouse to pick up Sanchez it causes you to lose your balance and fall out your window.

Dayan Viciedo – Signed a minor league deal with the Blue Jays.  This is a good landing place for him.  Now he can fly directly from Toronto to Cuba.  Oh, as for fantasy, nowhere was going to truly help Viciedo.  He’ll get hot at some point during the season for a day, then I’ll talk about him, then you’ll pick him up, then he won’t be hot anymore.  Thens the breaks.

Coco Crisp – Will be moving to left field, and handling center will be Sam Fuld and Craig Gentry.  Twofold on the reason for this move.  The A’s are hoping to keep Crisp healthy and increase the chances of Fuld and Gentry not staying healthy.

Victor Martinez – Said that he could be ready for Opening Day.  Be even better if he hit 17 homers in his first spring game, but any good news helps the delusional people drafting him.

Addison Reed – 2 to 3 weeks from mound work.  To put this in allegorical terms, imagine your dog doesn’t poop for two to three weeks.  That’s Reed.

Alex Guerrero – Refuses to go to the minors.  Hey, I’m gonna try this.  I refuse to not win the two-hundred and thirty million dollar Powerball!  Anything?  Anything?  Hmm, my bank account isn’t changing.

Garrett Richards – Expected to miss 2 to 3 weeks of the season. I have him projected for 170 IP in the top 60 starters, so he’s about where I thought he would be.  I will say after this clunky sentence opening that the general vibe on Richards from drafters is that he will be Totes McGotes from Jump Street.  I don’t feel as comfortable with him and have him ranked below most, so I’m likely not drafting him.

Ryan Howard – Says he lost 15 to 20 pounds.  When Sandberg heard the news, he said, “I thought there was more room in the clubhouse, but I thought it was just that we got rid of Rollins’s ego.”

Juan Pierre – Retired last week from baseball.  In conjunction with his retirement, HBO announced a film about his career.  Here’s the poster: 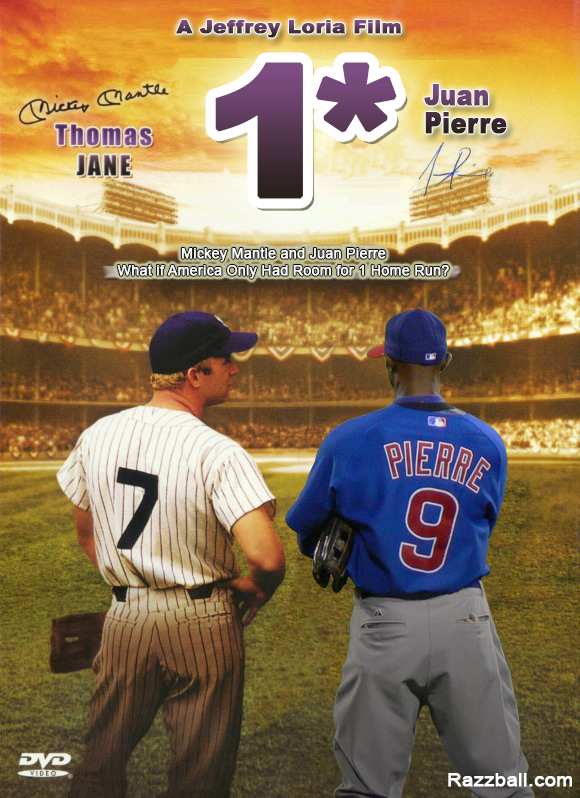