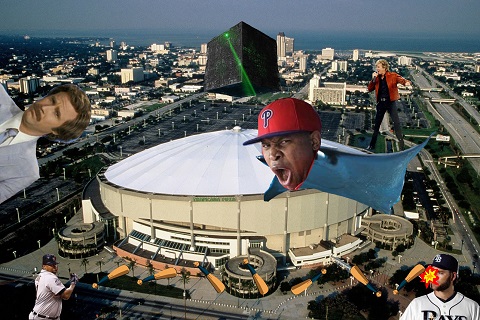 Hey now, somebody likes someone, or so says Marc Topkin, who, by-the-way, sounds like a X-Wing pilot. He has reported that there is mutual interest between Delmon Young and the Tampa Bay Rays. Ooo-la-la. They should get a room to rekindle the fire that once burned. Hopefully not in Tampa, because I’ve been there. It has bridges and old people. That’s… about… it. However, there are two things that I can say about this that are rock solid facts. First, Delmon Young is most certainly hanging out on your waiver wire. Maybe throwing bats at people. As pictured above, hopefully one of those people is Luke Scott. And second, he’s supposedly heading back to a team that utilizes match-ups correctly, and, most certainly, would utilize him correctly. Like if there’s a bat throwing contest. Now, forget everything you know about Young. I mean, don’t forget *that* much. He’s still kinda stinky, in, you know, a hobo sort-of-way. And if you’re wondering, there’s really no downside here, since hobo’s don’t own computers. I think. But if you’re actually wondering about why I’m talking about Delmon Young, it’s not because he’s hit .266/.300/.402 since 2011 and .261/.302/.397 so far this year. It’s because he’s hit .286/.361/.397 against lefties in 80 games. Which brings me back to the second point. Tampa Bay will play the match-ups here, and perhaps you should too. Who knows, he could get on fire, do some damage, and help your team for the stretch run. Or, you know, throw bats at people. Here’s what else I noticed yesterday…

Oswaldo Arcia — Sat out yesterday’s game with a sore wrist. But nothing to worry about here, as it looks like he’ll be ready to return later today, so Arcia then!

Brandon Belt — 4-for-6, 4 runs, 1 RBI. Not just perfect for your over-sized jeans anymore. He’ll help with your corner slot(s) as well. Coincidentally, that’s also what I call my love handles. Hunh?

Lance Berkman — He was supposed to be activated yesterday, but surprise! Berkman was, in fact, not. The Rangers aren’t ready yet, so they say. He’s hitting .364 with a home run in 11 rehab at-bats, but the more this draws out, the more he’ll become Breakman. Or Oldman. Or Sucksman. I don’t know, choose one.

Rafael Betancourt — After going back n’ forth the past week about who the closer is going to be when he gets activated, Walt Weiss has now indicated that the decision will be dependent on where Betancourt is ‘mentally’ at. What an amazing litmus. The sarcasm really only works for Rex Brothers‘ owners.

Chris Carter — 2-for-4, 1 run, 5 RBIs and his 23rd homer. Is it weird every time I say his name in my head, I say it with Chris Tucker’s voice? I mean, his Rush Hour name *was* Carter. Except this Carter isn’t Balackanese, he’s Strikoutanese. Juntao!

R.A. Dickey — 7 IP, 4 ER, 8 baserunners, 6 Ks. This is what happens when you have an unlucky and injury-ridden season. A bunch of frustration and mediocracy. I will admit that my stubborn zest for Dickey may have been misplaced. But I don’t care, I’m going to keep on being stubborn. Why? Because in a few short months, it’ll all come full circle anyhow, and he’ll be considered a sleeper pick.

Danny Farquhar — 1 IP, 0 ER, 0 baserunners, 2 Ks and his 6th save. Bounced back after his first blown save since being named the closer. Interim manager Robby Thompson wanted to see how he would respond. And his response? “Farquhar you!”

Chad Gaudin — 4 IP, 8 ER, 15 baserunners, 5 Ks. So yeah, five strikeouts in only four innings, that’s pretty good. Otherwise, he just illegally touched your pitching categories. And your bathing suit areas. Allegedly. Really, I don’t like Gaudin’s profile one bit. The Zone%, Swing% and velocity don’t match up, and yet he’s been able to cut his HR/FB in half. Gaudin’s in the right ballpark, but regression can come in both large and small doses. As does groping. Allegedly.

Jeremy Hellickson — 6 IP, 3 ER, 10 baserunners, 3 Ks. I get why we call him Hellboy. But at what point can we start calling him Mehboy? They call me Operator. As in… Smooth Operator.

Derek Holland — 7 IP, 0 ER, 5 baserunners, 6 Ks. He’s arrived. No joke, literally. And maybe figuratively. Unless you thought that was funny. Probably not.

Greg Holland — 2 IP, 0 ER, 2 baserunners, 2 Ks and his 33rd and 34th saves. Despite the early Herrera scare, which I think you can also get from drinking water south-of-the-border, he’s a top-5 closer. Oh, and he also has a higher K/9 and lower BB/9 than Craig Kimbrel. Isn’t that weird?

Desmond Jennings — Took batting practice yesterday for the first time since being placed on the DL. They say Jennings should be activated on Monday. Hey buddy, let me ask you take a look at something: .258 with a 11/17 and .257 with a 15/13. One is Desmond Jennings, the other is Will Venable. It doesn’t matter which one is which. What matters is that Jennings was drafted, on average, as the 110th pick.  Will Venable? 339. Just sayin’.

Jim Johnson — 1 IP, 1 ER, 1 baserunner, 1 K. Buck Showalter has been non-committal on the status of one Jim Johnson after three straight blown saves. Add-in the home run given up with last night’s non-save situation, the O’day might be coming for a change. Probably not. I just needed him to make the joke. Sorry Darren. If there’s a change, look to Tommy Hunter or Francisco Rodriguez.

Justin Masterson — 7.2 IP, 3 ER, 8 baserunners, 4 K. Took the loss while Sean Doolittle, who sounds like a character from Dick Tracy, netted the win. So I’ll allow this one-time infraction.

Matt Moore — Originally scheduled to come of the DL this weekend, he’s been pushed back after feeling some discomfort. The Rays are confident soreness won’t lead to any long delays. In the midnight hour, she cried Moore, Moore, Moore. Note: With a rebel yell.

Alexi Ogando — Diagnosed with inflammation in his right shoulder. The Rangers have sent his CT scans to Dr. James Andrews, which is a smart new strategy if I ever heard one. Seems this could be innovative way to avoid your players instantly going on the 60-day DL for two years via Doctor DOOM. You can have his reports Jim, but no touchy!

Hunter Pence — 3-for-6, 3 runs, 5 RBIs. One more RBI, and I could have made a joke with Sixpence None the Richer. The point is, Kiss Me. Hey now, no tongue. Not without a steak dinner.

Wilin Rosario — 2-for-4, 2 runs, 2 RBIs and his 17th homer. At this point, you gotta figure he’s a top-3 catcher going into next season. Am I going to draft him that high? I’m Wilin. You knew that was coming.

Justin Ruggiano — 3-for-4, 3 runs, 4 RBIs and his 13th and 14th homer. Well, after getting out of a 0-for-158 slump, he seems to be on fire. Which is wonderful, because that means melted cheese. This weekend’s Josh Reddick? Yeah, I could see it.

Ryne Sandberg — The Phillies have fired manager Charlie Manuel, paving the way for Ryne Sandberg. I would pick him up in all leagues. Wait, what?

Pablo Sandoval — 4-for-4, 1 run, 3 RBIs. I’m not sure what to think of his season so far. Then again, I wasn’t sure what I thought of hamates until he ate his. At least I think he did. He looks like a hungry man. And the word ham is in it.

Alfonso Soriano — 3-for-4, 2 runs, 4 RBIs and his 25th homer. So that’s 18 home runs in his last 40 games. He’s known to fit all of this production into a third of a season, which means the end of this run could be near. So be prepared to say Soriano.

Justin Smoak — 1-for-3, 1 run, 1 RBI and his 14th homer. The Smoak monster goes yard again. I won’t feel safe until he provides this kind of production for a bit longer. Remember, 1650 PA’s is quite a large sample size of FML.

Justin Verlander — 8 IP, 2 ER, 9 baserunners, 6 Ks. So far, in the second half, he’s pitched 40.2 innings with a 3.54 ERA and 35 K’s. Not vintage Verlander, but better. While the velocity loss concerns me a bit, I still think a functioning defense would mitigate a lot of his issues. Rick Porcello is nodding his head in a vigorous fashion at my statement. And I think Doug Fister just succumbed to whiplash.