After assessing starting pitching the last couple of weeks (ERA, WHIP), today I turn my attention towards the hitting side. There are so many unknowns right now about the length of the upcoming season; possibilities include everything from no games, to a full 162-game season stretching until Christmas. With at bats & counting stats completely up in the air, evaluating hitters with rate stats makes sense. What are the best ones to use?

Generally speaking, wOBA is a good all-around statistic to measure overall offensive contributions. Of particular note, this does not include stolen bases, and therefore is better used to evaluate sluggers than rabbits for fantasy purposes.

Of the new Statcast data, Barrels have been proven to have the best correlation to traditional power categories. Specifically, this post from the great Alex Chamberlain demonstrates that Barrels:

So: Barrels (on a rate basis: Barrels per batted ball event, or Brls/BBE%) are quick to stabilize, correlate with stats we care about, and can be carried over season-to-season better than most other stats.

With all that in mind, I wanted to look at players’ 2020 projections compared to their barrel rate from last year. Who was strong in barrels but has a poor projection? Who achieved a strong wOBA last year despite a below-average barrel rate? etc. Most projection systems aren’t fully including Statcast numbers, and so there’s room for profit when the two disagree. Without further ado, this week’s chart: 2019 Brls/BBE% compared to 2020 projected wOBA (ATC projections): 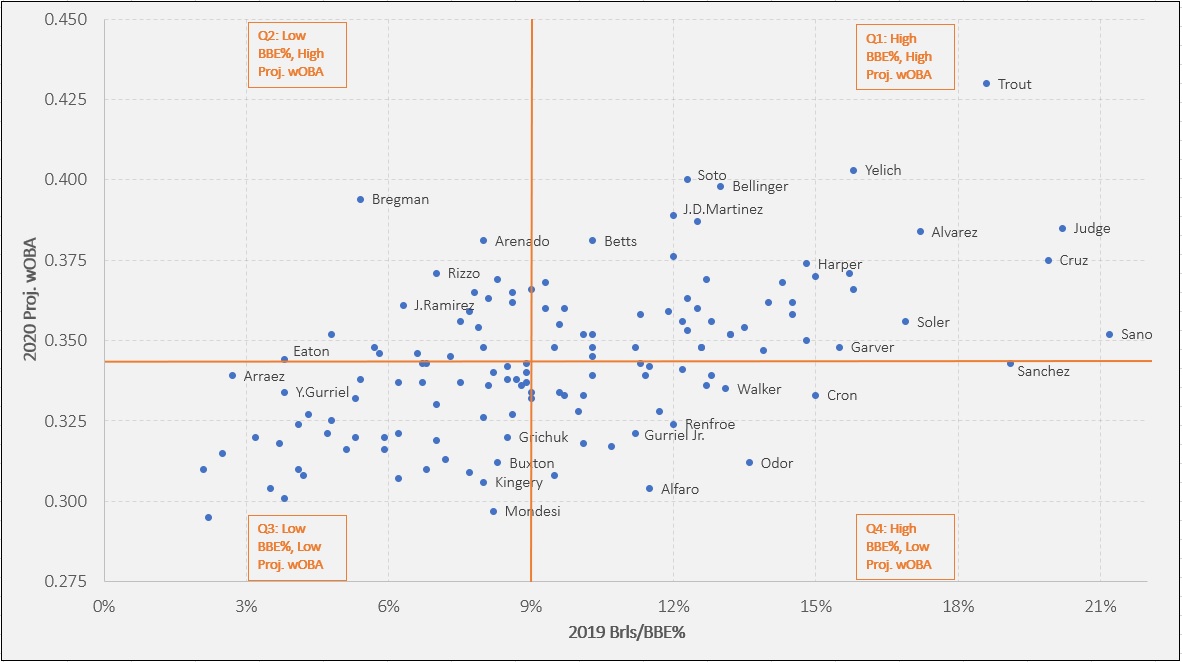 Click to enlarge. I’ve only labeled the players whose projections don’t line up with 2019 barrels performance, and only graphed the top-250 by ADP. Minimum BBE = 200. You can see the full data set here.

The chart has been divided into four quadrants, based on the averages in this sample; let’s look at each in turn.

Generally speaking, these are the top-of-the-draft-board players. Trout, Yelich, Bellinger, Harper, Yordan, Judge… no surprises. There are a few, though, worth discussing.

The least interesting players are those who 1) didn’t hit many barrels last year, and 2) aren’t projected for an above-average wOBA this year. In other words: trust the projections. A few interesting names here:

Here’s our pile of sleepers, guys who mashed the ball in 2019 but aren’t projected for high wOBAs this year.