Please see our player page for Victor Reyes to see projections for today, the next 7 days and rest of season as well as stats and gamelogs designed with the fantasy baseball player in mind.

Welcome back to MLB DFS, Money Monday edition.  It’s me, Cousin Timmy, here to start your summer with some cash to pay for a snow cone at the pool.  I’ve had some pretty good success building lineups the past few weeks so hopefully, that translates to giving you good information today. We have a 10-game […]

Guten tag, Razzkindred! While last week was not the most injury-rich week (HOORAY!?), there were certainly some big names on the list (sorry to all of you who have Max Scherzer). There were 12 entries to the COVID-IL along with a holding pattern of various leg and back muscle injuries. Is someone on your roster […]

Another week, another reminder of how quickly things can change in fantasy baseball’s deep league landscape. My desk is often littered with post-its featuring names of players I might write up a little blurb on, most of whom have fantasy ownership in the 0-5% range. What a difference a few days or a week can […]

We’ve done it! We’ve reached the end of the fantasy baseball hitter rankings for 2022 fantasy baseball rankings. Give yourself a big round of applause. I’d clap for you, but I have carpal tunnel from actually ranking all the hitters and writing all their blurbs and calculating all of their projections and– What exactly did you do? Oh, yeah, you read them. No wonder why your hands can still clap. Here’s Steamer’s 2022 Fantasy Baseball Projections for Hitters and 2022 Fantasy Baseball Projections for Pitchers. Subscriptions are up and running, and you can already get Rudy’s Draft War Room. Anyway, here’s the top 100 outfielders for 2022 fantasy baseball:

NOTE: All 2022 fantasy baseball projections are based on a 162-game season, and will be until we hear definitively there will be less games, due to the CBA. Also, I’m going on the assumption the NL is getting the DH.

NOTE II: All my rankings are currently available on Patreon for the price of a Starbucks coffee, if you get one of those extra grande frappuccino jobbers. Don’t wait for the rankings to come out over the next month, and get them all now.

NOTE III: Free agents are listed as just that and not yet projected. Once a guy signs, I will write out their blurb and add in projections, or remove them, if they sign in an unfavorable place. They are ranked currently where I think they might be if they sign on for a full-time job.

Not sure how many of you saw the other day, but Manny Machado and Fernando Tatis Jr. had it out in the dugout. Well, mostly Machado screaming at Tatis for him to be better. Tatis was arguing strike calls, and Machado was supposedly screaming at him to stop, otherwise Tatis might get booted from the game. Here’s a pic yesterday, after they supposedly made-up, but you don’t need a Rosetta Stone for Body Language to know this looks like a couple about to divvy up their belongings: 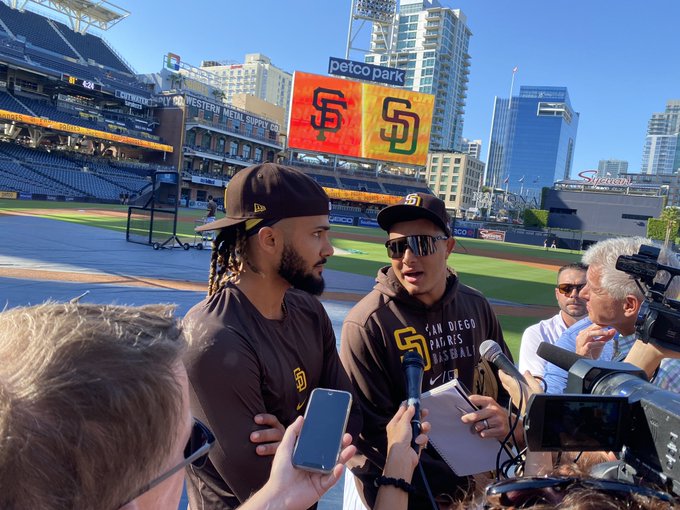 A true elder statesman Machado has become. He should run for “Parent” in the Parent-Teacher Association. Or “Teacher.” Whatever he wants to do, he can do now that he’s mastered “being a team player.” Machado, who has one of the worst home-to-first times, but not nearly a terrible 90-foot sprint speed. So what, you say. Well, that says to me, he can’t be bothered running to first, but when he wants to run hard, he has no problem doing it. Machado’s twelve steals tell me the same. He has the same home-to-first speed as Matt Carpenter, a guy who has only stolen 12 bags combined in the last four years. Yesterday, Manny Machado (3-for-5) led with his bat vs. mouth, homering twice (25, 26). For 2022, Machado seems capable of hitting 40 homers, .280 and stealing 15 bags or 15 homers, 3 steals and a .240 average while yelling at everyone to be better while he does worse. Anyway, here’s what else I saw yesterday in fantasy baseball:

The season grinds on, and if your teams look like most of mine, the injury situation keeps getting worse before it gets better.  Here’s to hoping you are still in the thick of things in at least one deep league; let’s do our RITD thing and look at some names that may be of interest to those of us in NL-only, AL-only, and other deep leagues.

At 41 years of age, thus begins Nelson Cruz‘s 2nd act where he becomes a lights-out reliever. You might be thinking, why would the Rays trade for Nelson Cruz? Well, MLB announced a Silver Fox Program where they will give money to seniors who need caretakers, so the Rays can get a $250/week stipend. “Eat your stewed carrots, Nelson.” “Not now, Brett Phillips! I’m up at-bat!” Wait until Nelson Cruz gets a load of Yandy Diaz’s 34-inch pythons and -4 Launch Angle. He’s gonna be like, “Yo, Yandy, have you considered upper cutting a tad?” Nelson Cruz about to make himself and Yandy better. So, Nelson Cruz was traded to the Rays for Joe Ryan and Drew Strotman. I’ll leave those to Prospect Itch to go over. Though, the Rays do seem to just wave their hand and say, “You will give us what we want,” like they’re Obi Wan. As for Cruz’s new fantasy value? C’mon. He’s 41, and can hit it out of Yellowstone. No new value. Cruz hasn’t had something new since he got an earring in 1987 when he was running with the Brat Pack. Anyway, here’s what else I saw yesterday in fantasy baseball:

Deep-league greetings, friends, and here’s hoping that you are holding your own in your leagues.  The injuries keep coming, and information about how long players may be out is vaguer than ever, making setting a weekly lineup full of players that you know will be healthy beyond difficult even in a standard league.  And as we all know, what’s difficult in a standard league is often next to impossible in a deep league.  All I’m saying is that if you’re finding the fantasy baseball waters particularly tough to navigate this year, you are not alone.  And with that thought, let’s look at a few names who may be of interest to those of us in NL-only, AL-only, and other particularly deep leagues.

Thanks for tuning in for my next weekly project: tracking all them ding dang injuries. I’m transitioning from transactions to trauma. From moves to maladies. From signings to sickness. From business to band-aids. From…that’s all I got.

Don’t we all love injuries? What would fantasy sports be without all those cute lil’ red “DTD”s and “IL”s and “O”s and “Q”s sprinkled all over our lineup pages?

I jest, of course. F*** injuries. Nothing sours your fantasy GM mojo like freakin’ injuries. Last year was banonkers (bananas + bonkers = banonkers) with COVID, and we’re already getting some of that fun as Spring Training kicks off. I keep seeing stuff about this wild California strain, and if there’s any proof in that pudding, then we could very well be in for a lot more COVID fun in 2021. I mean, we will be anyway, but this could compound it further. Joy.

Feels weird to say Spring Training is right around the corner when my neck of the woods has upwards of 20-something inches of snow on the way tomorrow night-ish. But, Spring Training is right around the corner! And it’s a good thing, too, cuz these weekly offseason updates are getting less exciting from here on out since all the sexy names have finally gone somewhere. There are some good players yet to be signed, but no one I’m on the edge of my seat over. Does anyone really expect Justin Turner not to be a Dodger at this point?

This past week was a bunch of meh faces in new places for the most part, except my boy Benny Baseball is closer to home now after a three-team trade I’ll be jumping into straight away:

We’ve done it! We’ve reached the end of the fantasy baseball hitter rankings for 2021 fantasy baseball rankings. Give yourself a big round of applause. I’d clap for you, but I have carpal tunnel from actually ranking all the hitters and writing all their blurbs and calculating all of their projections and– What exactly did you do? Oh, yeah, you read them. No wonder why your hands can still clap. Wait a second, I’m doing a utility-only hitter ranking this year. This isn’t the end of the hitter rankings. Feeling woozy, need to sit down. Okay, let’s get to it because this post is like 5,000 words long and I wrote it with my toes. C’mon, pinkie toe, push down the shift key! So, here’s Steamer’s 2021 Fantasy Baseball Projections for Hitters and 2021 Fantasy Baseball Projections for Pitchers. All projections included here are mine, and where I see tiers starting and stopping are included. Anyway, here’s the top 100 outfielders for 2021 fantasy baseball: 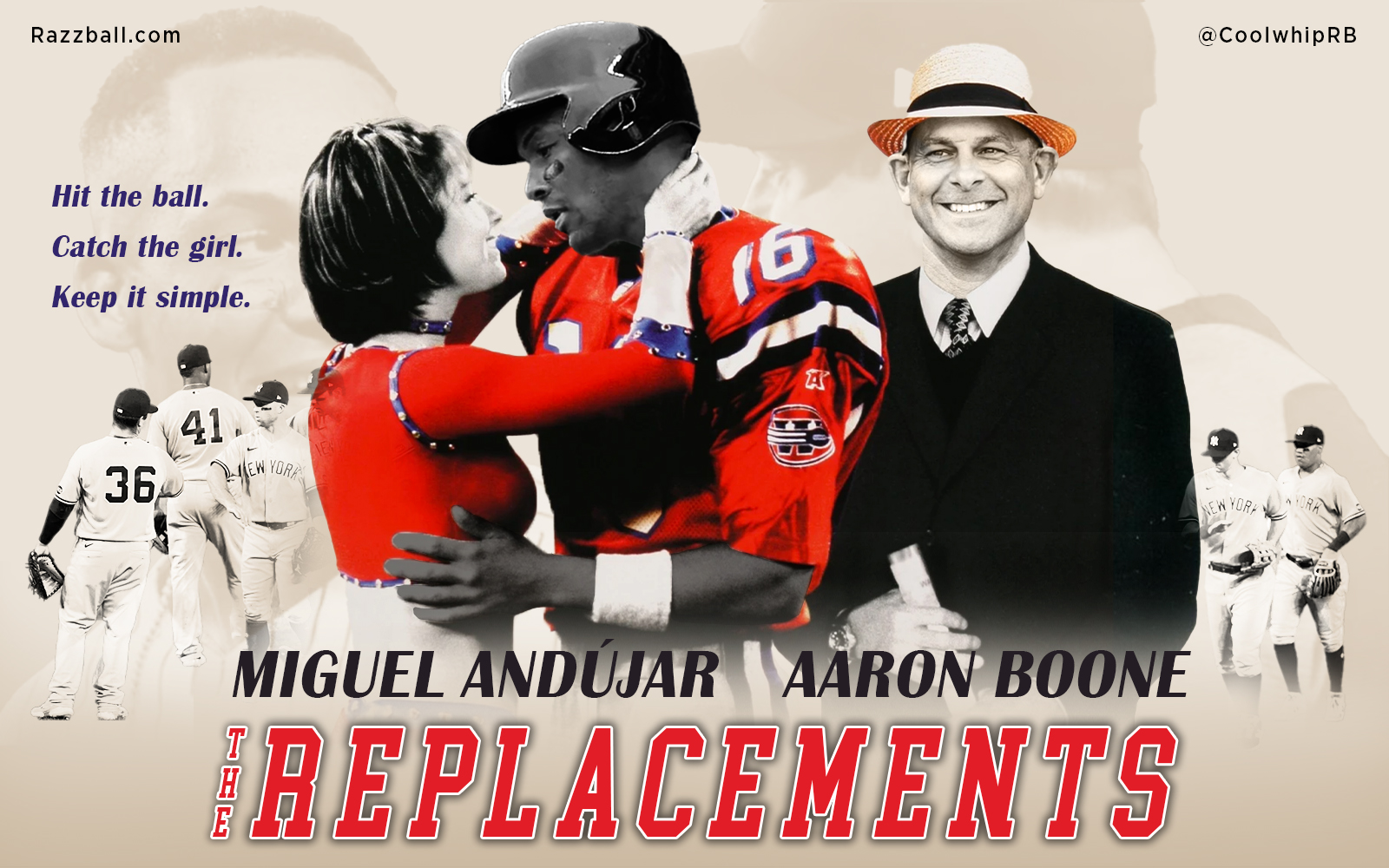