Please see our player page for Paul Fry to see projections for today, the next 7 days and rest of season as well as stats and gamelogs designed with the fantasy baseball player in mind.

What’s good in the Razzhood? Hope the first full week of fantasy baseball action treated you well. I had mixed results. I mean, I guess odds are if you’ve got multiple teams then you probably had mixed results yourself unless you drafted carbon copy squads. Just fyi, I’m writing this before games have finished Monday […]

A fine Tuesday to all of you Razzbeotches! With almost a week of real-life, these-games-count baseball behind us, I wanted to use my first regular-season S(aves)AGNOF report to give y’all some of my early notes on how things are (or aren’t) shaking out across the RP landscape thus far. Friendly reminder: I keep our Bullpen […]

What’s poppin’, Razzhooligans? Can you feel it? Regular season baseball will be here in 48 hours. Not long ago, I was certain we wouldn’t be playing probably at all this month. #grateful In my final preseason piece for you cool cats, I wanted to update my closer rankings since, well, a whole lot has happened […]

Here you will find bullpen charts for each team. Bullpens are a messy business to track, but the purpose here is to highlight each team’s closer(s) and setup men. You can more or less expect the chart to read left-to-right in order of importance, but again, it can be a fluid situation day-to-day, week-to-week (looking at you, Tampa Bay Rays!). So, not only are we highlighting saves options, we’ve got you saves+holds folks covered, too! 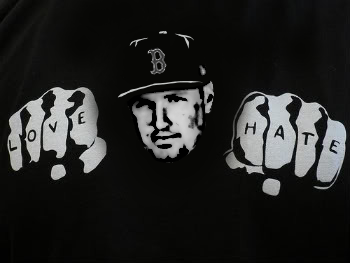 “Salvation is a last-minute business, boy.” — Hunter Renfroe (2-for-4, 3 RBIs and his 10th and 11th homer) looking at my fantasy team that is hurting for offense.

“Women are such durn fools.” — Enrique Hernandez (2-for-3 and his 8th homer, and 2nd homer in as many games). Hot schmotato alert!

“You know, when you’re little, you have more endurance than God is ever to grant you again. Children are man at his strongest. They abide.” — Bobby Dalbec (2-for-4, 2 runs and his 10th homer). He’s the type to get hot in a snap of the fingers, so if you need power, I could see grabbing him immediately.

“A good tree cannot bring forth evil fruit. Neither can a corrupt tree bring forth good fruit.” — Alex Cora as he fits the Red Sox for buzzers. Anyway, here’s what else I saw yesterday in fantasy baseball:

It’s week 10!  Yes my loyal readers, we have now reached the point of redundancy and rule changes.  I have no problems including the over 50% rostered, as well as I have no problem mentioning the same player week in and week out.  If you don’t want to pick up Lucas Sims, and you hate saves, I get it.  *side note, if you haven’t welcomed back @roto_wan for his SAGNOF series, give it a read.  Fellow bullpen guys need to stick together.  I digress….I can’t emphasize enough how much a couple category wins can mean for the entire season.  Category wins get tighter than Robbie Ray’s pants, and end of season standings get stickier than spider tack.  And with that, I hand down this article to you like previous generations before me.

Schoop, there it is! Jonathan Schoop continued his mashfest in Chicago Friday night as he reached base in each of his plate appearances going 4-for-4 with a double, a walk, two home runs (8, 9) and 5 runs batted in. Oh Jonathan, each time I think I’m out, you pull me back in. Tell me Jonny, what’s it like on the sun, because you’ve been more or less the hottest hitter in baseball hitting .565 over the past week with the monster five bombs and 10 RBI. He’s also got multi-hit games in six of his past 10. Grey told you to BUY and thinks he saw Schoop at CVS last week. Lol! CVS! He buys things at pharmacies just like us–how relatable! Probably picking up some Icy Hot to cool off that flaming hot bat. I asked Salt and Pepa of popular 90s rap group Salt-N-Pepa what they thought about adding Jonathan and they said, “I wanna Schoop, baby. Schoop, ba-doop!” and you wouldn’t know it but they’re actually huge fantasy heads. What more can I say, you all know by now what Jonathan Schoop’s ceiling is. He’s not Tatis all of a sudden but he is a hot little potato right now and is batting close to .400 over the past two weeks. The 9/15 K/BB is also nothing to sneeze at–unless you’re allergic to OBP. These kinds of numbers, ie barrages of home runs, will help your fantasy team. He’s still available in over 50% of leagues, but 50% of those are likely abandoned and managed by the super intelligent zombies in Army of the Dead. Yes the tiger, too. And even the undead know to add this guy while he’s hotter than a Billie Eilish slumber party. Yep, I’m definitely a Lost Cause. Regardless, time to scoop a Schoop!

(NOTE: THIS POST WAS RELEASED EARLY THIS WEEK ON OUR PATREON. IT’S $10/MONTH OR $13/MONTH WITH AN EXTRA WEEKLY PODCAST.)

Hearing nary a peep on Tony Gonsolin. I have my ear up to the computer screen for Tony Gonsolin questions, and, instead of Tony Gonsolin questions, all I hear is the 100 monkeys fighting over 99 typewriters in the other room, as they type up this reprot–Give Ling-Ling the typewriter! He’s Spellchecker Monkey! Sorry, it’s not easy being the monkey meditator. Maybe in the past two months people forgot the excitement over Tony Gonsolin, so due to some lazy-ass monkeys who I’m…*screams into other room*…about to fire, let’s just look at what I wrote in my Tony Gonsolin sleeper from this past preseason, “Tony Gonsolin has some kind of special numbers when it comes to contact rates. Ace-like. Just the Swinging Strike rate (14%) and the Swing rate (50.9) alone. To put that to you in real world terms, he’s around the strike zone, and hitters are ready to get on him, until the ball falls out of the zone and they miss.” In that post I compare him to Plesac and Maeda, which seems silly now, but you have to remember those guys are less good this year because they lost their command somewhere. If Gonsolin has his command, and in the rehab starts it looks he does, he could be at worst a fantasy number two to three for another 75 IP this year. Grab hmm! *screams into other room* Him! Him! Not hmm! That’s it, no bananas for anyone! Anyway, here’s some more players to Buy or Sell this week in fantasy baseball:

Did you know that Grey Albright is collector of art? He’s a man of sophisticated tastes and by art and sophisticated tastes I mean Alek Manoah and Chase De Jong shares on his fantasy baseball teams. What one person calls waiver wire adds, are another’s art collection. Other exciting items Mr. Albright has procured in recent weeks; an original Eric Hasse, a Seth Brown, a DJ Stewart, and even something called a Paul Fry! Move over Isabella Gardner, there’s a new collector in town. And by town I mean 3,000 miles west. Any the who… the Razzball podcast is back with loads of tidbits, advice, confirmation bias, and dad jokes.

(NOTE: THIS POST WAS RELEASED EARLY THIS WEEK ON OUR PATREON. IT’S $10/MONTH OR $13/MONTH WITH AN EXTRA WEEKLY PODCAST.)

I saw an article in the Denver Post the other day that said something like, “The Rockies should rebuild, and Bud Black is the man to do it.” And I became The Joker. I started tiptoeing down a staircase in bright makeup, twirling and cackling. Then I threw my computer out my window, hit a squirrel, who lawyered up and sued me, taking 51% control of Razzball. Which is why you can now find acorns in the Razzball store. Hope you understand why I have to say nice things about Jeff McNeil, too. Let’s be fair and honest and charitable, Bud Black was a good pitching coach. That the Rockies hired a pitching-first guy in Coors says all you need to know about how dumb that organization is, but rebuild? If Bud could lure Mark Reynolds out of retirement, he would play him over Ryan McMahon, because of his experience. Bud Black is the worst manager in baseball, and, as Quentin Tarantino says, that’s a very impressive feat. I bring this all up, not to crap on Bud, though that’s fun, but to warn you I only half trust him to play Brendan Rodgers. On our Prospectonator, we project every imaginable rookie, based on 162 games played. So, all things being equal, Alex Kirilloff is number one, Ke’Bryan Hayes is number two, but not that far down the list is Brendan Rodgers. He could be even the shallowest of leagues viable. Assuming the Rockies don’t lure back Mark Reynolds. Anyway, here’s some more players to Buy or Sell this week in fantasy baseball:

Here I go again sounding the trouble alarm. The way relief pitching is going this season I expect this will be a recurring segment every two weeks in SAGNOF. I’m taking a look at closers who have been struggling since the last time I wrote about closers two weeks ago. The concern level scale goes from:

Hey Deep Leaguers!  Somehow it’s the third week of May, and suddenly we’re already a quarter of the way through the baseball season.  What that really means, I suppose, is that we still have three-fourths of a season left to go, and a ton of baseball ahead of us in 2021.  Let’s get right to it, and take a quick look at some little-owned players who may be of interest to those of us in NL-only, AL-only, and other deep leagues.