Please see our player page for Deven Marrero to see projections for today, the next 7 days and rest of season as well as stats and gamelogs designed with the fantasy baseball player in mind.

Serious question, are the Pirates stupid or purposely being daft? Is this some kind of long game con that I’m not clued in on? They traded Adam Frazier, who might be their best trade chip, five days before the deadline, and they got back SS Tucupita Marcano, OF Jake Suwinski and RHP Michell Miliano. I might’ve made up some of those names and you have no idea. Maybe the Pirates couldn’t have done better, but don’t you at least try for another five days? Pirates hear one offer and are like, “Ya know what, that sounds good, whatever you want to give us.” So, Adam Frazier is helped by this trade, because now he’s presumably the leadoff man on top of a much better lineup. He doesn’t gain power or speed, but he’s a contact guy so more runs. The guy hurt the most here is Jurickson Profar, but his hitting hurt him 2nd most. Over in Pittsburgh, this gives Wilmer Difo a chance to move out of a Platoon, and into the Green Goblin costume! Anyway, here’s what else I saw this weekend in fantasy baseball: 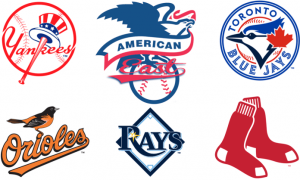 The AL East is “big boy” baseball. Four teams from the division ended 2017 in the top 10 for home runs in all of baseball. The Yankees were first with 241, the Orioles were fifth with 232, the Rays were sixth with 228….Hold up. The Rays? Yes, the Rays. The final team was the Blue Jays with 222. With great power, comes great responsibility. Unfortunatley, there was a lot of DGAF’ing, as the Rays were second in MLB for striking out and the Orioles were eighth. From a pitching perspective, it would makes sense then that three of the teams (BOS, NYY, and TOR) ended top 10 in strikeouts. TB ended 11th. Big boy baseball indeed. To cement the point home, four of the teams (BOS, BAL, TB, and NYY) were bottom 10 in sacrifice hits. TOR was 13th. Small ball, schmal ball. Chicks dig the long ball. Ladies and gentlemen, the AL East.

Sometimes you make a pitch because of the pitcher’s work.  Other times, you make it based on the work of the team he’s facing.  Lukewarm suggestion, Adalberto Mejia, come on down!  Really, I’m not gonna stump for many pitchers today as none of them have shown any form of consistency and the ones that I kinda sorta like are in difficult spots.  So with that, I’m sitting here staring at Mejia, seeing who flinches first…dah!  It was me!  Really, though, the Angels have been horrid over their last 7.  During that stretch they’re 28th in wRC+ and second to last in both SLG% and wOBA.  It’s a team that, surprise, surprise, is missing having Mike Trout in the middle of things.  Full disclosure: today is a GPP day to me and I wouldn’t really jump in to this slate with a cash mindset.  Why do I say that?  Well, take a look at the DFSBot and tell me how many of those pitching names you’d put your money behind today.  Go big and wild or go home, I say, and that’s what Mejia means to me as I don’t even like the guy!  DFS can make for strange bed partners…anyhoo, enough of that, let’s get on to this.  Here’s my Moonlight hot taeks for this blah blah land Monday slate…right after I remind you that this is still a thing.  Hit me up in the comments or on twitter and we can go from there:

Writer for #DFS #FantasyBaseball wanted for @razzball. Hit me up if interested, incentive based compensation available; ping me for details

New to FantasyDraft? Scared of feeling like a small fish in a big pond? Well be sure to read our content and subscribe to the DFSBot for your daily baseball plays. Just remember to sign up through us before jumping into the fray. It’s how we know you care!

The title is referring to 24.  I never saw 24.  Well, I’ve seen the number.  I never saw the show.  No interest really.  Not my sorta thing.  I do have a Kiefer Sutherland story though.  I think I recapped it in my book, Who Is Grey Albright?  Long story short, at my first job ever in Boston (and really only job ever where I collected a weekly paycheck), I was working in a film production office and someone called for the producer and I asked them who they were.  “Tell him, it’s Kiefer,” and I was like, “Kiefer?  Kiefer who?”  “It’s Kiefer Sutherland, you jackass!”  I wasn’t made for answering phones, apparently.  Y’all gotta admit; you hear the name Kiefer out of context and it’s a bizarre name.  Though, it wasn’t fully out of context, I suppose, since it was a film office.  Any hoo!  Whatever Trevor Bauer did prior to yesterday’s game, do it again!  Was it the pre-game chucking of a softball three-quarters of hectare?  Then do that!  Yesterday, he went 7 IP, 3 ER, 8 baserunners with 14 Ks.  Well, hello, there.  Can you stay a while?  Maybe I can make you a Cuba Libre and some Brazilian cheesy bread?  His peripherals are gorge too — 11.5 K/9, 3 BB/9 and a 3.03 xFIP.  Of course, his opponent, Sonny Gray went 4 2/3 IP, 7 ER, and thus illuminates the problem.  Gray was solid too, a game ago, and now look at him.  I’d grab Bauer for some Ks, but the risk is enormous.  He doesn’t just happen to have a 6.00 ERA even after yesterday’s game.  Anyway, here’s what else I saw yesterday in fantasy baseball:

Even after the trade of Manuel Margot to the Padres, the Red Sox still feature three prospects with big fantasy potential – Yoan Moncada, Rafael Devers, and 2015 draftee Andrew Benintendi. Cuban import Rusney Castillo was an adventure last year, and I’d imagine dynasty leaguers are faced with a choice between selling low or holding this offseason. Jackie Bradley is another question mark, but showed flashes and is still just 25 years old entering 2016. At the very least, his plus defense should give him a long leash. Blake Swihart graduated, and has a fantasy-friendly profile behind the plate thanks to his offense. Eduardo Rodriguez and Henry Owens made their debuts as well, and should be solid options in the middle of the rotation. In short, there’s still plenty of upside on the major league club and a top-heavy farm ready to feed it over the next two or three years.

“Hello, and welcome to the Izod Center in downtown East Rutherford, New Jersey!  We’re only 35 minutes from New York!  On tonight’s fight card, we have everyone vs. George Zimmerman and, our main event, Bryce Harper vs. Jonathan Papelbon!  Harper has him on height by a good six inches, if you count his mohawk.  They’re both tipping the scales like heavyweights, if you count their egos, but Papelbon has the reach by three and a quarter inches since Harper will be fighting off his heels, as he’s been known to do his whole career.  The Loafer vs. The Soft Shoe!  The Cock vs. The Guy With A Haircut That Makes Him Look Like A Cock!  The Veteran Who Plays The Game The Right Way vs. The Upstart Who Just Plays The Game Better Than Anyone Else.  Hosting this event is Donald Trump.  Making this country great again like he did in Atlantic City!”  Yesterday, I said, these two mix like vinegar and douche, and then the Nationals made sure they wouldn’t have to mix at all.  Papelbon was suspended for the rest of the regular season, which opens the door for Blake Treinen, Matt Thornton and/or Casey Janssen.  That’s the order I’d grab them for saves, but like a carrot in minestrone, it’s real dicey.  Anyway, here’s what else I saw yesterday in fantasy baseball:

All year we’ve been ranking the top prospects closest to the majors. With September call-ups quickly approaching, this post is a little different. Instead of limiting the list to players with their rookie eligibility intact, this will include any players currently in the minor leagues regardless of their at bats or innings pitched totals. There’s a catch, though. It’s only going to list players who are currently healthy and on their team’s 40-man roster. If you see a big name omitted, it’s probably because they aren’t currently on the 40-man. That can still be manipulated of course, but if a player is already on the roster, it increases the chances they’ll get a look next month. I also decided to weed through it for players that I thought could actually have some relevance in fantasy. With guys like Domingo Santana, Trea Turner, and even Aaron Altherr already up, this isn’t exactly the sexiest group. But there are some nice players in here, and if they can find playing time, they could also help your fantasy team down the stretch. When looking at who to pick up, I’d recommend focusing on teams that are out of the playoff hunt and who may be more inclined to give their younger players a look. Zeroing in on injuries (or potential ones) is also a good move. I bolded a few of the names that I think are interesting gambles…

The Arizona Fall League is over, but prospect season is in full swing. Razzball is posting fantasy-driven top ten prospect lists every Wednesday this offseason so be sure to check them out. While the AFL isn’t a long season, it features some of the better prospects in baseball and it’s worth looking back at a few of the top performers in the league this year. Moving forward, we’ll focus on the winter leagues. Big leaguers and prospects from many MLB organizations are still playing baseball! There are several leagues like this, but I tend to gravitate toward the Dominican Winter League the most. Players like Maikel Franco, Joc Pederson, and Rymer Liriano are just a few of the names you’ll find on the DWL rosters. Last year’s MVP, Gregory Polanco, created quite the buzz in 2014. The league runs until the end of December and I’ll check in on some of the performances there periodically in this Minor Accomplishments series. To follow along, you can live stream games here, here, and here. Just brush up on some Spanish first! Back to the AFL…here were this year’s top performers with some commentary: