Razz-a-ma-tazzers, there are two rules at Razzball that I made up*:

*Razzball leadership did not sanction or approve of these two rules.

In this edition of Ambulance Chasers, I will provide you with an MLB lockout update as well as a BONUS 2022 SP injury update and outlook. 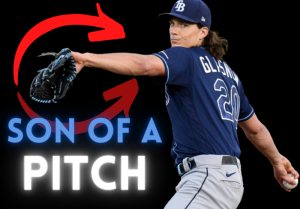 What is the latest with the MLB lockout?

There is no getting around this one: negotiations between the MLB (MLB leaders and owners) and the MLBPA (players) got ~*spicy*~ this week. The lockout started two months ago. The MLBPA put their demands on the table, and the MLB owners, who promised to offer a counterproposal, have responded with zilch.

In what, I, a classy lady, can only describe as a DICK SWINGING MOVE, the MLBPA said “Nah, what we offered you was reasonable. We do not need a federal mediator involved in this effort.”

File this edition of Ambulance Chasers under the “moral” and “financial” injury categories. I have seen fans call the lockout a battle of “billionaires vs. millionaires”, which is not accurate. Many of the primary objectives of the MLBPA’s CBA  benefit the most vulnerable and underpaid players. These objectives include ending service time manipulation and increasing minimum salaries.

Additionally, a billionaire making their billions off of a few talented millionaires is still a fundamental workers’ rights issue with labor at the center. I will not deny that it is easier for millionaires to sustain themselves and their colleagues or teammates without work for longer than the working masses. However, the power of collective bargaining is on full display via the MLBPA.

As a result of this week’s negotiation stoppage, it is unlikely spring training will start by February 26. As I mentioned in my first edition of Ambulance Chasers, the lack of preseason training and playing time opens the door for increased injuries within the season. #ThoughtsAndPrayers

What is the outlook for starting pitchers, pitching injuries, and beyond in 2022?

2021 was a brutal year for starting pitchers and relief pitchers. As I have mentioned in my previous posts, there are a combination factors attributed to the increased instance of injuries. Reasons cited for increased instances of injury in pitchers include downtime from COVID-19, more focus on velocity in pitching, regulations against sticky substances, and the generally increasing athletic abilities and size of pitchers. According to Sportrac, 185 SPs spent a total of  11,217 days on the IL. COVID-19 related issues were the most common reason for a a stint on the IL. The next three most common reasons SPs were on the IL were Tommy John Surgery (19 players, initial and revision), shoulder strain (13 players), and shoulder inflammation (13 players).

"I really, really want to stay in Tampa," Rays pitcher Tyler Glasnow said. "I think it’s a good place, obviously, for me to rehab. And l just want to work to get back to the team I want to play for." #Rays #RaysUp https://t.co/Zc0a6DKa9k

Players that remained out through the 2021 season include Mike Clevinger, Tyler Glasnow, Justin Verlander, and Spencer Turnbull. Players like Chris Sale, Luis Severino, and Noah Syndergaard spent a large portion of the 2021 season on the IL due to Tommy John Surgery. However, these players were activated towards the end of the season. As a result, Grey feels bullish enough to include them in his  Top 60 Starters for 2022 Fantasy Baseball. Kenta Maeda is still recovering from his Tommy John surgery, with a potential return in September 2022.

Players that were most frequently on the IL (outside of Tommy John Surgery and COVID-19 related illness or protocol) were Yu Darvish, Sonny Gray, Dinelson Lamet, and Kwang Hyun Kim.

In conclusion, picking up SPs that are fresh off the IL is tempting. Use caution and pad these pitchers with steadily healthy pitchers.

Are there any SPs that are freshly off the IL that you want to draft this year?

Drop your response in the comments or hit me up on Twitter: @keelin_12ft.

Oh my. The first line is a lie re: no proposal by the MLB. Many creditable sources report otherwise. Political biased reporting is not acceptable. Than came name calling and insuations of poor, poor workers… FACT IS: the UNION refused unbiased Federal mediation.
.

You seemed to have conveniently missed a few key points while reading this. I’ve compiled these points here for you:

1) There is not a “first line” that says anything about “no proposal by the MLB”. There is a mention of there not being a counterproposal (different than proposal).

2) I think you meant “credible” (not “creditable”). I agree that proper sources are important which is why I included them in this piece.

3) There is no “name calling” in this article. Perhaps you were referring to the MLPA’s “big dick swinging move” (meant as a compliment) offended your sensibilities.

4) I understand not all folks are aware of the gov’t’s well-documented preference towards big business. The MLB was essentially gifted exemption from antitrust laws by the govt and hold a ridiculous amount of power. It is not a normal organization even in terms of big business.

5) The simple fact of the matter is that, for now, businesses need labor to make money. Professional baseball players provide a type of specialized labor. The players have leverage to improve the quality of life for players now and in the future. It would be foolish not to go for it, especially as injuries and inflation are on the rise. Do you negotiate your own work packages (salary, benefits, etc.)? Do you think you deserve to be compensated for the value you bring your place of work?

I am interested to continue this conversation with you.

you are parsing my non pro9fessional writing rather than addressing the issue.

You stated that MLB has responded zilch. Factually untrue.

Your union pro bias is evident. No matter how framed, saying no to a Federal mediator from a left wing, pro Union Administration is NOT moving forward. I was VERY DISAPPOINTED. There is ONLY POSITIVES asking a 3rd party to help

As a business owner and an attorney, I can tell you so many ways that’s wrong. Mediation only works when both sides want to resolve their issues and relies upon the willingness of the parties to move from their positions. For a few years now we’ve seen owners not moving, just demanding for the most part (these negotiations and shortened covid season negotiations). Asking a government mediatior in won’t fix things. It’s posturing by the owners.

You said IT!! Mediation only works when BOTH sides want resolution. The Union does NOT. Unions have DESTROYED many once strong USA Industries. Textile. Steel. Auto. On and on. If MLBPA was for the players, the MiLB would be partnered.

So, I’m right that you’re wrong? You seem to be speaking a lot more from personal opinion or emotion than you are from fact. Very few things in life are one sided and it’s not accurate to make such wide sweeping broad statements like unions have destroyed everything. You may not like unions but history shows many good things from them as it wasn’t that long ago that some of those industries you list literally worked people to death.

there are no easy answers on the current CBA negotiations and it’s not one side good or bad. There’s so many things and so much history involved that it doesn’t work to just label one side as bad.