And we’ve reached our final top 20 recap for the infield, and, if you exclude the top 20 catchers, 3rd base is by far the shallowest position. 3rd base ain’t great, y’all! This is the first position where there’s guys at the tail end that I actively wouldn’t have wanted on my fantasy teams, and guys like Yoan Moncada, Bobby Dalbec, Ke’Bryan Hayes, Adalberto Mondesi and Anthony Rendon all stunk, and didn’t even come within a sniff of the top 20 3rd basemen. Also, even the top 20 2nd basemen, which wasn’t great saw Wilmer Flores at 20, he’s 19th overall here, so this was a tad shallower. To recap my recap before the recap, this final ranking is from our Fantasy Baseball Player Rater with my comments. This is not for next year. Anyway, here’s the top 20 3rd basemen for 2022 fantasy baseball and how they compare to where I originally ranked them:

1. Jose Ramirez – Prolly the most locked up position player you’re gonna find. Call him Mr. Locked Up from Lockerbie, shopping at Foot Locker with a grant from Lockheed Martin to make specialized drones to take out other 3rd basemen challenging for the top spot. As much as I want to fete Jo-Jo-Ram, and, boy, do I love to fete, even if it sounds like the gayest word ever, not that there’s anything wrong with that, but Jo-Jo’s 2nd half wasn’t great and he’s getting up there in age, and, yeah, will save that for next year when I get out on one of the most consistent guys in the sport way too early. Preseason Rank #1, 2022 Projections: 106/34/108/.273/25 in 567 ABs, Final Numbers: 91/29/126/.280/20 in 601 ABs

3. Austin Riley – Struggled in the preseason with how much to trust Riley’s previous season, and for four (stutterer!) months he made me seem silly for ever doubting him, then he trailed off in August and September just to give me some more pause next year. Thank you, Riley, for giving me just a little agita! Also, I mentioned this a bunch in the shortstops recap, but it truly is crazy to me how many at-bats some of these guys had, and how few runs they scored. Not talking about bad teams or guys low in the order, either. Preseason Rank #5, 2022 Projections: 87/33/98/.262 in 588 ABs, Final Numbers: 90/38/93/.273/2 in 615 ABs

4. Nolan Arenado – Kinda weird one, because I was totally out in the preseason, and he did better than I expected but my preseason projections vs. his end-of-the-year numbers are that different? Rhetorical! Though, absolutely screwed up by calling him a preseason schmohawk, and that’s kinda where it stops for me, because my dog ate the rest of my notes on him, and I put my dog by an open window, and, do you need to know more? No! I still have the dog! He pooped out the notes, and I was drying the turd-notes by the open window–NOOOO!!! Torenado! Preseason Rank #8, 2022 Projections: 76/32/89/.252/1 in 580 ABs, Final Numbers: 73/30/103/.293/5 in 557 ABs

6. Rafael Devers – Do the Red Sox have a San Fran Giants thing going? Are they on an “every other year” thing? Devers seems like he is, though 2020 kinda messes up everything when it comes to multi-year narratives. Saberhagenmetricians are going to studying this all offseason, or at least every Monday, Wednesday, Friday. Jokes aside (were they jokes?), Devers’s season looks like a clearcut case of a guy who was nursing an injury in the 2nd half. His numbers look solid, but the ball just wasn’t being driven. Preseason Rank #2, 2022 Projections: 104/36/115/.284/4 in 597 ABs, Final Numbers: 84/27/88/.295/3 in 555 ABs

9. Eugenio Suarez – Already went over him in the top 20 shortstops for 2022 fantasy baseball.

10. Matt Chapman – Yo, my preseason projections were really good this year, methinks, while metalks like a leprechaun. If being honest (for once!), I’d prolly say I had visions of Chapman hitting more homers than I even projected him for: Delusions of Grandstands Souvenirs is the medical term. It’s promising that he cut his strikeout rate, and, from his O-Swing%, it looks sustainable. Preseason Rank #11, 2022 Projections: 72/31/86/.214/2 in 523 ABs, Final Numbers: 83/27/76/.229/2 in 538 ABs

17. Yandy Diaz – Ya know what my Bohm and Yandy Diaz preseason rankings tell me? I do well projecting guys, but I clearly have blindspots when it comes to ranking. I know what Yandy and Bohm are going to do, but I rank them much lower, because I don’t want those stats. I’d prefer to take a flyer off waivers on a breakout or hot schmotato than have Yandy (or Bohm) all year. You could Frankenstein a 3rd baseman together off waivers and beat Yandy or Bohm. Or at least have fun trying. Preseason Rank #42, 2022 Projections: 51/10/56/.267/1 in 445 ABs, Final Numbers: 71/9/57/.296/3 in 473 ABs

LOL i caught that too……they really need to lose A-Rod from that broadcast crew though he is terrible.

Watchin Nestor do his thing vs Cle today. My best pick at #328 still looks great. At 3B took Arenado at #63 and he panned, but price is goin up.
Like Miranda if I get sniped on the upper echelon 3B this season, or Berti if I need the bags.
Looks like HOU-NYY for AL pennant, Stros should advance I think, but you gotta perform. Just ask the Dodgers, ugh…love ya brother

Nestor looked so good, super impressed by him…Miranda is interesting…and I guess Gunnar if he has the eligibility — love ya!

Keeper league with obp. I have Tyler Stephenson as a keeper.

Our LM switched the league this year so that keepers are associated with the rounds they were drafted in previously. Can keep 2:

Pts league that slightly favors pitchers (can start 7 per week) and obp.

Trout in the 1st.
Bichette in the 2nd
Cease in the 5th
McLanahan in the 10th
Rutschman in the 14th 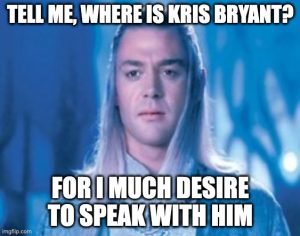 I saw it reported, though i can’t say i ever saw him in uniform

Hmm…Taking your word for it here!

Surface level takeaway is 1 of Machado/Riley/Witt is going to be my 3B on every team next year. Not going to mess with it. Kinda like i did this year but now I’m more of a believer

Yeah, tried Jeimer in a few leagues, and that worked out great, in reverse

Oh man, woof, i had him a couple places too as a CI. Candelario was little more than a wax statue 90% of the season

Think I had Jeimer/Hosmer as a corner platoon in one league…HA!

Manny Machado: has speed when he wants to, but usually he doesn’t want to.

3b really is a blackhole outside of catcher… if you don’t have the top ones just gotta stream I guess.

This year I started with Mondesi and Torkelson (yikes), then it was Urias (zoinks), then traded for Bryant (and he got hurt within 2 weeks, same for B Lowe in May, luck of the smurf and made my skin turn from blue to purple from smurf rage), then it was Bohm and there were many hamandeggers streamed…

Bohm’s final numbers very meh, but he did have a good stretch where he had a buncha multihit gms in a row.

It’s such a mess, there’s a few new names that should make it better next year…But yea, not great…Bohm was super meh…When compared to Torkelson or MOndesi, though, he was great!

Bohm really did that little with that many at bats? I swear he didn’t play that much.

This list has me going all in on Mondesi once again.

Thing about all those Bohm ABs is it means he doesn’t walk at all..Mondesi for the 48th time!

a. Wow, so underwhelming. Anyone who didn’t have the top 4 were looking elsewhere. No one expected such goodness from Eugenio especially with him going to a pitcher’s park and with Winker’s swoon. Done in this year by Ke’Bryan, Mondesi and his positional eligibility.

A. Ha, yeah, not great and, as you mention, there’s a ton of guys who didn’t make this list that were even worse!

Shouldnt Gunnar Henderson be on this list?….I know short sample size, but better then some of these guys on the bottom stats wise.

Well, at the lower end I just included players that were drafted in the final week of RCL drafts. On the Player Rater he is only shown to have SS eligibility anyway, where he ranked 1167.

From 24 down there is so many names riddled in there that suck so bad…Haha…Joey Wendle! I forgot about him…Woof! Mondesi was still the worst, incredible…Thanks for this, Vin!

Yeah, I was going to say Bryant was just as bad from the same round, but I guess he did give 160 good ABs to Mondesi’s 50 bad ABs.

Haha, yup! Mondesi was one of the worst of all time…Coupel that with you could’ve drafted Judge instead at the same cost…

Ah, okay, so not quite as much pain as I was hoping for…Arenado instead of Mondesi might’ve been a good move *sticks head in oven*

*turns oven on only to have the breaker go out*