Thomas Pham is a 27-year old rookie who has made the most of his first month in the big leagues. Big Magoo wrote about him on Tuesday, saying “Enjoy the fling while it lasts, but be wary of a long-term commitment.” And I completely agree! I don’t think that Pham will be a viable option in shallow mixed leagues next year. 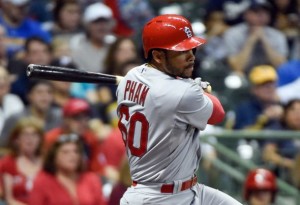 Can he do it? Yes, he pham! Remember those great Jorge Cantu chants? Jorge can’t hit a home run! Yes, he Cantu!

My initial reaction was: could this be a Charlie Blackmon scenario? Blackmon’s first full season came at the age of 27, when he batted .288/.335/.440 with 19 bombs. But, Blackmon had already had plenty of major league action to that point, and his skillset was generally superior to Pham’s. So, I slapped myself and recognized that Pham is a perfect playoff schmotato and nothing more. Given that information, Pham has absolutely crushed over the past two weeks, posting a 1.350 OPS with 4 homers and 12 RBI. At this point in the year, you need to grab onto these hot streaks. And, Pham’s hot streak is molten right now.

The Marlins outfield is only big enough to handle one prospect as Logan Morrison is hitting the DL on the same night that Mike Stanton finally hits a home run.  Morrison projected to be the anti-Stanton with solid AVG and OBP but limited power (10-15 HRs).  Yet after 4 early HRs, he was showing the […]

These are the leading hitters in the major leagues for April.  Do I think every hitter does the same thing every year?  No, I don’t.  But hitters do tend to follow patterns.  If these players were good in April last year, there’s at least a chance they will be good this year.  Also, as I […]

What I never understood about the trading deadline is why wait until the last second to make a trade?  Did the Padres really wake up on July 31st and think they suddenly needed a bat?  Wasn’t this apparent on April 2nd?  I understand you don’t trade for pieces if you’re out of it, but the […]

Chris Davis is so easy to strike out that pitchers should let him get a 4th or 5th strike like you’d give the small-for-his-age kid in little league.  “Good cut, Chris!”  Then the parent who needs anger management screams, “It’s on a freakin’ tee!  Hit the damn ball!”  Davis is also so easy to strike […]

I’m bitter.  I dropped Brennan Boesch in one league on Wednesday night for Russell Branyan.  Branyan DNP yesterday.  Boesch hit a homer off CC.  All my ex-classmates at the College of Fantasy Baseball at Charleston are going get on my case.  That’s Waiver Wire 101, man!  I’m chagrined. The problem is someone like Branyan will […]

This is a moderate Buy.  I wanted to find a player that would make you excited to buy, but I also wanted to cover Grady Sizemore.  I owed it to you, loyal Razzball reader.  So here we are.  Grady has NOT (Hey, it’s Caps Night!) been terribly unlucky.  I know BABIP makes you say WTF, […]

Trevor Hoffman has been lights out all year.  Maybe he jumped in the Cocoon pool.  Octavio Dotel?  The post office said they’re going to a five day week because of cutbacks and the amount of fan mail coming in for Dotel.  Now hold the preceding up to a mirror.  Dotel as a Pirate has done […]

Finally, Jacoby Ellsbury hits the DL.  This is probably a DL trip of less than a week.  At least the Sawx hope so.  Was also revealed Mike Cameron will miss a few weeks with a strained abdomen. (Shouldn’t it be a strained abdoman?)  If Cameron needs surgery, he could miss up to two months.  Darnell […]

Brian Fuentes hurt himself lifting weights.  Can’t he just take HGH like every other freakin’ major leaguer.  Hayzeus Cristo, my closer luck has been terrible so far this year.  The closerousel has made me really nauseous.  Forget SAGNOF, more like CRYNOF, which acronyms to nothing but has “cry” in it.  Fernando Rodney is the immediate […]