Holy shiitake mushroom Batman… is it safe to come out yet? Bobby Parnell, Jarrod Parker, Kris Medlen, Brandon Beachy, Patrick Corbin, Bruce Rondon, Jameson Taillon, Matt Moore, and now Ivan Nova have all fallen slain to some guy named Tommy John. Arrest this guy someone! Isn’t this world tragic enough without some mad man weaponizing UCL’s? Personally, I think this is all a plot by Dr. James Andrews to do what Peyton Manning did in Denver, and that’s put himself into position to control the food supply and then ultimately force us to eat all of our cats. Hunh? In fact, Dr. Andrews recently explained why there is such an uptick in UCL surgeries, but I’m pretty sure this is what was going on in his head as he was talking. Regardless, my expert advice is to just go ahead and hide all of your pitchers on the bench and stock up on canned goods. Spam is my choice. Deal.

– Watch out folks in the top-10, our very own mustache-man, Grey, is sitting at #23 (in his RCL #1, more on that league below). When asked for a comment, Grey said: “BOOYOU!, cause I can’t spell booya.” I think that statement can stand on it’s own merits.

– Last week, Tehol cried me a river about not mentioning that he was in the top-10 last week. Little did he know, that was my sweet revenge for spoiling last week’s Game of Thrones episode before I had a chance to watch it. What? I go to sleep early on Sunday’s. Why? Probably the drinking. Anyways, I was going to mention him this week, but oops, looks like someone is missing in action. Solved my problem, so awesome job falling out of the top-10 Tehol. The Elder Gods have spoken.

– Also, three leagues in the top-10 that have ‘Au Shizz’ in the title. I’m leaning conspiracy…

– So, something crazy happened last week. And no, it didn’t involve Sky’s mother or her bathing suit areas. Though, if you did guess that, you’re pretty close. No, in fact, words cannot describe what went down, so here it is in picture form: 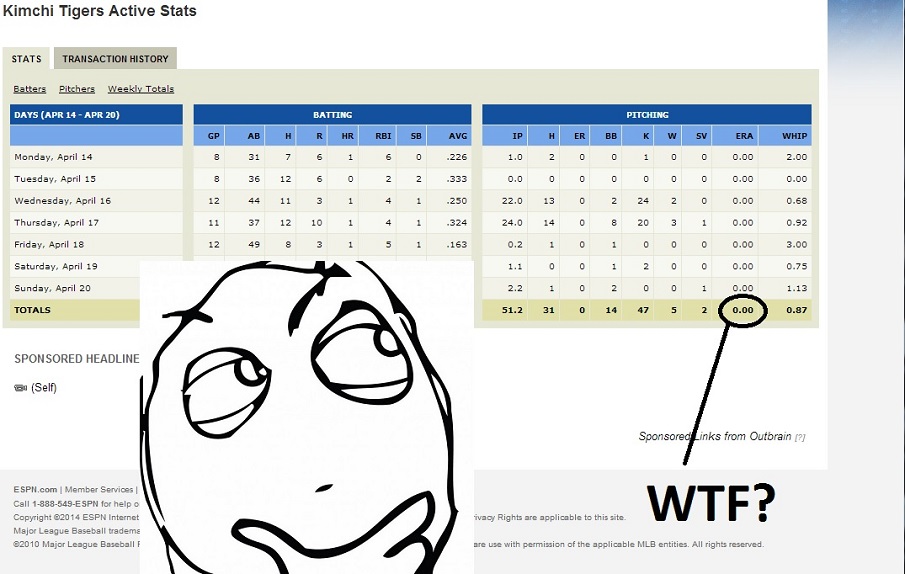 – So yeah, you read that right. This happened in the RCL Magnificent Mustachioed Men. Both Rudy and Grey brought it to my attention, but I feel like there was a good chance I would have stumbled upon this, seeing as how I have a preternatural understanding of all things kimchi. It’s almost as if this team and I were born in the same womb. Well, as you can see, and as Rudy put it, he basically Hershiser’d all over the place. Which I hear is legal in both Texas and Amsterdam. Go figure.

– I know I did this last post, but apparently there was a glitch in the Matrix, or what I also call Rudy’s basement, so we’re going to eyeball the the real top-five teams in transactions and see where they are in the overall standings.

– So this is me quoting me from last week’s post: “I’m really curious about the effectiveness of transactions, activity, and how any of you with 40+ moves have a life. Living in your mom’s basement cuddling empty Milano bags is not a life, if you were wondering. (That’s so much projection, I should work at a movie theatre.)”  Boy, 40+… that was waaaaaaayyyy off. You guys are nuts. And not the good ones like dates. Because dates are actually fun sometimes. You get to drink, maybe have a make-out sesh if everything goes well. No, this is just plain nuts. 148? NIK @Nite… according to the math, that’s an RCL transaction every 3.5 seconds. (I’m not good at math.) Since you’re up 24/7 doing these moves, heads on a swivel bro, this is how Fight Club started. In conclusion, I’ll ask the same question I did last week: Does it correlate yet? Fascinating, as the answer remains unchanged… I SEE A RESOUNDING ‘MAYBE‘. 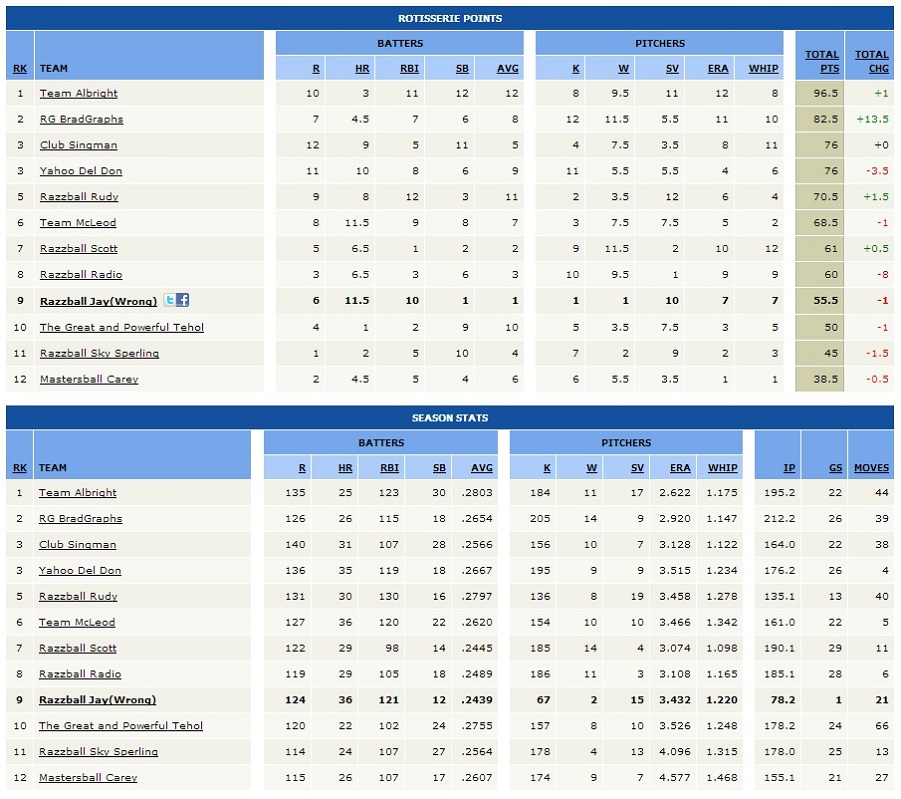 – It’s Grey’s world so far… we’re just living in it. Needs more BBQ ribs if you ask me…