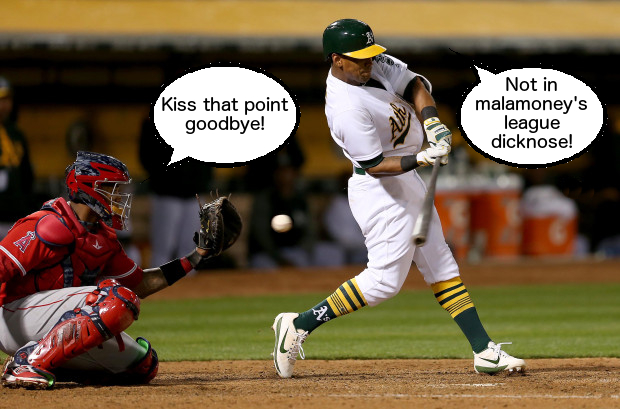 Those that have been reading my points league posts since I started with Razzball a few years back know that I dislike batters that strikeout a lot. I’ve been a vocal supporter of penalizing batters for strikeouts. I have even gone as far to say that if you are in a points league that does not subtract points for strikeouts that you should find another league. In points leagues strikeouts cost you points. Anything that costs you points is a poison. Take a player like Khris Davis. Last year he had about 399 fantasy points, finishing just inside the top 50 batters. Davis struck out 195 times. In leagues that penalize one point for a strikeout, that’s 195 points he lost. That’s as many points as Alex Gordon had in all of last year. Chris Davis with a “C”, had 190 points. Like Khris Davis with a “K”, he also had 195 points deducted for strikeouts.

How would this change the landscape of points leagues? Well for leagues that don’t currently penalize for strikeouts, they would remain the same. Duh. For everyone else, a fair amount of players would suddenly become a quite bit more valuable. Khris Davis’s 399 points now becomes 590 points. And instead of being a top 50 batter, he becomes a top twenty. Giancarlo Stanton and Aaron Judge become the number one and top batters overall. If I’m being honest I am really thinking this is the right move. I can’t believe the words are actually coming out of my mouth. And by “out of my mouth” I mean being typed by my fingers.

Let’s take a quick look at how this rule change would effect this season’s year-to-date rankings. Subtracting one point for a strikeout here are the top twenty.

Without subtracting for a strikeout, here is the new top twenty.

While Mookie Betts remains the top player, there are a lot of the same names in both lists, just in a little bit of a different order. It’s also important to keep in mind that we are only seven weeks or so into the season. The further into the season we get the more I think the list changes. Some players that made the list once strikeouts were ignored are Justin Upton, Mitch Haniger and Giancarlo Stanton. Some players that are considered strikeout hitters that are slowly creeping their way into the picture, falling a bit outside the top twenty, are Trevor Story (156 points) and Khris Davis (153 points).

It’s a lot to chew on, but I’m seeing a revolution being started right here. What do you think? Joey Gallo was overhead screaming “I’m ready to get this shit started!”

Vladimir Guerrero’s starting percentage in CBS is 1 percent. Shouldn’t it be zero? Are there leagues with no bench?

Someone needs to tell Adam Wainwright that his career is over. Maybe move his desk to the basement and take his stapler.

Edubray Ramos. I kinda like that name. Hello my name is Edubray. Hi Ed. No it’s Edubray. You mean Odubel. No, that’s another guy. What do you think all of us minorities looks the same. I bet you think that’s Vladimir Guerero pointing at Maikel Franco.

Rob Deer approves not deducting a point for a strikeout.

I plan to see Solo solo. Is there any other way?

Why is a nickel bigger than a dime?

Does Mike Moustakas own a diner? If so, does Billy Butler eat for free?

Are any of you planning to wait in line this Saturday for Nine Inch Nails tickets?

Has Julio Teheran turned a corner?