Easter Weekend is upon us at my household, meaning there is plenty of delicious food/drink to be consumed, talk of World Series aspirations are still reasonable for my fellow Yankee and Met fans, and my grandfather will be asking me about the merits of investing in Bitcoin. Great times!

We’ve had another exciting week of ball, Mackenzie Gore made his long-awaited MLB debut, holding his own against the defending World Series champs, Clayton Kershaw was pulled from a perfect game (damn pitch counts), and sadly, Byron Buxton is hurt yet again.

Now that we’ve looked at a few shortstops last week that have gained value from the preseason, it’s time to look at some second basemen who have improved their stock from a month ago (in no particular order):

2. Owen Miller – Guardians – This guy wasn’t even drafted in my 18-team home league, so I don’t blame you if you don’t know him. Miller owns a hot 8/2/7/.522/520 slash line as of this weekend. While this guy may just be a hot schmotato, he’s showing a lot of red on his Baseball Savant page below and may be the waiver wire darling of the young season: 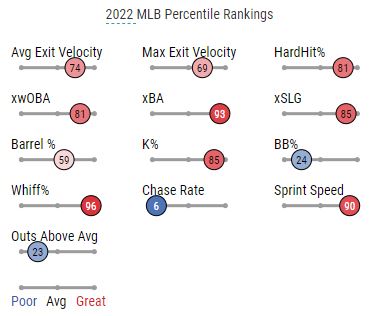 3. Jorge Mateo – Orioles – Grey told you to BUY this past weekend (or earlier, if you’re subscribed to the Patreon). Not all players progress and reach their max potential in a linear fashion. Another post-post-post hype breakout? Maybe. Mateo will likely cost you little if anything, so take a chance on him. While he doesn’t possess the hit tool of CJ Abrams, his 40+ steal speed can similarly be a game-changer if he gets on base a little more. The Orioles will likely give him ample playing time (who else on the Orioles will be squeezing him for playing time). Mateo has triple 2B/SS/OF eligibility in Yahoo.

4. Gavin Lux – Dodgers  – Lux has been playing more than I thought he’d be at this point, and currently has a 6/1/5/.381/.462 slash line entering play on Saturday, showing some pop and speed. If you’ve snagged Lux at the end of your drafts, you have to be feeling pretty good. Lux has a couple stolen bases over his last couple of games. Lux also has triple 2B/SS/OF eligibility in Yahoo.

5. Jurickson Profar – Padres – Profar has been an afterthought in many drafts, and currently owns a 3/3/9/.269/.394 slash line, while eligible at 1B/2B/OF in Yahoo. He’ll never reach the heights we once dreamed of, but he can still be a useful player. Ride the wave while you can.

6. Tony Kemp – Athletics – Kemp has been batting at the top of the Oakland A’s lineup. He fits the A’s mold of a pesky leadoff hitter that doesn’t strike out much and holds his own with regard to OBP. Given a full season’s worth of at-bats, Kemp can reach double-digit homers and chip in some steals. Definitely a useful player for a deep league.

That’s it for now, here’s to the next week of games!

Watching what little I have. Mateo can win the stolen base crown.

I wonder what he did in the off season? He looks to be a different hitter. I didn’t read much on him.

Owen Miller has come out of no where, I did read he made hitting adjustments which could be why he might be real. All that red is intriguing. The K% along with the other reds, tell me something real maybe happening.

In Mateo’s case, I wonder if he’s been assured by Orioles management that he would get a full season’s worth of at-bats, so maybe he’s not pressing? He did bounce around/get traded a few times, previously spending time with the Yankees, A’s, and Padres in recent years. In Miller’s case, he did have a hot spring, but seems to be making way more hard contact. I think Miller’s hot streak is more legit, than say a hot streak we’ve seen from Profar.

5×5 dynasty… drop Villar and pick up Estrada? Great read by the way!