If you missed it, we went over Overvalued players in last week’s Deep Impact post.

This week, we’ll be going over guys I think are either going too low in drafts, or have some sort of stigma that’s keeping their cost low – undervalued in their current state. Remember, it doesn’t mean they are the elite bombz. Like I said last week, the most important aspect in advanced leagues is value. That’s what our goal is here. And depending where you are in your league, these summaries can either help you find some sleepers in an inaugural draft, or, if you are already some x amount of years in, you can look to these guys as good trade targets.

Yonder Alonso — Also to be covered this Thursday for Under The Greydar, the teaser is there’s still power projection left. No one wants to touch this guy, as he’s going over 100 picks after Anthony Rizzo, but I will. Because I love touching people. Mostly in their bathing suit areas. Most people will draft him like a poor man’s Travis Lee, but I see him closer to Mark Grace this year and beyond. His HR/FB was pitiful last season, and if regression occurs, we can see upwards of 15-20 HR’s to go along with a strong average. You know who also had this same exact type of problem before the regression dragon happened last year? Chase Headley. You want to know more? Better tune in this Thursday son! He’s a good bet to be a stronger play in OBP leagues or ones that use advanced cat’s like Total Bases and Abyssinian’s. Meow.

Joey Bautista — While I doubt there is going to be a huge discount, I’ve seen some of his value deflate because of the wrist injury he suffered last year. As we all know, wrist injuries for hitters are like shoulder injuries for pitchers are like my relationships with women — crazy bad news. Let me put my doctor’s hat on for a moment. Bautista damaged the sheath around his ECU tendon. ENGLISH! Basically, the important part here is that it wasn’t a complete tear of the tendon, which would lead to bigger issues. It was more like a dislodgement. While Mark Teixeira is in the news for the exact same thing, from all the reports on JoeyBats, it appears that he no longer has discomfort, has regained his muscle strength, and that full motion is just about back. While I don’t really pay attention to spring training stats, it is nice to know that he’s hit five homeruns as of this writing. The wrist injury was bad, but it wasn’t as bad as it could have been, therefore, buy with a quiet confidence. Now, more importantly, where did my handsome hat go? Trick question! It’s always on.

Everth Cabrera — I put Cabrera here because he’s useful if utilized correctly and always comes cheap. So what’s the correct way to use him? Mail courier? Escape-on-foot artist? Perhaps. When you think about it, there are three life certainties — Death, Taxes, and a dearth of talent at the MI. So, if you’re like me, I usually just punt/drop-kick the MI all the way to the back-end of the draft, and use those positions to try and find guys who can help me fill gaps that have developed on my team during said draft. In Everth’s case, he’s my go-to speed guy. You don’t draw too much attention by hitting .246 with only 2 HR. And you still may remain hidden if most of your 44 SB came around the end of the season. In 39 games after August 16th, he stole 25 bases. Read that again. In 39 games, he stole 25 bases. Read it eight more times, it’s still crazy-talk. While his contact rates and K% don’t really leave room for much offensive projection, under a full season, he could net you up to 50+ SB. I’ll find my average and homerun edge elsewhere with that amount of cheap speed.

R.A. Dickey — I just don’t think people trust him as the top of the rotation starter that he is. But their loss is your gain. Moving to the AL East, to a more hitter-friendly pitching environment, and combined with the volatility of knuckle-ballers in general, this can and will depress his value. But I see people are getting too scared too easily. Out of all guys listed here, this is probably the one that depends most on my gut call, but there is supporting evidence to go with my gut. Like 9 years of Black Label intake. But I think the guy is RAD. See what I did there? Impressive. If you look at the last three years to peg a conclusive blurb on his talent, he’s shown great control (6ish BB%), a good ground-ball rate (50ish %), and with three different speeds on his knuckler, something we’ve never seen before, there is enough evidence to support a K% north of 20%. While regression is due, the value will be diminished enough to still buy at a good price.

John Jaso — Ah yes, my once long lost love. Platonic love! I swear. He was actually my second post topic ever here on Razzball, and I think the first ever 1000+ word post ever written about Jaso in general. What can I say? If I were a rapper, you would call me Coolio. If you go back to what I wrote, much of what I said still holds today. The only difference is that now he’s in a situation where he will be the majority starter and his rate stats will now be backed by a full season’s worth of counting stats. I never spend on catchers in general, and Jaso fits perfectly into that strategy.

Nick Markakis — Yes, there is not much love for this guy. But I have to put my foot down, because standing like this is embarrassing. Why is it that Andre Ethier is being drafted, in most cases, 3-4 rounds ahead of him? Oh, did you actually want the answer to that? Don’t look now, but I’m about to chart you. Take a look at this.

I don’t see much of a difference. Yeah, I mean, a little less homeruns for a bit more steals. But nothing that deserves a 30-45 spot penalty on the draft board. And perhaps even more interesting, Ethier’s career slash stands at 290/362/476 while Markakis’s career slash is 295/365/455. Keep in mind that Ethier’s platoon splits are not getting any better either (career 238/296/352 against LHP), and he might start seeing fewer AB’s. While in reality the two players are a flip of the coin, in actuality, they aren’t being perceived that way. Pounce on the inefficiency. Or bounce if you’re a big n’ tall.

Daniel Murphy — Remember what I said when I mentioned Everth Cabrera? The same applies here. In fact, here’s something to ponder upon. Nifty chart time!

Now, the production is pretty similar. Yeah, about 50 more RBI’s with the #2 choice, but think about the price here. Numero uno is Daniel Murphy and Everth Cabrera, both players you can buy late in drafts. You know who #2 is? Is the suspense killing you? It is none other than Jose Altuve and Elvis Andrus, both players you cannot buy late in drafts. Something else to think about is the fact that Everth is going in as a starting SS this year. He did all of his damage in 2012 without even reaching 400 AB’s. This is why they said math was important, in case you were wondering.

Will Venable — What? Multiple Padres on this list? Say it ain’t so! Yup, but I just had to. Much has been pontificated upon with the PetCo fences coming in, transforming the Grand Canyon of baseball parks into, err, a little bit of a smaller Grand Canyon, as illustrated here: 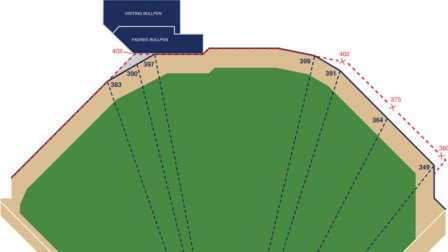 The most drastic changes will be, as you can see, in right-center to right field, where the fences will be brought in 11 feet and lowered from 11 to eight feet. While I refer to these as ‘drastic’ changes, they will most likely only have subtle changes in the numbers of the players (mostly left-handed hitters) who reside in that park. But in their case, any change is good change. Though, specifically with Venable, if he only sees marginal improvements in his HR/FB rate, say a realistic 5%, that’s another 5 homeruns right there, making him a credible 15/30 threat. Going at an average of 365 off the draft board… well, you see why he’s here.

That does it for our Over/Under-valued season primer. With the start of the season coming up, we’ll be going into regular mode. What, might you ask, is regular mode? And, better yet, why are we not going extra crispy up in here? That’s a fantastic question. Let’s go into extra crispy mode instead. If you need any deep league info, this will now be your home. But you’ll have to take your shoes off as I don’t know you that well. So maybe don’t touch anything in the fridge either. Actually, you know what? Just stay outside. I’ll open the window and yell in your general direction.

We’ll be going over players who are owned less than 15-20% in your ESPN/Yahoo/CBS leagues, and always keep advanced setups on the peripheral. And we’ll even delve deep into the prospect forest. I’m talking outside of the Top-100. For example, do you want to know who the next Jurickson Profar is four years from now? (Granted, with a little more power and a little less athleticism, and more a third baseman than a SS. Yeah, I know it’s not a good comp, but I wanted to keep it in the family.) Anyways, keep your eye on Jurickson Profar.

So, I hope that gets you excited, because I want you to bring the whole family. One free hug and dry-hump to each! And that’s from the heart.