Jay has so kindly asked me to take over this series for him.  He is passing on the metaphorical golden baton onto me.  I’m going to coat this puppy in silver, because gold is tacky.  To start things off, I decided talk about a guy who I think flies under the radar, Madison Bumgarner.  First off, how awesome is his name!?!  That’s reason enough to buy this guy.  Who names their boy Madison anymore?  Awesome parents, that’s who.  If you’re actually curious about baby Madisons, click here.  Don’t ask why I know about that website, all I know is that it’s super interesting…at least to me it is.  Back to our topic now.  On top of Madison, his last name is Bumgarner!  He is literally collecting booty, c’mon.  Oh look, a double entendre, I’ll clarify.  He is married, so I think he is all set on that booty front.  As for Pirate booty (Giants booty?), he is squared away too.  He signed a 5 year, $35 million contract after his second full season, at age 22!  YARGH, that’s a lot of booty!

I want to say that I think the Giants are cursed.  They had a crazy top three rotation in 2011.  Tim Lincecum went down swinging in 2012, and Matt Cain followed suit in 2013.  Is this the year of the Maddy Bum?  Nah…It can’t be…I hope not.  I have him in a couple leagues right now, so he isn’t allowed to suck.  If he does, well then I’ll probably just cry and watch reruns of Friends while I eat a pint of Ben and Jerry’s Ameri-Cone Dream.  That shizz is awesome.  Anyway, I’m here to talk about Bumgarner, not my Saturday nights.

I don’t think Bumgarner gets enough credit.  Since 2005, he is one of only fourteen pitchers to break 180 innings in a season before 22.  In fact, he did it twice before he was 22.  The only others to manage that were Cain and Felix Hernandez, who actually managed to pull it off three times.  Should I raise the IP limit to 200?  Yeah, let’s do that:

What?!?!  That looks like pretty elite company to me, and he killed it.  Now one of you is going to say something about blowing his arm out.  Well I’m not buying that.  He turns 25 near the end of the season, and he hasn’t missed a single start since his full time promotion in 2010.  Go try to find an injury on him.  You won’t, it’s not there.  No day-to-days, no nothing!  He has a cleaner slate than after I got my juvy record expunged.  There is currently a warrant out for my arrest for stealing some ice cream.

If you were worrying about his pitch velocity, there’s no need to fear, velocity is here!  All of his pitch speeds are either stagnant, or slowly rising.  His slider velocity has seen the most improvement, going from 84.4 mph in 2010 to 87.5 mph last year.  Speaking of his slider, it seems like it his most important pitch.  Here is his pitch usage since 2010 (along with his K/9 each season):

He has been using his slider twice as often since 2010, while his fastball usage fell.  When he started cranking out his slider, his K/9 rate grew by over 1 whole K/9!  Okay, when I say it like that, it sounds underwhelming.  What if I said his K/9 rate went up over 20% from 2010 to 2011?  Does that sound more convincing?  I guess Mad Bum learned he has a pretty gnarly slider.  Since 2011, his slider has been the best in baseball in cumulative runs saved (48.9).  That being said, I don’t see him getting up over the 9 K/9 hump, which is the only thing keeping him from becoming a super-mega-ultra-elite pitching option.

I also want to give a quick shout out to Mad Booty’s WHIP and SwStr% (Swinging strike percentage, for all you non-nerds out there).  I made this Giants-themed graph for him, look at those pretty colors.  I also taught myself how to make double Y-axes in Excel for this.  I love Excel more and more each day: 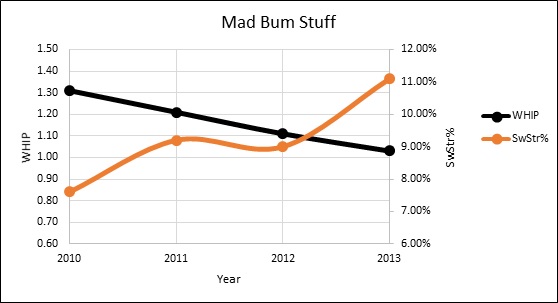 It doesn’t take a rocket scientist to see everything has been heading in the correct direction.  But it’s a good thing I have that rocket science degree anyway; my mommy always taught me that it’s better to be safe than sorry.  I don’t think the WHIP will keep going down nor do I think the SwStr% will keep going up.  But I think they should end somewhere between his 2012 and 2013 levels.  Definitely not complaining over here.

Right now, Bumgarner’s ADP is 48.4, which is good enough to be ranked as the 11th best starting pitcher, sandwiched between Chris Sale and David Price.  Monsieurs Gilpin and Albright have him ranked 7th and 7th (respectively), which is probably close to where I would put him too.  That means he will be available around the end of the 4th round/beginning of the 5th round.  While he won’t give you super elite K’s (200 is near ceiling), he will give you peace of mind, which is more than you can say about some other high ranking pitchers…I’m looking at you, Max Scherzer, Stephen Strasburg, and Cliff Lee.  He has a good deal of upside, especially for such a high ranking pitcher, and is in my top five for pitching keeper options.