Welcome to the glamorous “anniversary edition” of the downloadable Razzball Excel War Room. Has it really been ten years already? Google tells me a tenth anniversary is traditionally marked with tin or aluminum, but I’m going digital instead…hope you like spreadsheets!

Credit goes to the originator Lou Poulas and a host of other update authors over the decade. Time flies, as this marks my fifth year updating and tweaking the file (!), I’m proud of the features and colorful interface that I’ve implemented to make the tool more usable to navigate in a fast paced, high-pressure draft. Thanks also to Knucks who jumped in starting in 2018 for tedious data compilation for the dashboard tiers and has done so through 2020.

This file supplements the copious 2020 fantasy baseball draft tools and online fantasy baseball war room available on Razzball. I used to claim it was the “ultimate drafting tool” to track goals and keep track of how other teams are doing, but that was before Rudy made his own draft-dominating war room spreadsheet available for subscribers. Rudy’s version is geared towards roto leagues, so you may still find this Excel war room more closely suited to your league’s format – for example, points leagues with custom scoring are easily accommodated here.

If you plan to skip most of the info below, take this one tip with you: check out the 2020 changes, then bookmark and keep checking this page throughout the pre-season. A few bugs usually pop up, and I try to address these as they come up. The most up-to-date version will always be posted at the bottom of this post, before the comments.

KNOWN ISSUE: When is Will Smith not Will Smith? When one plays for the Braves as pitcher and the other for the Dodgers as catcher (a baseball version of Gemini Man?) The fresh prince is displayed with the same name across Razzball, creating a tiny issue in the Excel file based on how I currently have lookups coded to get data from the site. To fix permanently I would have to change the lookup formulas for most of the Players tab; for now, as a workaround, I temporarily changed the pitcher to display as “Will Smith PITCHER” across the war room. This will work just fine if you leave things as are and don’t update data connections. However, if you refresh data connections, the dashboard RP ‘Will Smith’ will not cross off properly and the Players tab will not pull pitching stats for pitching edition of Will Smith. But it will still keep two distinct Will Smith, one hitter and one pitcher. If you are updating stats you probably aren’t as concerned about the dashboard accuracy since tiers are hard coded and do not update anyhow.

The usual snazzy features of the Razzball Excel War Room: 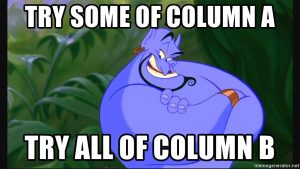 A few of my personal tips:

In all honesty, everyone will use this spreadsheet differently. I personally never look at the ‘War Room’ tab during the draft, only the Dashboard and Players tabs, sometimes it is a slog just keeping up with drafted selections (especially with any auto-draft picks!) But the functionality is there if you want it, and in a slow draft you can really maximize the analysis.

Remember to enable macros / enable content if prompted by Excel security warnings, to be able to use “Lock Projections” button on User Input tab and other features.)