Fantasy baseball players typically settle into three different camps on how they ‘run’ their snake drafts:

I have always been a Spreadsheeter. A couple years back I had a couple of epiphanies related to draft strategy (detailed in my 2020 LABR Mixed Draft Recap – search for DARWINISM) and completely overhauled my ‘draft room’. After some early success, I started sharing it with the Razzball writers for their industry leagues. Last year, I added it to our season-long subscription package. The response has been better than I expected given how different it is from the standard draft room.

I have seen my fair share of others’ spreadsheets. My experience with fantasy draft software is more limited. Between the two, I have seen enough (including those built on our site by developers and commenters) that I have a good idea on some of the more common approaches/standards. I think there are several flaws in these standards and will show how and why my Draft Room is better. If you are a Traditionalist, my guess is this post will not sway you but at least it will give you ammunition when mocking the guy with the laptop next you on draft day.

The one thing I am not going to do in this post is share Excel tricks or how I calculate various things. While I totally respect and identify with those of you who are DIYers, that is not our focus/passion at Razzball. I mean we want to teach all our readers how to fish. But we would rather build you the tools so you can have fun on the lake with some brewskis versus give you detailed instructions on how to build your own rod. This post may still inspire some of you DIYers to make changes though and, if you are really into DIY, I recommend my friends Jeff and Tanner’s book.

Here is a snapshot of my 2020 Draft Room. I have set it to the pick before mine in the 2nd round of the LABR draft. You can click on this image to see it full-screen. If you are looking at this via phone, it will be tough. Just skip this part for now and focus on the content under the image. 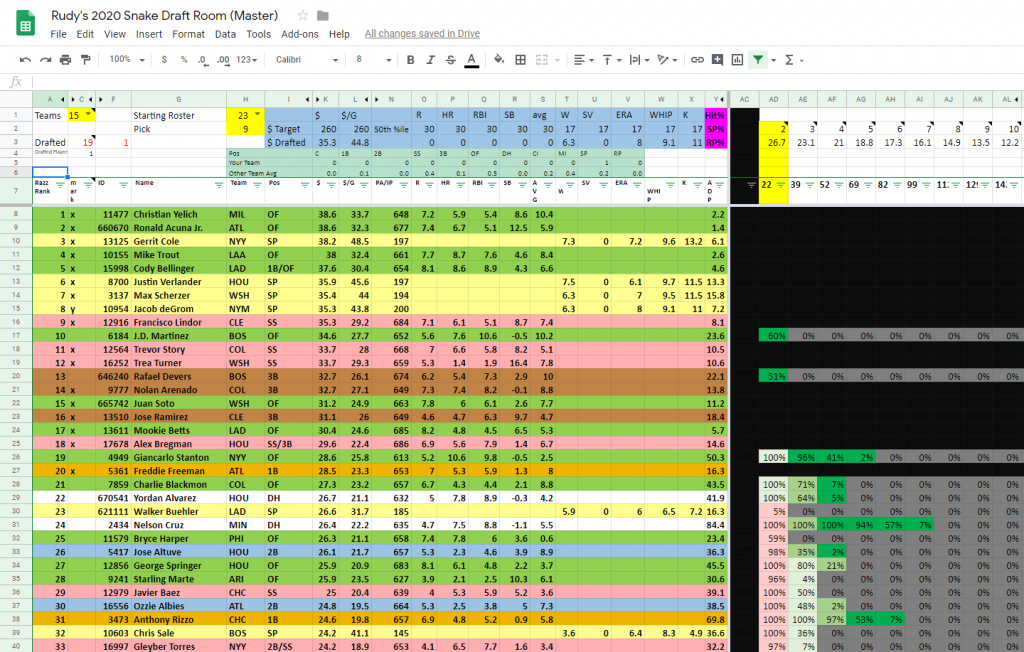 I know. There is a lot going on. Rather than make this a boring tutorial, I am going to focus on the areas where I think most people get it wrong (and I feel I get it right).

Doing It Wrong: Preparing By Mock/Low-Stakes Drafting & Fixating on ADPs

Doing It Rudy: Offline Review Of The Draftboard Looking at Player Availability Probabilities

Everything starts with how one prepares for the draft. If all of your prep is just ranking/tiering/valuing players, you are not preparing yourself properly for the hard Player A vs Player B decisions one has to make during a draft nor do you have an actionable plan for handling macro issues like “When should I draft SS?” or “How do I ensure I get enough speed, power, saves, etc?”

For those that do draft preparation, one standard approach is to do mock drafts. I think mock drafts involving human drafters are absolutely useless. There is no way for me to trust that all the people involved are drafting as if this was a real team or just experimenting. It becomes increasingly likely that as the draft goes on, more of the drafters are mailing it in.

Draft ‘wizards’ where you draft against simulated drafters informed (one would think) by Average Draft Position are an improvement. For one, they are much quicker. While the drafting might be more conservative/predictable than a real draft room, at least it is realistic. Lastly, since there is no social pact to complete it, you can abandon the mock draft once it has served its purpose (i.e., you determine a draft strategy is faulty after the first 10 rounds).

A third method I have heard is participating in low-stakes best balls like Fantrax’s TRAX 10. I think this is a great approach for better understanding the draft pool but not an ideal way to prep for a season-long league where draft strategies are different.

The fault that all of the above share is they are too rigidly constructed around draft rounds and selecting one player per round. For me, evaluating players and formulating draft strategies is a circular process involving multiple variables such as positions, categories, and player values. Often, I want to constrain one or more of those variables and then look across all rounds at all attractive player options (e.g., players I value more than the market).

For example, below is a filtering of all Shortstops with plus speed ($5+ SB) ranked by overall $ value. To the right, I have the first 12 rounds and the percent likelihood the player will be available at my draft slot. Green represents very good value. Red is awful value. The percentages leverage the min/avg/max picks in NFBC ADP which I update constantly throughout draft season and I find more informative than just ADP. In this draft (where I pick 12th out of 15), my first choice could be taking one of the top 3 SS if they fall to me but I have multiple options to consider throughout the first 12 rounds. (In LABR, I ended up with Andrus and Newman).

In a nutshell, there are not enough hours in the day to prepare for every draft situation since every draft is going to be unique. Mock drafting is inefficient and insufficient (shout out to Walt Frazier) at preparing for all the possible ways a draft may go. Using the Razzball Draft Room, you can easily identify multiple candidates for any combination of category value/position/round/likelihood of being available in advance of the draft to avoid having to make hard decisions on the fly while still having a strong support system if/when you need to pivot in-draft.

Doing It Wrong: Adding up projected stats and comparing vs ‘targets’ derived from previous year(s) stats

Doing It Rudy: Sum my Category Dollars and compare vs fixed dollar targets

Apologies to those of you who were nodding along with my takedown of mock drafts and now are thinking “What the f***? You are coming after projected stats and targets?”

Let me start with what I think is the ideal and then it will be clear why I think the standard practices are flawed:

I achieve all five in my Snake Draft Room by:

The standard practice is flawed because:

Doing It Wrong: Tracking other teams’ picks and/or looking at In-Draft Standings

Doing It Rudy: Just mark players as drafted and focus on your category dollars

Don’t get me wrong. I cannot stop myself from looking at post-draft standings even though I know they are garbage. I do not put any stock in them. I am just so amped after a draft that I devour all content – whether it be leaguemate reviews or post-draft standings. I might create my own too.

I know it is a disorder BUT it does not affect my draft.

You should spend as little time as possible on draft board maintenance. I want to mirror the Traditionalist experience of just crossing out one’s name on a list.

Both taking the extra effort to assign a team (even choosing from a pull-down menu is more work than ‘x’) and looking at in-draft standings are time better spent looking at your notes and coming up with Plans A/B/C/D for your upcoming pick.

In addition, if your goal (like me) is executing the ideal team for me vs ‘winning the draft’, looking at in-draft standings is the LAST thing you want to do as it will bias/impact your decision-making.

Basically, I DO NOT CARE how the other teams are looking. Completely irrelevant. I just need to track how I am doing. The draft board itself is easy enough to determine whether teams who are between my next two picks are likely to be targeting the same player as me – e.g., one of my only reaches was on Elvis Andrus as there were still 1-2 teams with SS/MI openings and could use speed). One benefit of focusing on the draft board is you don’t space out and miss any players being drafted.

Doing It Wrong: Only measure players by season-long value

One way I always evaluate my drafts is balancing upside with reliability. If anything, I am pushing myself to draft more upside than in the past – particularly with late picks. Stated quite simply, I feel like I can always backfill with stat accumulators in FAAB so better to take shots late in draft at upside.

I think all drafters are balancing upside/reliability but can get lost later in drafts because how do you identify upside?

As I noted in a recent post regarding a trade analyzer enhancement, a total value (like my $ value) based in performance AND playing time. My draft room comes with $/Game as well which neutralizes the playing time and is, thus, a great measure of upside. Late in drafts when I may be running low on targets, I will find myself filtering on this column for, say, $5+ $/Game players who are still available.

Last note: If you are interested in using my draft room, it is available as part of the season-long Roto Deluxe and DFS Premium packages. Season-long packages start at just $24.99 and this draft room is just an appetizer (or maybe an amuse bouche?) vs the main course. You are also getting daily/weekly projections throughout the season in an easy-to-use tool. Our subscribers range from the most competitive players in friends & family shallow mixed leagues to high stakes players.

You can only choose one level from this group.

You can only choose one level from this group.