It’s time for my first (and longest) post of the year. My LABR Mixed draft review.

As always, thanks to Steve Gardner at USA Today for the invite.

Last Year Recap (here’s my post-draft writeup)
Yet again, another competitive season (92 points) but outside the top two (6th place out of 15). The last 5 years I have scored between 87-102.5 points and finished between 3rd-7th.

This is not for lack of trying or being too conservative. Sometimes you barrel a ball only to end up with a double off the Green Monster vs a home run.

One year after basically throwing away a 4th round pick (Darvish 2018), I ended up getting absolutely nothing from my 2nd round pick (Stanton). Combine that with a 10th percentile bad outcome with my 5th round pick (Daniel Murphy) and it is a marvel I was in the top half of the standings. The rest of my early picks were solid to very good: deGrom (#1), Rendon (#3), Mondesi (#4), Robles (#6), Vazquez (#7). I hit big on two later picks with Austin Meadows (#14) and Christian Vazquez (#28). I do not recall any major in-season pickups but I imagine I did pretty well in that regard. I traded Mondesi for Hoskins once my SB lead was secure but Hoskins struggled. Traded Robles late for Bryce Harper which worked out okay.

Congrats to Steve Gardner on the win and Zach Steinhorn on the tough 2nd place finish (crazy last week).

This Year’s Draft – Pre(r)amble
As fantasy baseball touts/analysts go, I am on the ‘quant’ side.

I do not say that in a boastful way because I do not see this as a universal positive. Being good at math/Excel/etc is a helpful skill if applied correctly but I think all fantasy owners’ draft strategies, player evaluations, etc. have their flaws. A quant is just more partial to certain types of errors than someone who bases their decisions more on gut, scouting, etc.

I think 2020 might be the last year in a three step evolution of how I draft. I imagine most quants have similar Step 1s as me but not sure how unique the next two steps are. These are the three stages of my evolution. I made the last step an acronym to avoid the wrath of the Fantasy Analyst Trade Writers Association (FATWA):

Step 3: DARWINISM (Drafting A Roster Which Integrates Needs (of) In Season Management)

Some notes on DARWINISM:

Delineating this as three discrete steps is misleading in that obviously I considered my in-season roster needs even when I was mostly ‘value-based’ drafting. Back in the 2014 time frame when I created the Streamonator and Hittertron tools and did deep dives into RCL team performance, it greatly impacted my draft strategy for shallow mixed leagues.

While I applied those lessons to some degree to my 15-team mixed game-play, I think most of my application had been in optimizing in-season rosters and the weekly FAAB process vs how I draft. One step in the right direction was focusing on relative category balance which mirrored my in-season preference of avoiding major roster weaknesses so I can focus my FAAB on ‘best players’ vs ‘needs’.

Here are a couple of in-season lessons/preferences in the voice of Manager Rudy that General Manager Rudy has incorporated into his draft strategy for 15-team mixed with weekly pickups over the years:

I have designed it to anticipate the tough decisions so I can prepare ahead of time. I am leveraging ADP to predict the likelihood a player is available in each round. Through prep and the tool, I am doing my best to avoid being in a position in the draft where I am chasing a category or position and I am dependent/desperate for a specific player to make my team whole. Those are the cases where you have to overdraft the player, get lucky, or scramble.

I do a handful of mocks and I end up with a general script for the first half of the draft. I try to have contingencies on every pick. This isn’t set in stone. If a great value falls my way, I adapt. The goal is to minimize scrambling or realizing post-draft that my team has a major hole.

Here are the full results of the 2020 LABR Mixed League Draft. 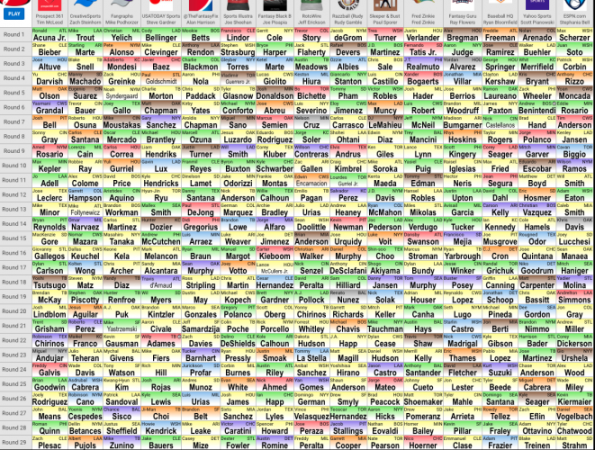 Below are my picks compared with NFBC ADP:

I have used the same post-draft writeup structure for a while now as I find it more interesting than a pick-by-pick analysis and most readers seem to agree. This format does mean I talk more about my competitors’ teams than most post-draft write-ups. I do my best to be respectful yet honest.

Last note:
This was definitely my worst draft in recent memory from a pure projected $ standpoint. To be honest, I am not 100% sure how to even value SP/U Ohtani. I just used his SP value. I ended up having one team projected a little ahead of me in $. I look better in my $/Game metric which is not surprising since it more accurately reflects my draft strategy.