It’s really hard not to overreact, I understand.

With that said, I think that it’s best Madison Bumgarner was the human highlight reel of opening day as opposed to somebody like Mallex Smith or Tuffy Gosewich(!!!).

The early season star of 2016 was the pun machine himself, Trevor Story. I’d consider him a best case scenario for any early season performer. Six homers in his first four games, on his way to a 27 home run season over less than 400 ABs. Story was a top 30 pick this year, all after that early season explosion, and I’ll admit, there was a league where I paid that price for him.

With Bumgarner holding the headlines for the next few days, there is no need for overreaction and desperate projection for his rest-of-season value. We know what he’ll give back. Very, very good value.

Is there a chance somebody else stands out? Of course, and you’ll likely have to make a tough decision to give up that ’25th’ man on your roster as sacrifice if you want to believe in the hype…

My philosophy with this first week of action has always been to take a deep breath before making a move in daily lock leagues. Think big picture, let a few games play out, and then reassess. With pitchers, it generally takes about three to four starts before peripherals to normalize. That’s substantially more time than it will take your average league member to pull the trigger on this year’s polished arm. As with everything in fantasy, we’re artists balancing risk and reward. As I sit writing this and watching the Cardinals-Cubs matchup on Sunday night, I can already tell the two offers I had working for Carlos Martinez are going to regress from just about finalized to just another inquiry the owner will reject.

The one thing I’m okay with overreacting to?

Closers. Jeanmar Gomez comes to mind from last season, but we’ve already seen three closers look shaky and Sunday only brought with it three games. If tomorrow slate of 12 games shows 12 more closers looking shaky, I still won’t stop playing fantasy baseball. Frenando Rodney, Mark Melancon, and Sueng-hwan Oh all failed to impressed. Good to know SAGNOF is alive and well. But seriously NFBC, Oh at 70th overall? I saw that stinking from a mile away.

We’ll see a ton of ace versus ace matchups that will draw the attention of every fan imaginable, so after highlighting one matchup that everybody should be watching on Monday, I’ll turn my focus to a duo of lesser publicized duels.

Going to be very hard not to put this one on. Kluber is notoriously slow out of the gate and Darvish is coming off the best peripherals of his career last season shortly after recovering from Tommy John surgery. What I’m particularly interested to see is if Kluber’s bad spring comes to a quick halt (6+ ERA), or if rumblings of fatigue are sticking around from his 2016 workload (249.1 IP). As much as a player will say that isn’t an issue, we saw what happened with the New York Mets’ staff last season and it wasn’t pretty. I’d consider the Indians lucky if they can make it to July with only Kluber acting as the blip in the wheel of consistency.

Darvish on the other hand? Just sit back and enjoy the menu of pitches he has to offer. An early Cy Young favorite in a tough matchup to start the year. Baseball doesn’t get much better than this.

Pretty simple on this one, both are starters who garnered substantial sleeper talk in drafts, and this is our first chance to react to our investments. I’m most interested to see how Richards potential ‘pitch cap’ plays out in a real game. One of the factors holding back my love for him was that I’m irrationally worried we won’t see many 6+ IP starts early on. How confident are we that Mike Scioscia won’t look at Richards with ~80 pitches after four innings and a few runs on the board and pull him with the long term in mind? Managers rarely get criticized for cautiously pulling a pitcher coming off a procedure like Richards, but will take all the heat imaginable if they push that same starter five pitches passed an ambiguous threshold.

With Jharel Cotton, many have cited the outstanding changeup he mastered on his way to a 2.15 ERA over 29.1 innings. Although Grey had him ranked passed 300 overall, our Razzball projection of a 3.72 ERA with a 1.21 WHIP are pretty encouraging for a matchup based streaming option. Cotton has a good chance to shine in a matchup against the Angels at home. This will be a fun one to watch, even if the teams involved may not allow for the word fun to precede them much this season.

Everybody’s favorite spring hopeful gets the chance to display his improvement in his home park. While I have been vocally skeptical of Taijuan Walker overall, due in part to the park and my general disdain for encouraging Spring performances, I will admit it’s appealing to see a former top prospect with some intriguing storylines. He seems to be fully healthy after the removal of bone spurs removed from his foot (see below), and comes into 2017 with a refined approach in the form of new mechanics and an improved slider. As with the last time we drooled over Walker’s Spring outings, I need to see it before I believe it.

Matt Moore on the other hand is a similar pitcher when you dig back into his past and unearth the prospect hype that followed him with the Rays. Razzball’s projection is giving Moore a similar line to Cotton, but with a better chance for wins and another 100 spots of ADP on the big board, likely due to the park and potential for more strikeouts (10Ws/3.77ERA/1.29WHIP/137Ks). 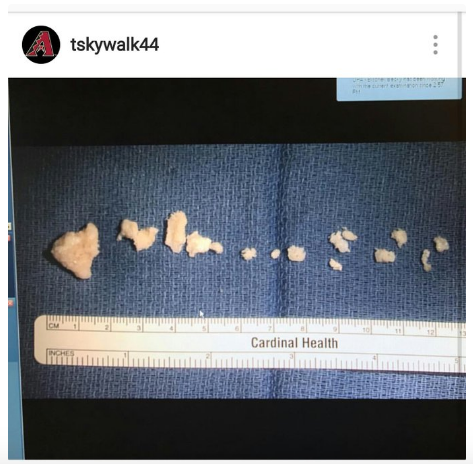 On top these pitching duels, let’s see if our pre-season health concerns quickly fade or stick around.

A.J. Pollock did a fantastic job of dispelling any pessimism with a home run Sunday. He also did his best to make me wonder if we were all overly concerned with the extent of his injury history last season. If there is one thing I know, it’s that Pollock + DBacks = Wins. The one thing even with this big game to start the year, it has been a full season since Pollock played 155+ games. We often overlook the re-acclamation period a lot of players go through after they make their way back from an injury. It’s early, but if I had significant exposure to Pollock and he starts off hot, fielding offers may not be the worst of ideas.

In Michael Brantley’s case, if I’m mildly concerned with Pollock quickly getting back to 155+ games, that has to be significantly elevated for Brantley, who has pulled the rug of hope out from under our feet more times than I can remember in the past year and a half. In the back of my mind, 100+ games still seems like a baseline for a successful 2017 comeback with, but the under on the century mark wouldn’t stun me. Bad news? Well, not if Bradley Zimmer is the beneficiary if Brantley were to go down. SAGNOF!

I wrote about Gergory Polanco two weeks ago, before news broke that he is dealing with some shoulder soreness, the same ailment that cause him to rest multiple times last year down the stretch. I’m still very high on the Pirates outfielder, but have found myself keeping a keen eye on Austin Meadows if in fact Polanco were to miss an extended period of time. God forbid Meadows comes up and rakes, then the pressure would be squarely on McCutchen to perform or make Pittsburgh a former abode.

If there is any injury I am most confident about meaning very little, it might be Carlos Carrasco’s. Maybe it’s because I have more than a few shares of him in higher profile leagues, but my possibly misguided optimism stems from the fact that players like Carlos Rodon and Roberto Osuna hit the *new* 10-day DL and Carrasco didn’t. If the Indians were concerned in the slightest that Carrasco wasn’t 100%, I don’t see why they wouldn’t have given him a few more days rest, especially if their goal is to get back to October. Carrasco takes the hill Tuesday in Texas. A tough matchup, but one that if Carrasco comes out from without a grotesque line, I would be pretty encouraged by. Here at Razzball, we still have him projected for a 3.28 ERA with a stellar 1.11 WHIP and a K/9 just over 9. A lot of that upside may ride on health, but fingers crossed for the stars to align in 2017.

Enjoy the full slate of glorious games this week.