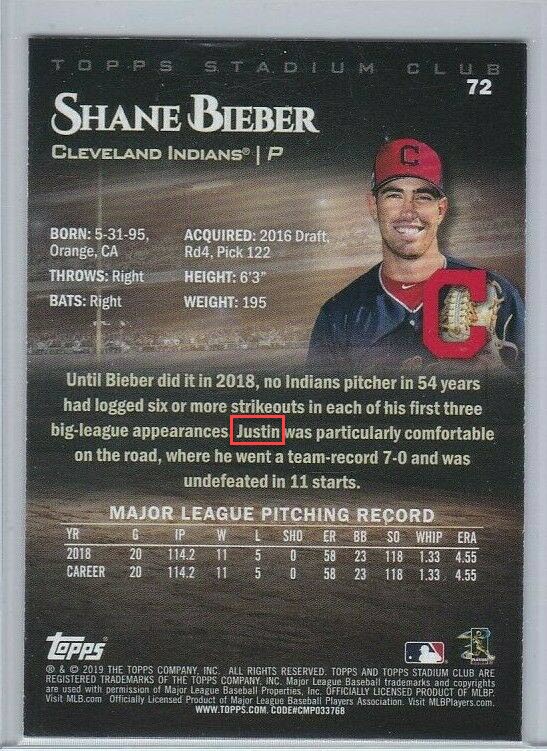 For the second straight year, the Topps card company struggled to remember which Bieber plays baseball and which one is a pop star. At least Shane seems to take it all in stride, just look at his uniform from last year. 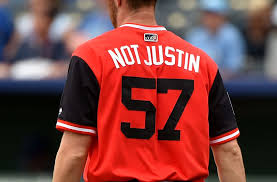 Since the start of July, outside of one start at Minnesota, Domingo German has been great. Of course, that doesn’t help your numbers recover from that Twins start, but with almost every pitcher getting lit up on occasion, it’s about what they do to help you regain those ratios.

Domingo German has done his part. Since the start of July, minus the Twins start, the Yankees starter has a 2.76 ERA and a 9.355 K/9. If it weren’t for the start at the Dodgers, he may even have moved up another tier.

It may be odd to see Wade Miley on here if you haven’t been paying attention. However, while he’s not your guy if you’re chasing Ks, Wade has been providing solid ratio help all season to the tune of a 3.11 ERA and 1.18 WHIP.

Another low K, ratio booster guy in Ivan Nova may be the take out order for the week. Over his last 5 starts, Nova has thrown 37 innings and given up only 2 earned runs over that time. Those numbers give him a 0.49 ERA over that time, but the underlying numbers don’t necessarily back up his performance.

Over those 5 starts, Nova has a 3.73 FIP and a 91% LOB, so, there may be some regression coming, but to be fair, Nova has consistently outperformed his underlying numbers due to his more contact, less strikeout style of pitching.

Free Streamonator Pick of the Week: Cole Hamels. Imagine this is more of a historical player evaluation because Hamels has been rocked in 2 straight outings.

So, You’re Saying There’s a Chance

Something has happened with Edwin Jackson since he returned in July. In his 3 starts over that period, he’s gone only 14.1 innings, but has only allowed 3 earned runs. Of course, that 1.88 ERA comes with a 5.68 FIP, but rate stats should also be taken with a grain of salt in such small sample sizes.

One thing that has happened with EJax is that his velocity received a bump in July and is up to a 94.76 mph average from his mid 93 mph avg earlier in the season. He hasn’t shown this kind of velocity since 2015, so, maybe there’s a chance.

Would you start Gallen over one start Wheeler (vs Atl)?

Didn’t have confirmation it was Palumbo making the 2 starts when I put the list together, but he’d fit in the “There’s a Chance” grouping.

Thoughts on 2 start Joe Palumbo against Angels and White Sox?

Didn’t have confirmation it was Palumbo making the 2 starts when I put the list together, but he’d fit in the “There’s a Chance” grouping.

B_Don
Reply to  Godfather of Assy

It refers to Matt Lauer’s “privacy button” aka rape button that he had in his office before he was fired. Locks the door with the push of the button… I’ll let you take it from there.

In a locked, weekly h2h, would you start either/both these ‘serviceable’ two-starters over any of the one-starters below:

Now that I’ve actually typed it out, I think I’ve gotta stick with the one-starters.

Sometimes you just need to say it or type it out and the answer is there for ya. I’d like to get Gallen in there, but I think I’d go w/ those 1 start options you have instead.

I made a mistake; sonny gray is going against San Diego, not Miami.
It’d be nice to see McKay pitch to his potential against Seattle and Baltimore, but gallen’s the one getting the results so far.
12 hours of flip flopping to go