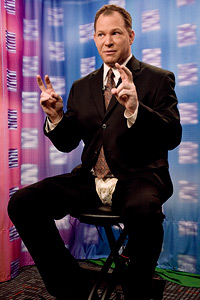 Our interview subject is Matthew Berry –  the Director of Fantasy Sports at ESPN.  His career has taken him from stand-up comedy to Hollywood where he paid his dues with writing gigs like Crocodile Dundee in Los Angeles which was up for a 2001 Razzie (unaffiliated to Razzball) as Worst Remake or Sequel but lost to Planet of the Apes.  He followed his passion of fantasy baseball and wrote for Rotoworld before starting his own fantasy blog TalentedMrRoto.com that was purchased by ESPN in 2007.

Last note – unlike our interviews to date (see Spike Lee, Sarah Palin, and Rickey Henderson), this interview was real.  ESPN is pimping their Fantasy Baseball folks on a PR junket and asked us to conduct this interview….the site that brought you Hater Bell….. When we asked Matthew Berry towards the end of the interview why us?  He seemed as puzzled as anyone….go figure.

GREY: First off, thanks for A’ing our Q’s, mucho appreciado Senor Fruitazi.  You’re a good sport since a lot of the time, like a blogger Luke Skywalker would say, You Are My Fodder.  I started Razzball when I was laid off during the WGA strike and I know you’re also a screenwriter or were or whatever, so I just want to say thanks for paving the way for me to go from an underappreciated, society misfit to an underpaid, society misfit.  You’re the wind beneath my wings!

Okay, brownnosing aside, I know how hard it is to do fantasy baseball rankings.  You really can’t please everybody all the time.  With that said, WHAT WERE YOU THINKING, MAN?!  I put Dustin Pedroia, Josh Hamilton and Cliff Lee in our 2009 Fantasy overrated category.   But your rankings have a vibe of “What was good last year is a tasty nugget to covet this year.”  Defend these three or quit your post at ESPN and move to Cape Horn.

MATTHEW BERRY: Cliff Lee developed a new pitch last year so I don’t think he’s necessarily in for a regression to ‘before last year.’  Hamilton stayed healthy and…he’s in Texas.  This makes Hamilton valuable.  Pedroia’s my biggest question mark.  Is his power for real?  If it is, then he could be very valuable.

GREY: When anyone mentions closers on Razzball, I point them to our Fantasy Baseball Glossary entry for SAGNOF — Saves Ain’t Got No Face.  Double negative aside, you know you want to agree with me.  So… Go ahead.

MATTHEW BERRY: I’ve said forever that you don’t pay for saves.  So… Um… Yes, I agree with that.  There’s very few closers out that I think are rock solid this year.  I count 8 coming into the season where you’re like, “Okay, that’s clearly the guy” and there’s no risk.  And that was before questions about Brad Lidge showed up.  So I think you’re down to seven.

MATTHEW BERRY: Most excited about Miguel Cabrera. He’s do for a monster, monster year.  Most people look at last year as a disappointment, but he actually had a huge 2nd half.  Once he adjusted to the new position and to the new league.  He’s still going towards the end of the 1st round, but I think he’s a guy you can look up at the end of the year and be the number one fantasy player overall.

MATTHEW BERRY: Certainly top three.   So that’s the guy I’m most excited about and least excited about A-Rod.  There’s so many variables.  He’s so crazy.  I believe we have not heard the end of the A-Rod story.  This is based on nothing more than my gut.  I don’t want anyone thinking I have insider information from ESPN.  This is based on nothing more than my gut.  I think there’s more to the story.  I think it’s going to come out that he used more than what he’s said.  I think the story is going to continue throughout the summer.  I think if the Yankees don’t have an amazing year he’s going to be left holding the bag.  I mean… I just don’t like him.  I’ve been very open about that.

GREY: A fantasy baseballer’s (<– my Mom’s term) job is to unearth late round bargains.  Who is this year’s Ryan Ludwick?  Tell my readers now.  They thank you.

GREY: I like him too. Our 20 risky pitcher for 2009 post points out a few candidates to avoid at your draft.  You probably disagree with Ricky Nolasco’s inclusion there like I disagree with MILF’s nickname on VH-1’s I Love Money 2.  Go ahead, make a case for Nolasco.

GREY: You are admirably outspoken on your fantasy strategies – e.g., don’t pay for saves, draft speed…  Do you get a lot of hate mail–

MATTHEW BERRY: (jumps in) It’s more than just that.  Those are just two of them.

GREY: Okay, those are two.  Do you get a lot of hate mail from people bemoaning their crappy closers and their Carl Crawford-led offense?

MATTHEW BERRY: I would say my hate mail is pretty evenly spread out among all subjects.

MATTHEW BERRY: I find this hard to believe already.  But go ahead…

GREY: What, no rapport?  Is it my breath?  Should I return to the brownnosing?

MATTHEW BERRY: It’s quite all right.  Just go ahead.

GREY: Okay, so I’m about to join a random ESPN league.  Given that your core strategies are read by many of the participants on the site, would you suggest I follow your strategy or move closer to the opposite since there will be more bargains (i.e., top closers go later)?

MATTHEW BERRY: Well, I appreciate, as my pretend close friend, that everyone is going along with my strategy.  I don’t think that’s the case.   Fantasy sports more than anything else is a place where everyone thinks they know more than everyone else.  That’s one of the points of it.  You want to prove you know more than everyone else.  So I think my strategies work, I think every league is different, obviously every rule is different, every fantasy player has different tendencies. My recommendation would be, in a vacuum, that you don’t abandon a strategy just because everyone else is doing it.

With that said, there’s definitely something to zigging where everyone else is zagging.  Where I wouldn’t pay for closers maybe I would go for starting pitching more, because I tend to say wait on starting pitching.  I might try to lock up a scarce position like I might draft three 2nd basemen.  Give myself depth somewhere to trade if there was suddenly a run on something.  As opposed to chasing a lower end guy at one position.  Suddenly, a bunch of 3rd basemen are going off the board, so instead of going early on a so-so third baseman just to have someone, I might load up on another position.  “Okay, I’m going to make sure I have a bunch of good 2nd basemen and trade them.”

GREY: The amount of league data you have at ESPN must be staggering.  Have you given thought to summarizing this data and publishing it?  For example, what players were on the highest percentage of teams that lost?  Do teams that have invest in say a 2B/SS combination in the first two rounds or pick a starter in the 1st round fare better/average/worse than the average team?  That type of information would really add some credence.

[Rudy’s Editor Note:  C’mon Worldwide Leader!  You have a treasure trove of data to actually validate (or invalidate) fantasy baseball theories.  Allow us at the data and we’ll reduce our ESPN-razzing by 40%!]

GREY: If Baseball Tonight anchors and alumni participated in a fantasy baseball league, who do you think would win?  Who will finish 2nd to last in front of Eric Young?

MATTHEW BERRY: Steve Phillips would win.  Steve Phillips plays fantasy.  He knows it really well.  In fact, Steve Phillips won an internal Baseball Tonight league last year against a bunch of researchers and producers and people that really play.  So Steve Phillips is the guy who I think would win. The guy that I think would lose is…um… The guy I would say would lose…. Um… The guy who would finish last is Kruk. (He’s) been very open about his disdain.  He’s never played fantasy so like anything I think it takes a learning curve.  John Kruk has publicly said that if he played he wouldn’t do a lot of the moves.  So I could see him getting bored with it.

GREY: Has anyone mentioned to you that your on-screen presence is reminiscent of Crazy Eddie – the 80’s electronics store where the prices were innnnnnnnsane?  Note, you do publish manifestos, a crazy man’s journal…

GREY: Ever thought of being known as Wild Berry?

MATTHEW BERRY: No, I have not.  I try to avoid obvious puns on my own last name.

GREY: Your lack of canoodle time with the ladies is worldwide leader renown.  Can anyone have a meaningful relationship and be good in fantasy sports?

MATTHEW BERRY: It’s good fodder.  Although it’s changing recently… Since being at ESPN, it hasn’t been a priority.  I date women that are wrong for me.  And I’m probably wrong for women that date me.  I don’t blame any of it on fantasy sports.  Nate, who I do the podcast with, he’s very happily married.

MATTHEW BERRY: No. I have no problem with the phrase itself, but I’m not sure I agree with it.