Our interview subject is the well-respected director of such films as Do The Right Thing, Malcolm X, He Got Game, and Bamboozled as well as a well-known devotee of New York sports.

Rudy: Thank you for accepting our interview request, Spike.

Spike: My pleasure. You know I love talking ‘ball. Knicks 2009! It’s our year. We get a ball handler with our first round… 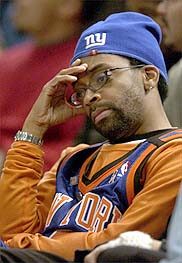 Spike: What?! (uncomfortably long pause) You’re lucky you’ve got a black man as your avatar.

Rudy: Sorry for the confusion. So we know you’re a Knick fan – what baseball team do you root for?

Rudy: Any non-fictional teams that have played a game within the last 40 years? C’mon, you must be either a Yankee or Met fan?

Spike: I root for all New York teams but I just stopped rooting for the Mets after what they did to my boy Slick Willie. If I had to pick a favorite Major League team other than the Yankees, I’d say the Toronto Mo’ Better Blue Jays. Show ’em how it’s done, Cito G.

Rudy: You’ve exchanged words in the press recently with Clint Eastwood on the dearth of black characters in his WWII movie Flags of our Fathers. You feel it disrespected the many African-American soldiers who fought nobly in that effort. Baseball and race have a long, intertwined history – I’m wondering if you have similar views on baseball movies.

Spike: Don’t get me started, Rudy. I’m not sure Hollywood ever got the memo that baseball is integrated.

Rudy: Isn’t that a tad offbase? Hollywood released The Jackie Robinson Story a couple years after he started playing for the Dodgers.

Spike: Yeah, and they cast Jackie Robinson to play himself. God forbid they hire an actor so two black men could prosper. At least it had Ruby Dee in it. Nobody does it like Ruby Dee.

Rudy: Let me throw out some other baseball movies and you let me know what you think of them. First one: Bull Durham.

Spike: Is there one black guy on that team? No wonder why they sucked. And I’ve been to Carolina. Trust me – a white ho’ like Susan Sarandon’s character Annie wouldn’t be deciding between Kevin Costner and Tim Robbins. That’s like choosing between vanilla and butter pecan. Real life, Annie has a mad case of Jungle Fever. Chocolate or chocolate chocolate chip.

Rudy: A League of Their Own

Spike: More like a A League Keepin’ To Its Own. Where are all the sistas? I’ll tell you where they were. They were all in the trenches. They were stormin’ Omaha Bee-yotch. Don’t believe Spielberg’s jive – no Tom Hanks-lookin’ guy saved Matt Damon. It was a sista.

Spike: Why you gotta call them the Black Sox? Ain’t no black men on that team. THAT’S the scandal if you ask me.

Spike: This might be a white man’s dream but it sure ain’t a black man’s. Somewhere in the midwest they build a magical field where the lilly-white Black Sox ghosts can play. A white man (Kevin Costner) then kidnaps a black man (James Earl Jones) to make him watch baseball. Then when the white ghosts leave for the cornfields aka plantation, they invite James Earl Jones but tell Kevin Costner he can’t come. What do you think happens in the cornfield – they all sing kumbaya? Take out the weepy music and that scene may as well be in Birth of a Nation.

Spike: How come it’s gotta be a black man praying to Jaboo? And what’s up with turning my boy Wesley (Snipes) into a baseball playin’ Stepin’ Fetchit? I cast Wesley in a movie and make him a proud African-American architect who’s neck deep in fine Italian punani. This movie it’s all “Yessah, I’ll do some push-ups. I shoulda never been poppinin’ up dem balls” and “Nossah, I should’nta gone and stolen all dem bases”. Makes me sick to my stomach.

Rudy: Are there any baseball movies you do like?

Spike: Besides The Bingo Long Traveling All-Stars & Motor Kings and The Jackie Robinson Story, nope. Well, I kind of dig The Bad News Bears. Let them play! Let them play!

Rudy: You’ve done a basketball movie (He Got Game). Any thought of doing a baseball movie?

Spike: Funny you should ask. I’m working on a biopic right now of Reggie Jackson called “JaXon”. Denzel is getting fitted for over-sized glasses as we speak.

Rudy: Can’t wait for it to hit theaters. We love Reggie over here at Razzball. Last question: Do you play in any fantasy baseball leagues?

Spike: Nah. Stopped playing years ago. Too hard to find players I like beyond outfielders and power-hitting 1st basemen.

Rudy: Spike, thank you for your time. it’s been a pleasure.