For a seemingly decent leadoff hitter, Angel Pagan gets very little press.  Fantasypros.com has him ranked 246th overall, ESPN has him as the 156th best hitter.  Both rankings have him placed near players like David Freese, Chris Carter, Adam LaRoche, and Alcides Escobar.

Outside of his injuries, Pagan has been exactly what a leadoff hitter should be: getting on base often and have the potential to steal.  In 2012, his last full season, he ranked 66th in OBP among qualified hitters.  That is above players like Jason Heyward, Ian Desmond, Jason Kipnis, and Adam Jones.  If his 2013 numbers were extrapolated to a full season, he would have ranked 73rd.

Here is a quick look at Pagan’s standardized stats over the past 5 years.  I standardized his counting stats based on the number of PA he made during that season:

This might look like a mess of numbers, but it is very telling.  His average has never dipped below .262, and that occurred when he recorded the second lowest BABIP of his career, over .030 below his career BABIP.  He has also consistently scored runs, doing so once every 6-8 PA, or about every other game.  On top of this, his walk rate has been increasing while his strikeout rate has been decreasing.

As everyone knows, steals don’t age well.  At 32, Pagan has still managed to keep his legs around.  Hopefully his injuries haven’t hampered his abilities.  Here is a graph of the average SB per player by age: 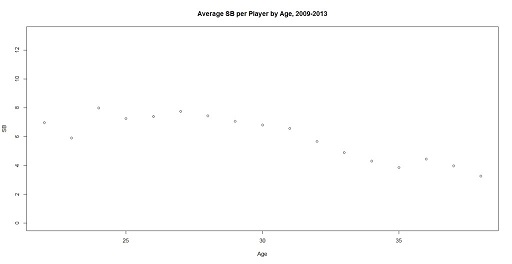 This makes it pretty clear that stolen bases don’t age well.  But this graph accounts for all players, fast and otherwise.  This histogram only shows seasons where a player stole at least 15 bases: 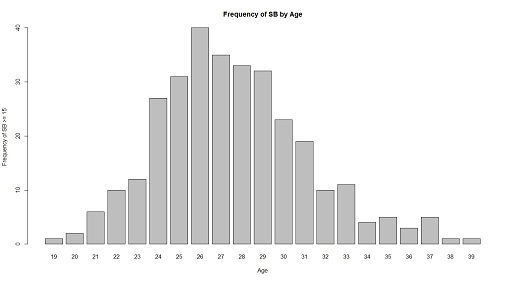 While this doesn’t exactly paint fast players in a good light in terms of aging, it does show that Pagan isn’t totally over the hill.  In the past 5 years, there have been 40 players who have stolen at least 15 bases in a season.  Over half of those were in the 32/33 age range.  There is still a good chance Pagan will steal 15 bags.

Over the past 2 years, Pagan has played on a similar level as another leadoff hitter ranked much higher than himself, Desmond Jennings.  Jennings is ranked around the top 100 overall, and ESPN has him listed as the 66th best hitter for 2014.  Here is a comparison of both players last 2 years:

In 45 fewer games, and 200 fewer PA, Pagan is only four hits shy of Jennings.  While Pagan won’t give you the home runs Jennings will, he won’t leave the category completely barren.  Pagan hits for a much better average than Jennings, and maintains a slightly higher OBP too.  Surprisingly, Pagan has a higher slugging percentage than Jennings.  This means that Pagan must not be hitting only singles to get on base, he is supplementing his SLG with doubles and triples.

Pagan is definitely an undervalued player.  He has potential to contribute in 3 categories, while not totally killing you in the other 2.  Of course age is a factor, but Pagan is by no means ancient.  He will be 32 to start the season, which is not over the hump.  His SB numbers might decline, but I see no reason why he won’t hit for average and score a bunch of runs in front of Buster Posey, Pablo Sandoval, Brandon Belt, and “Crazy Eyes” (Hunter Pence).  Of course, all of this depends on whether or not he can stay healthy.  Either way, he is a late round pick, so there is little risk involved, with a good amount of upside.  I’ll give him an 81/8/52/.280/19 line, assuming he plays 145 games.