It saddens me to say this, but we’re down to the final few weeks of the fantasy baseball season. Almost everyone is in full-on fantasy football mode, but I’ve always preferred fantasy baseball. The grind and skill it takes to play roto baseball are much more intriguing than all of the coin flips in fantasy football, and it pains me to see the season winding to an end. With that said, this is the most important time for streamers because we’re in our fantasy playoffs! Without further ado, let’s start with the pitchers!

Smyly used to be one of my favorite southpaws to stack against in DFS, but something has changed with the journeyman. The left-hander has a 3.48 ERA and 1.19 WHIP for the year but is amid the best stretch of his career right now. In fact, Smyly has allowed two runs or fewer in seven of his last eight starts, sporting a 2.23 ERA and 0.99 WHIP in that span.

That even includes one seven-run drubbing against a sensation St. Louis lineup, but he’s not going to have any issues with these two offenses. Miami ranks 27th in runs scored, OBP, OPS, and xwOBA, while Pittsburgh ranks bottom-three in runs scored, OBP, OPS, wOBA, and K rate. Both of those ballparks play as pitcher-friendly parks as well, and it wouldn’t be surprising to see Smyly swing two quality starts. There is a chance Smyly makes just one start with the wacky things Chicago is doing with their rotation, but he’d still be a good option in either of those matchups.

This Orioles rotation has been underrated all season, and Wells is one of those guys. The young righty has a 3.93 ERA and 1.10 WHIP this season. That ERA is nothing special, but a 1.10 WHIP is pretty amazing in that daunted division. One thing that we really love about Wells is his wonderful floor, allowing three runs or fewer in 19 of his 22 starts. He also hasn’t allowed more than five in any outing, and it’s very unlikely that this guy will blow up your ERA and WHIP. It’s even more unlikely in a matchup with the Tigers, ranked 29th or 30th in runs scored, OBP, OPS, xwOBA, and wOBA. The Streamonator agrees, projecting Wells to provide $13.8 worth of value.

Trevor Rogers, MIA (vs. WAS)

Rogers was drafted in every season-long league but dropped after a nightmarish first half. It was actually impossible to hold this guy because he had a 5.85 ERA and 1.60 WHIP before hitting the IL. That trip to the injured list did Rogers some good, though, tallying a 2.95 ERA, 0.93 WHIP, and 10.8 K/9 rate in his three starts since. That’s the stud we saw last season, with the southpaw producing a 2.64 ERA and 1.15 WHIP in what appeared to be a breakout season.

We’re willing to ride that recent form because he gets a home matchup with Washington. The Nats rank 25th in runs scored and have been freefalling since trading Juan Soto and Josh Bell from the heart of their lineup. It’s one of the few teams Rogers has rolled too, allowing three runs or fewer in all seven of their matchup since the start of last season. This is one of The Streamonator’s favorite plays, forecasting Rogers to provide $15 worth of value.

UPDATE: Rogers did leave his Saturday start with an injury and is uncertain here.

It’s been a long season for the Buccs, but they have something special with this kid. A 3.24 ERA and 1.27 WHIP is a good start, but a seven-run dud is the one thing holding those averages back. He’s actually got a 2.53 ERA and 1.21 WHIP if you take out that stinker, allowing just three combined runs across his last four starts. That’s the ace we saw in the minors, with Contreras compiling a 2.97 ERA, 1.05 WHIP, and 9.6 K/9 rate in 58 starts in the system. It’s hard to differentiate this Chicago team from a Triple-A club, with Roansy throwing five one-run innings in their one matchup earlier in the season. The Streamonator loves him too, projecting Contreras to collect $21.7 worth of value.

Sampson has the same schedule as Smyly, and he could be one of the best streamers with those dream matchups. He’s also been better than most would expect, establishing a 3.48 ERA and 1.27 WHIP.

Anybody pitching for the Dodgers is a good option. They churn out arms better than any organization, and Grove will likely enter this matchup as a -200 favorite or higher.

Keller was one of the top prospects in the Pittsburgh organization, and he’s showing glimpses of that recently. He’s allowed three runs or fewer in 11 of his last 12 starts, totaling a 2.51 ERA and 1.23 WHIP in that span.

Any hitter getting four games in Coors Field is in play. Not only is that ballpark surrendering runs at a ridiculous rate, but that team possesses one of the worst pitching staffs in baseball. That’s bad news against Joc Jams, with the lefty masher maintaining a .345 AVG, .446 OBP, .655 SLG, and 1.101 OPS across his last 21 games. He’s done almost all of that damage against right-handed pitching, providing a .354 OBP, .536 SLG, and .890 OPS against them this year. That’s brilliant because he faces at leasr five righties in this seven-game week, squaring off with two of the worst pitching staffs in baseball. Colorado ranks 30th in ERA and 29th in WHIP, while Arizona sits 22nd in ERA. 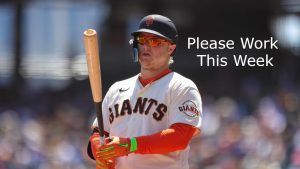 I might be crazy for this recommendation, but two home runs and six RBI are not out of the realm of possibility for Gallo this week. That’s all you could hope for from one of your streamers, and there’s no better power bat who’s this widely available. It’s obviously been a rough season for the former Ranger, but he’s still got 17 bombs and has been playing every day for the Dodgers.

That always makes him a decent bet for an RBI because he bats behind the best Top-6 in the sport. Getting to hit every day is massive in an eight-game week because Gallo could get 25-30 at-bats. We’re talking about a masher with a .271 career ISO, collecting 175 homers across 2,328 at-bats. That’s one of the best rates in MLB, and we certainly don’t mind that he’s expected to face six righties in these eight games.

The Rockies are one of the worst teams in baseball, but their offense is tough to avoid when at home. To put it simply, Colorado is projected to score 5-6 runs in every game at Coors because everyone does that in that friendly ballpark. The hitter-friendly environment always plays tricks on these hitters in terms of season-long statistics, but it makes them excellent streamers when they get seven home games in one week. Grichuk is the best option of the bunch, tallying a .306 AVG, .487 SLG, and .837 OPS across his last 53 games. He’s also got a 1.029 OPS at home in that span, proving how valuable that park can be. The icing on the cake is his promotion in the lineup, moving to the leadoff spot in this highly-projected squad.

Santana used to be an All-Star in his days with Cleveland, but he’s nearing the end of his career. In any case, Seattle took a shot on this guy, and he’s starting to bring back some of that elite form. The switch-hitting first baseman has homered five times over his last six games, generating a .333 OBP, .955 SLG, and 1.288 OPS in that span. It’s obviously a small sample size, but it’s encouraging to see this former All-Star get hot and bat cleanup for this underrated Mariners lineup. His biggest asset here is the matchups, facing Kris Bubic, Zack Greinke, JP Sears, James Kaprielian, Adrian Martinez, Reid Detmers, and Brady Singer this week. Those final two are the only formidable arms, but they’re certainly not pitchers we need to avoid in a superb seven-game week.