Welcome back to MLB DFS, Money Monday edition. It’s me, Cousin Timmy, and I’m here to keep your Monday nice and green. We have a six-game main slate on FanDuel tonight with first pitch set for 6:40PM ET in Miami.  If you’re a Mike Trout fan or are dying to see Zack Greinke pitch 5 innings without a strikeout, you’ll have to tune-in on an empty stomach as KC @ STL and LAA @ CWS start before lunchtime on the West Coast.

We have some pretty baller pitching matchups tonight. They start with Pablo López vs. Zac Gallen in Miami, both with supporting casts that are more than willing to swing the bat.  The Fish and Snakes have an identical K rate of 25.2%, good for third highest in the majors. López is 3-0 with a 0.39 ERA and a 27.1% K rate facing arguably the worst hitting team in the majors. With other solid options today it’s still hard for me to pass on the most expensive pitcher on the slate. I will have some shares of him for sure. Let’s get into who I like elsewhere and start our trip down the green brick road. Sorry, my kid made me watch The Wizard of Oz this weekend and I had to do it. Ok, let’s go.

New to DFS?  You can start playing right now on FanDuel and put our picks to the test.  If you’re scared of feeling like a small fish in a big pond, be sure to read our content and subscribe to the DFSBot for your daily baseball plays. Just remember to sign up through us before jumping into the fray, it helps support your Razzball team!

Another great pitching matchup tonight is Max Fried vs. Chris Bassitt.  Bassitt has recorded six or more strikeouts in all his starts but his 28% K rate doesn’t aline with his career 22.3%. I think he’ll have a hard time today vs. Atlanta who has a 35% Hard Contact rate, best in the Majors. So Fried is my choice here. The Mets have hit a lot of ground balls and not many fly balls which plays directly into Fried’s 56% ground ball rate. Max has not wowed us with high strikeout numbers yet, but he did have a 36% K rate vs. LA Dodgers and that ceiling is always there.

If you want to save money on pitching tonight Rasmussen is your guy. Although I like Jordan Montgomery’s price tag, his matchup with Toronto is less than ideal. I love Rasmussen as I drafted him on all six of my fantasy teams this season. I was pretty disappointed with his performance up until his last start where he shut down the red-hot Seattle Mariners on his way to a 9 strikeout performance in 6 innings. Drew gets the A’s tonight who are bottom-five in wOBA, OPS, and BA. They also lead the majors with a 26% K rate. This is the best matchup for any pitcher this season. Rasmussen isn’t going to record nine strikeouts every time out, but this matchup is too good to pass up at this price tag.

If you’re looking to punt the catcher position Mike Zunino is always a good option with his HR potential but Jeffers is my guy tonight. I like the Twins stack vs the Tyler Wells who has a high 41.5% fly ball rate low K% of only 17%.  A good cheap piece to your Twins stacks that has as good as a chance to hit a dinger as anyone else on the team today (except Buxton, who is just elite).

Anytime the Astros face a lefty I stack them and start with Yuli. His price has come up $400 since you saw his name on this list last week but it’s warranted. His .253 wOBA in 2022 does not reflect his career .348 wOBA vs LHP. Sure, he’s a year older but Jose Altuve is expected back in the lineup tonight and Yuli should regress to the mean sooner than later.  Marco Gonzales isn’t the guy to stop that from happening.

I don’t think France needs an introduction here as the Razzball team has been all over him this past week. What you do need to know is that he’s now the highest priced 2B on the slate and has almost reached Vladimir Guerrero Jr. pricing! Is he going to stay there all season? Maybe, maybe not, but tonight’s he’s worth the price of admission vs. Jake Odorizzi. Jakey boy has not thrown more than 83 pitches in any of his four starts and was tagged for 8 H, 3BB, and 4 ER vs. this same Seattle team just two weeks ago.  Seattle has the potential to score a lot of runs tonight and France will be at the epicenter.

Diaz is not an everyday player but is usually in the lineup vs LHP, which we have tonight with Marco Gonzales. Diaz is a value play if we are stacking the Astros, which we are. Since Altuve is expected back we’ll likely see Diaz batting 7th tonight but we’ll see what the lineup card says when it comes out. The Astros have the highest implied run total on the slate at 4.43. Let’s save some money here.

I like the Yankees tonight vs. Ross Stripling just as I liked the Red Sox against Stripling in his last start. Bregman and LeMahieu are in play as well, but Donaldson is the guy I like the most. Over the past two weeks, he has a .415 wOBA and a 177 wRC+. He has 9 BB in his last 7 games and should cross home plate at least once tonight.

This is where our savings will come into play. Buxton who is the third highest-priced OF on the slate could be the highest scoring one. We’ve seen him hit multiple homers in a game already and he could do it again tonight. Yeah, yeah, they moved the fences back in Baltimore, so what? Bux has a 43% hard contact rate and 7 HR in just 58 plate appearances. The Twins stack today might get overlooked with the Yankees on the slate so let’s take advantage of Buxton vs. a bad pitcher.

Man, as much as I support the “Yankees Suck”  mantra, (sorry I’m a Boston guy that grew up in the Pedro/Jeter/A-Rod era) they are primed to score a lot of runs tonight. Judge leads the majors with a 30.4% Barrel rate and is second with a 95.8 MPH Exit Velo. He’s the priciest bat on this short slate and likely the highest owned, but if he smashes another dinger we don’t want to be left out. 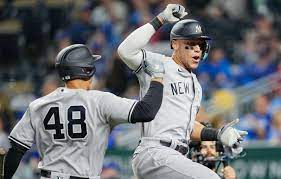 Three of the six games tonight are in domes and we should not have any issues with rain tonight.

Good luck tonight and feel free to hit me up @TimmySperos on Twitter with any questions!