Reynaldo Lopez allowed the fifth-most home runs last season and had game logs that would have made NBA players jealous. There were four games allowing three homers in a game and one game serving up four. There were 14 games in which he allowed at least five earned runs, with six of those games giving up six earned runs and two games with eight! Reynald-NOOOOOOOOOO. But I’m intrigued for some weird reason. Is it the 296 ADP in NFBC drafts from 2/1 to 3/9? Could be. Maybe it’s the fact that he throws mid-to-upper 90s. I’m always a sucker for speed. I blame Maverick and Goose. Or could it be the six-inning, 14-strikeout performance in April of last season? How about the complete game, one-hit, 11-strikeout game against the Cleveland Indians in early September? Let’s dig in and see if we can say Lope-YESSSSSS.

Here are a few reasons why Lopez could improve:

Lopez made a concerted effort to improve both physically and mentally over the summer. Instead of going back to the Dominican Republic, Lopez worked out at the Mamba Academy with Noah Syndergaard and Lucas Giolito. “Every time one of us threw a bullpen session, the other two were there. We all shared information. I also learned about the pitches (and different grips).”

He also used the Headspace app for meditation, in order simplify the thought process and learn how to slow things down on the mound. Woo sah worked for the Bad Boys. Why not for Lopez?

Finally, the White Sox made a splash in the offseason by signing Yasmani Grandal to a four-year, $73 million contract. Why is this important? Because Grandal is known as one of the best pitch framers in the game. In 2018, Omar Narvaez, Kevan Smith, and Wellington Castillo were the catchers for the White Sox. Smith was ranked 32nd in Framing Runs (Baseball Prospectus), Castillo was 104th, while Narvaez was 113th. Grandal was 1st. Small sample size you say? Fine, let’s do 2019. The White Sox catchers that year were James McCann and Welington Castillo. McCann was 104th while Castillo was 112th. Grandal? Only 2nd.

Statcast has a catcher framing leaderboard. Last season, Grandal was 3rd in all of baseball with a 51.1% strike rate. Translation: he’s damn good at getting strikes for his pitchers.

Now, let’s look at the zones where Lopez pitched the most. 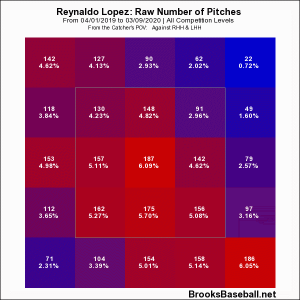 Uhh, throwing in the center of the plate the highest percentage is sub-optimal. No wonder Lopez got pounded last season. The left, down, and lower right zones were the areas where Lopez attacked batters the most.

On the zone to the left, Grandal was a pedestrian 60th in strike rate, but to the right, he was 7th. The lower right zone, Grandal was 11th, while the lower portion of the strike zone, he was 9th.

Framing is not the only thing Grandal brings to the table, though. He knows how to call a game and could be calming influence for Lopez. He’s already suggested that Lopez put a new wrinkle on his slider, allowing it to travel at different speeds. The results after the most recent Spring Training outing were favorable, as he struck out five and did not issue a walk in 4 1/3 scoreless innings against the Padres.

Is Lopez going to be an ace? Probably not, but at his cost he doesn’t need to be. He’s shown that he can have dominant outings from time to time, but it’s all about managing the potential blowups. If he can do that, then he should return tons of value. Steamer has him projected for 159 innings. I get it, as projection systems average out the past three years, but Lopez pitched 184 and 188 innings the past two seasons. Maybe they are thinking that Michael Kopech will take his spot. Regardless, if Lopez does perform well, he should be closer to 190 innings than 160. If all the changes don’t manifest into pleasant results, you cut him and move on. No harm, no foul at his draft price. 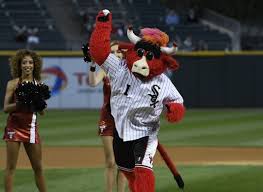