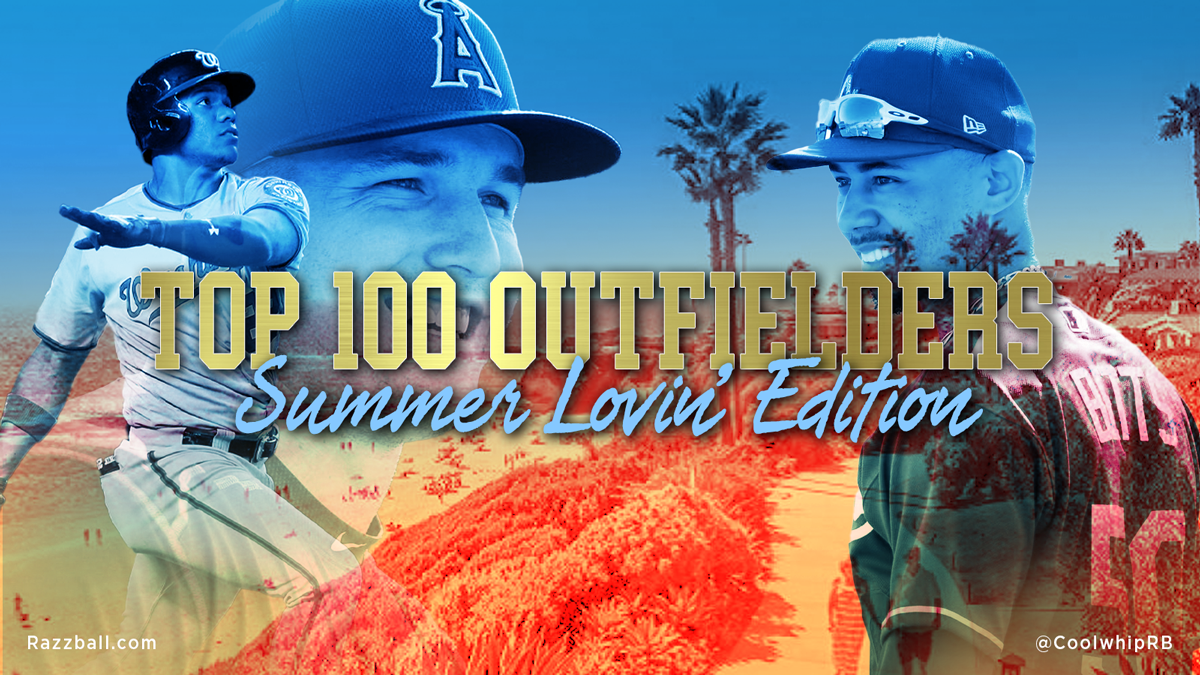 Ah, the sweet sounds of summer. Managers chirping. The pop of the bats as they wake from their early spring hibernation. Hitters all going down with soft tissue injuries. Pitchers breaking down with overuse injuries. And of course, Rob Manfred trying to fix something nobody wanted fixed while ignoring the plight of minor leaguers sleeping in their Geo Metros.

Everything just as I remember it from 2019.

As we approach the summer months we’ll undoubtedly start to see some players break out of their early-season funk. Players finding their rhythm, returning from injury, and hitting flyballs into the hot summer air. We will also begin to see who is for real and who is pretending. To start off our hot bat summer, here are a few names that I have noticed around the league.

Cedric Mullins – He can’t stop, won’t stop. Since June 1, The Entertainer is hitting .452 with 3 HRs and 4 SB. That includes a 14.2% walk rate in that span and 10% on the year, nearly doubling his previous mark over the last 2 years. He’s definitely become a better hitter, but the power stroke is a bit of a mirage. I see his AVG dropping to around .280-290 as the season goes on to fall more in line with his 38.7% Hard-hit rate.

Justin Upton – As Walter said, “If you will it, there is no dream.” Upton has been telling himself in the locker room before each game, “You ARE a leadoff hitter.” Since moving up to leadoff, JUp is slashing .310/.419/.592 with 5 HRs. Is that good? Yes.

Tommy Pham – He has 2 HRs and 5 SB since June 1. After battling some early injuries looks like he’s finally coming alive in the summer by hitting .325 and walking 20% of the time raising his season walk rate to 16.8%, which would easily set a new career-high (previously 13.4%).

Andrew McCutchen – After a slow start I said he was due as we approached summer, and here we are. Since June 1, Cutch is batting .333 with 4 HRs and 12 RBIs. The player formerly known as The Dread Pirate is back and hitting for power with .778 SLG in June.

Adolis Garcia – 16 games without a HR, and hitting .246/.266/.227 during that slump with a 3%/30% BB/K. Yuck. This is also sunk by a 58% GB rate, meaning, his splits have flipped. So we all witnessed the ceiling, and now you are seeing the floor. And if it continues much longer he’ll sentence you to the Gallos. (draining your ratios for spotty home runs.) Unfortunately with him, he also gimps your OBP. I speculated last time it might be a good time to sell high, and it looks like I might have been right. Although, summer has arrived and a bounceback is not unlikely.

Trey Mancini – He’s cooled off a lot recently, slashing .222/.340/.311 since the first of the month. He’s managed 1 HR, but has only produced a .089 ISO limiting his RBI opportunity. He could be getting tired as I feared in his first season back from cancer. He might require some rest, both mental and physical, so he can gain back his strength. Baseball is a marathon after all.

Jarred Kelenic – Sent down to AAA. Welp, Big Gulps huh? See you later. When they called up JK, I guess it was just that. A joke. Dipoto shouts from his pressbox, “I TOLD YOU HE WASN’T READY!” He struggled to get hits but his speed was on display. Hopefully, he can figure out his approach and come back soon.

Jake Fraley – Over the last 2 weeks since starting games he’s hitting .311/.475/.600 with 4 HRs and 15 RBIs, and 3 SB. Someone has been busy? Looking at his minor numbers, his BABIP is slightly high and he’s shockingly on pace with his minor power track record despite his scouting report only giving him a 45 for power. The 28% walk rate however will not stick just like the 33% HR/FB. I see more of an 18% from him, so enjoy the hot streak while it lasts. Digging a little deeper, his power is to his pull side, and all his home runs have come off of RHP. He might be sitting some vs lefties, but if there’s a RHP on the mound I wouldn’t hesitate to start him as his playing time right now is clear with Lewis on the IL and the aforementioned Jarred Kelenic sent down to the minors. 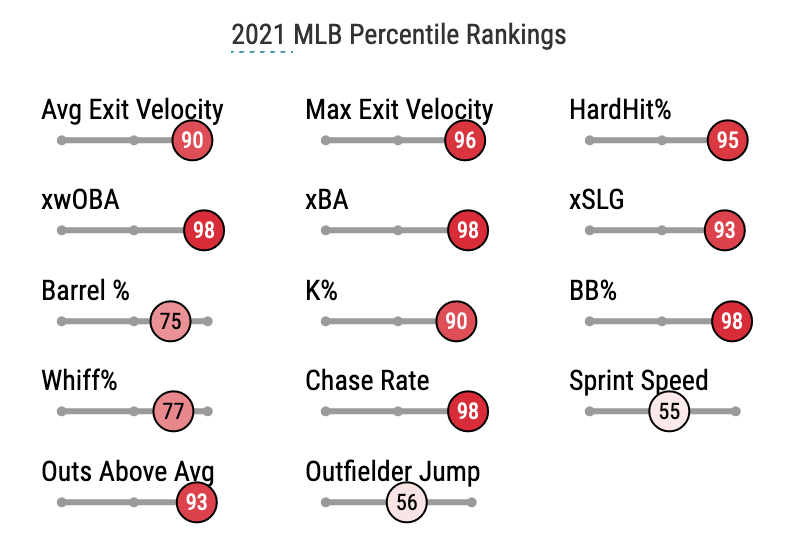 Is that good? I’ve been told that’s good. I’m fairly certain that having more red than a Ferarri merch shop is good. His current AVG is .266 but his xBA is .309, oh baby. His current SLG is .426 but his xSLG .566, oh baby. And if that’s not enough for you his HardHit% is currently 54.3% (on pace for career-high) and a maxEV of 115.3 mph (also a career-high). All signs point to things turning around for him in the summer. The one hiccup is that his barrel rate is a tad lower, though it is hardly a concern when everything else points to a strong regression towards the previous Dr. Pepper mean.

Next week we take a deep dive into what Taijuan Walker has been doing.

Yeah, i was just saying last night that he is having the worst time staying on the field right now. And that concerns me. When he has been on the field he hasn’t really taken off either, but he gets a small pass due to not having many ABs before he’s injured again.

So, if you have a gut feeling he gets right, then maybe, otherwise I’d probably avoid this year because it feels like he pissed off a witch doctor or something. Mancini already seems to be shaking off the drought since I wrote about him with back-to-back multi-hit games.

What’s up man? Does Ozuna play again this year?

Man its tough to say, I bumped him way down the list because of the injury and his personal problems. Seems he needs to spend some time doing something other than baseball.

Which side would you prefer?:

thats tough for me, because i love both Darvish and Haniger. But in a vacuum take the better bat, Judge. Also depends which stats you need most.

How can Rosario still be so high?

Track record #1, and he’s been rather productive so far for lacking HRs. he’s got 7 steals and 38 RBIs.

Thanks for the write-up CW. Just wondering for keeper purposes, but where would you rank Eloy Jimenez and Luis Robert on your pre-season Top Outfielders for 2022 list?

Likely the same place i had them this preseason. Eloy top 10 and LuRob not far behind, top 15

C: s. Perez
1b: abreau
2b:semien
3b:ramirez,
Ss. T.anderson
Of: m.betts, b. harper, j.winker, A.meadows, benintendi
Utility: n.cruz, turner
Bench: v brujan, ke’hayes
ANY RECOMMENDATIONS IF I SHOULD drop BRUJAN? DO I NEED HIM WITH MY PLAYERS/ when would I play him.
5 MAN KEEPER LEAGUE.
Who would you consider as keepers?
Any help would be awesome 1st year doing fantasy

Coolwhip
Author
Reply to  Jorda b.

Well, Brujan isn’t even called up yet, so he’s not playing. Right now he’s just a stash in hopes that he would get the call, which might not be until after the break.

It’s a bit early to decide on your keepers as there is a lot of season left. But at this point i’d say you could go with Betts, JoRam, Anderson, Harper… which turner is that? Trea or Justin? if Trea then he’s your 5th, if Justin then maybe Abreu or Hayes depending on how the season goes.

Good stuff! I was offered Bogaerts/Winker for my Cole/Kirilloff/Jazz. Jazz is my only SS, and kirilloff is my last OF awhile trout is out. What side would you take in that?

Hmmm… I think I’d take that deal, Bogaerts is a nice upgrade to SS and I’m believer in Winker. Your pitching looks really good so you can certainly handle the hit there. Go for it.

Thanks for the feedback! That’s how I was leaning, and Cole looks a little less elite lately with the rules on sticky substances. Wondering if this is the last chance to move him before he takes a hit.

Hey Whip, any major concerns on Judge’s health? Obviously he’s an annual risk. I’m considering a big trade with him at the center but worried that any day he’s due for 20-30 games missed and I traded away all my juicy keepers for a guy who’ll be on and off the IL.

Judge is always an injury risk until he proves he’s not. ha. Remember when Nelly was labeled as an injury risk? Now he’s in his 40s and a lock. time does funny things.

My guy JKJ was/is a big believer in him this year because he spent a lot of the offseason doing yoga and still does I think so that could be helping him become more limber and avoid some injury probabilities with the bend not break approach.

So far it seems to be working. I guess it depends how much faith you put in his guru.

I traded Ed-Rod for Ace Fraley….I think I made a good decision 18 team 5×5 roto dynasty league! Thoughts thank you love your stuff!

Hmmm, i can see that going both ways as there’s a lot of baseball left. Fraley might lose some time to Kelenic when he’s called back up, but at least right now it could be profitable.

Didn’t Andujar or Sanchez (Jesus) on your list. How far off? Or oversight?

Sanchez is still a ways out. I was a bit bullish on Kelenic and that didn’t go so well, so I’m not going to be too presumptuous on Sanchez until I see more how he handles MLB pitching.

Why the low ranking of O’Neill? Any red flags beyond his BB/K rate? Dude has been mashing.

Yes the 4%/35% BB/K bothers me along with his ridiculously high HR/FB rate. Is it possible he keeps it going? yes. But I expect some regression coming. That all said, I still like him and if you have him i’d keep running with him.

Obp Slg league: Adolis is my bench bat….would you drop him for Upton, Joc or McCormick or Bobby Bradley ?

My OF is LF: Arozarena CF: S Marte RF: Merrifield and I’ve got Swanson at Util

I wouldnt drop Adolis just yet, I might try to wait out of the cold spell on the bench or look for trade options.