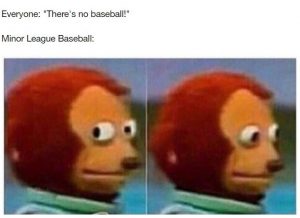 Yup, so we’re just chugging right along here in minor league land. There were/are plenty of games yesterday, today, and tomorrow for those of you who can’t go a day without baseball. While we were all watching Albombso win the Derby Monday night, Atlanta Braves first base prospect Bryce Ball made his own statement with a pair of homers in the Appy league. That’s seven on the year in seventeen games, hitting .373 with eleven walks to nine strikeouts. That’s the real good stuff from a lefty bat who was drafted in the – let me check my notes here – yup, drafted in the 24th round last month. 727th overall if you’re keeping score. Bryce is a big boy and obviously old for Rookie ball at 21, but here’s a fine example of why prospects are cool, this is all guesswork, and if you talk about prospects in absolutes you usually end up looking like a complete idiot. So hedge your bets. Keep your arms healthy, your mind open, and drink a cold Coor’s Light while you watch a full slate of MiLB games today. Here’s what else is happening around the minor leagues…

Brendan McKay, LHP | TBR – Optioned to Triple-A. Did you just shart yourself? No need. I’d bet on him coming right back up after the break. At least that’s what Kevin Cash said, and he knows better than me. I’m typing in white gloves, a skirt, and a tinfoil hat while he’s managing a real baseball team.

Alex Kirilloff, OF | MIN – 3-for-4 with a triple and a five-game hit streak. Some knucklehead came around Sunday demanding my buddy Rowf come back and take my job. It was kinda rude, but then Harley Earl came by and was like, “hold my beer fam”. Honestly, some of Sunday’s comments made me want to get back in the car with my two-year-old and drive the eleven hours back to South Carolina. She’d at least whine less. Oh yeah…Kirilloff. Rowf and I had him ranked 10th and 14th overall coming into the season, respectively. Kirilloff struggled early, but he’s picking it up, hitting .346 since the end of May. Hopefully you stayed patient with him because he’s one of the best outfield prospects in the game. By the way, I met a nice bloke in South Carolina named Hokey. Every time we did a shot, he did the Hokey-Pokey. No joke, and his wife had recently died of cancer. Be like Hokey…enjoy life and don’t waste time with hate, fear, or regret. Or just don’t be an asshat in the comments…either way.

Kyle Lewis, OF | SEA – 2-for-4 with a homer (5) for Double-A Arkansas. I ranked Lewis second in the Mariners system coming into the year, where I posed the possibility of him coming up to the bigs this season. That likely won’t happen, since he’s still in Double-A and I’d figured he’d be in Triple-A by now. I also thought he’d flash some more speed. Also wrong. He has just three steals in 77 games. The good news is he’s found his stroke. Lewis is hitting .349 in June and July after hitting just .227 in April and May.

Chase Strumpf, 2B | CHC – 6-for-10 with a homer (1) and two doubles (5, 6) in his last two games for the short-season Emeralds. I haven’t written him up yet since he’s new blood, but Strumpf has a good all-around offensive profile with a hit tool just a tick above average. That’ll play in most formats down the road. Plus the Cubs seem to pick good prospects out of trees. Strumpf was hitting .280 with nine homers and three swipes for UCLA in 63 games prior to going 64th overall in the draft. He should move fast through the system. Reminds me a little of Cavan Biggio.

Trent Grisham, RF | MIL – Hitting .271 with five homers and two steals in 16 games with Triple-A San Antonio. That’s 18 homers on the year for Grisham between AA and AAA. I didn’t rank him coming into the season, mainly because of his struggles in AA last year, but he seems to have made some genuine improvements, raising his average over 40 points while keeping the power – as well as the walk and strikeout rates – steady. I’d say he’s definitely worth a sneaky look if he’s available in dynasty formats.

MacKenzie Gore, LHP | SDP – Promoted to Double-A. I just went over Gore a week ago. Click that link or go to my author page to find it. Keep scrolling and you’ll find a post about Lance Berkman. I wish I was joking. I’m getting old you guys and four girls.