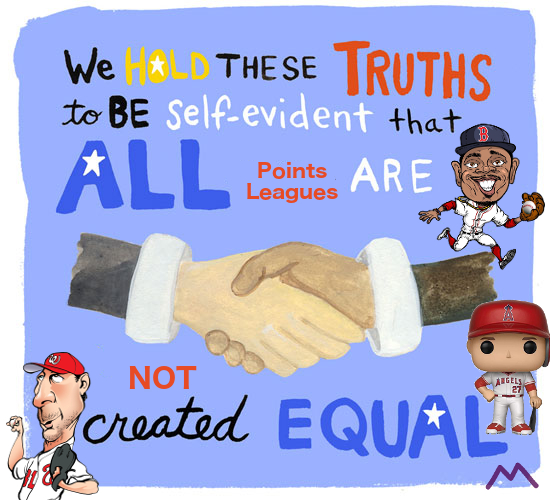 Knock knock. Who’s there? It’s your 2019 fantasy baseball points league draft. What are you waiting for? Open the damn door! With draft season just around the corner, I decided it was time to put together my points league spreadsheet. That and the avalanche of emails I got asking when it would be ready. Ok, perhaps avalanche was a bit of an exaggeration, but there was a small storm. Today’s post is the only post I author each year that most of you care about. Once I’ve put it out there I feel a little bit like a chick after a one night stand. However, by now I’ve come to terms with the fact that my popularity will peak early and taper off as the season progresses.

For those that have already drafted, here’s what I’ll say. Your draft was too early. I don’t think leagues should draft more than two weeks before Opening Day. Personally I schedule all of my important drafts no more than a week before. At that point you’ve got a pretty accurate picture of what’s what and have reduced the possibility of a Spring Training injury screwing up your chances before the season has even begun.

Although I’ve written as much quite often, it’s critical to recognize that all points leagues are not created equally, and as a result, rankings for one league most likely do not transfer to another. Over the course of the last twenty years of preparing for points league drafts, I found that most sources of advice only offer generic points league rankings. Last year I referred to this as the “one size fits all” solution. This works ok if you’re looking for a general view of the much bigger picture, but it’s not going to help YOU make the best decisions on draft day and thereafter. While there may be many similarities between rankings across points leagues, such as Mike Trout being the top hitter (although Mookie Betts is creeping into the conversation), why get into the batters box with a wiffle bat when Max Scherzer is on the mound? Instead, why not walk into your draft knowing exactly which player is the right pick for you each time you are on the clock.

“If you ask an expert for advice on your points league and they don’t ask you what your scoring system is then they are going to give you a mediocre response.” -malamoney

There are several key factors that influence points league rankings. The most important (by far) is the scoring system, but roster composition also plays a part (especially when ranking players across positions). This spreadsheet takes these elements into account and gives you the ability to enter not only your league’s scoring system, but also the number of players you start at each position so that the spreadsheet can customize rankings based on your league specific settings.

You’ll have to forgive me for what I’m about to do, but I really do not feel like reinventing the wheel with respect to how I explain how the spreadsheet works. Instead I am going to plagiarize myself. Is it considered plagiarizing if I am stealing from myself? I think I’m safe. If I’m not, does anyone know how I can sue myself. And if so, is it possible for me to actually make money doing so?

Most of the rest of this post is taken from last year’s post with a few minor updates scattered in. There aren’t many changes in functionality between last year and this year. Actually I don’t think there are any, but I do have several planned for next year. I did add tabs for “CF”, “RF” and “LF” for leagues that give a shit. Hold on, there was one change. I did add the ability to specify pitchers as just “P” instead of “SP” and “RP”, if your league is setup that way. As noted on the “Settings” tab, you can either set “P” or “SP” and “RP”. You cannot do both at the same time. It should be self-explanatory.

Under the “Scoring System” label on the “Settings” tab there is a dropdown that allows you to select the active scoring system to be used by the spreadsheet. When you change scoring systems, or make any other change to the “Settings” tab, you will need to click the “Calculate Rankings” button to generate the new rankings and update (re-sort) each sheet. When the spreadsheet detects a change to the “Settings” tab it will let you know and tell you to click the “Calculate Rankings” button when you are done making changes.

At the bottom of the “Settings” tab you will see two options that directly affect the ranking results. The first is “Reduce RP Weight“. By default my rankings treat the RP position equal to the rest of the positions. As a result, you will see some RP in the top twenty. While mathematically this might be the case, in reality it usually doesn’t make sense to draft an RP in the first two or three rounds (maybe more). By setting “Reduce RP Weight” to true my algorithm will lower the FVARz scores for relief pitchers, pushing them down a bit in the overall position-adjusted rankings. This feature is enabled by default.

The second is the “Hitters Advantage” option. Here’s what this does. When set to “yes” it will give all hitters a slight boost. It actually accomplishes this by giving all starting pitchers a slight reduction. This does not apply to relief pitchers. You can use “Reduce RP Weight” for that cause. The reason for this feature is because it is a popular strategy to draft strong hitters by focusing on the hitters in the early rounds. Many believe hitters win championships because hitters are more consistent. If you feel this way, or something like it, set “Hitters Advantage” to “yes”. It defaults to “no”.

You’ll also find a tab named “Your Team“. This will begin empty. You’ll find a section for hitters and pitchers. Each section will have headers and rows for totals and averages. These will likely contain zeros and #DIV/0! initially. Don’t worry, this is fine and expected. They will go away once you draft/add players. Do not edit this tab!

Here’s how you add/draft players. On the “Rankings” tab, you will see a column labeled “Drafted” at the far right. Initially it should be filled with the number zero (0). This means that the player has not yet been drafted. As your draft is progressing and players are being selected, you should manually update this column. If a player is drafted by another team, enter the number one (1). If the player is drafted by you, enter the number two (2). This will result in the players being color coded and will also automatically move your players to the “Your Team” tab.

Clicking the “Clear Draft Picks” button will set all values in the “Drafted” column back to zero (0). You cannot undo this action so be careful.

I’ve got more to say about the “Your Team” tab, but first let me quickly mention the “Draft Score” column on the “Rankings” sheet. This value is determined by subtracting a player’s rank from his ADP. For example, if Freddie Freeman is ranked 10th and his ADP is 28, then he will have a “Draft Score” of 18. That means that if you drafted Freeman at his ADP of 28, you’d be getting him 18 picks after where he would be picked if everyone in your league picked based on your league-specific rankings.

This does not mean you should take Freeman with the 10th pick, but it serves as a gauge to let you know what kind of value you are getting from a player based on his true (league specific) ranking versus where most people are generally drafting him. In the case of Freeman, I’d definitely grab him in the second round and know I am getting value.

Players with a negative “Draft Score” mean that if you draft them at their ADP, you are not getting good value. They will not be on any of my teams. Not unless they slip into a more profitable draft position.

Let’s jump back to the “Your Team” tab. This is where you can see the players you have marked as drafted to your team. That means you entered a “2” (no quotes) in the player’s “Drafted” column on the “Rankings” tab. As players are added the “Totals” and “Averages” rows will populate. Also, each player’s FPTS (fantasy points) column will be highlighted with one of the following colors: Green, Purple, Orange or Red. Here’s what they mean. Green indicates that the current player is estimated to score a decent amount of more points than the average player. The set of players used in this comparison is only players that are above the replacement level player.

Keep in mind that these are still experimental indicators. Take them with a grain of salt. Whatever that means.

If you feel the urge to modify a player’s estimation, you will need to do so in two places. Let’s say you are convinced that Rhys Hoskins is going to hit 50 home runs. You need to edit his HR total on both the “Hitters” and “OF” sheets. For players with multi-position eligibility, you will need to update all appropriate position tabs. Unfortunately this is a very manual process. Deal with it :-)

If there was one bit of advice I could give you it would be this. Notice this is in bold. Do not change anything on any tabs other than “Settings” and “Rankings”. On the “Settings” tab enter your league details. Then click “Calculate Rankings”. Then go to the “Rankings” tab. Here you can indicate which players have been drafted. That’s all you need to do. If you start making changes and end up in some funky state, you should just download a fresh copy and start over.

While you can set multiple (up to three) different custom scoring systems, if you are going to use this on draft day, I suggest you create a copy of the file for each different league. It’s will just be a lot simpler to keep track of each league’s drafted players.

If you find an issue, please let me know. If you realize that a player is missing (entirely possible), let me know.

I plan to do a more in-depth analysis of data contained within this spreadsheet, but in the spirit of getting it to all of you as soon as I could, you’ll have to wait until my next post for that. For now, enjoy. I hope it helps. Wisdom, Power and Courage!