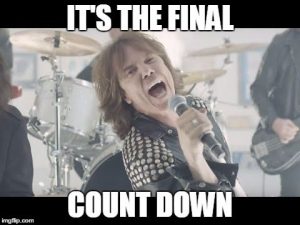 Razzball friends and family, we are in the final week of most H2H leagues.  What a long strange trip it’s been?  Nate? What’s up with all the music references?  Some would say it’s because some are hearing the fat lady singing, but not us!  Not you!  If you have been following all year, we have had some really nice wins on the season.  Cedric Mullins, Robbie Grossman, Raimel Tapia, Robbie Ray, and countless others.  I am not trying to pat myself on the back, but it’s nice to have some W’s to go along with the L’s.

Are you fighting for that final playoff spot? Have you already punched your ticket into the playoffs?  Regardless, now is the time to fine-tune that fantasy team.  Take a look at your upcoming schedule and see if your opponent has been wiping the floor with offense or with pitching, and align your team to match their strengths or weaknesses.  If you happen to have a bye, look ahead two weeks and try to see which pitchers may have 2-starts, or if there are any matchups at Coors, etc.

While it’s nice to look ahead, let’s not get carried away!  Here are the key players who will help you get ahead in H2H for Week 21!

Nicky Lopez, 2B/SS, KCR-40% rostered in Yahoo– Just getting the smallest of advantages can separate a win and a loss in the stolen base category.  Nicky Lopez has been a monster on the basepaths over the past 2 weeks.  His 8 stolen bases during that time are 2nd to only Lou Brock, I mean Starling Marte, who is doing his best Brock impersonation lately.  Let’s dig a bit further.  For starters, he has put together a tidy .358 OBP at home this season.  Add in the fact that they play the White Sox and catcher Zack Collins, who has allowed the 5th most stolen bases, and Lopez is looking extra appealing.  Want me to do a little Natradamus action?  Put together a Dylan Cease start (16 sb’s allowed-3rd most in MLB) with Zack Collins (5th most allowed) and you have a recipe for a Sunday Funday to win SB’s.

Leody Taveras, OF, TEX-7% rostered in Yahoo– I can remember back in April when the Taveras hype was a little over the top, but here we are again.  No, the hype isn’t there, but the chance to win you an H2H SB category is definitely within the realm of possibilities.  Recently recalled from AAA Round Rock, the speedy Taveras has been put at the top of the Rangers lineup.  While at AAA, Taveras swiped 13 bags and joins a Rangers team that is getting the green light more than the Texas Speedway. (6th most SB in MLB).  You will most definitely need to be reliant upon speed to roster Taveras, but if he uses this week to get on base, you might have found your speedster for the playoffs.

Jo Adell, OF, LAA-16% rostered in Yahoo– It’s hard to see Jo Adell’s name and not think of a sub-par rookie season.  I don’t disagree, but let’s peel away some layers of this onion and hope it brings some tears of joy.  Over the past 2 weeks, he has driven in 12 runs, while hitting in the 8-hole.  While hitting 8th, he has carried a .333 average.  Add in the fact that he has a .318 average with Runners in Scoring Position (RISP), and there is some light at the end of this tunnel.  Just to compound the issue, the Angels are going to continue to keep trotting him out while the rest of the team is on the IL or being indicted.

Austin Hays, OF, BAL- 11% rostered in Yahoo– The playoffs will make us do some crazy things!  Recommending Austin Hays is most likely something that I won’t see a ton of analysts do.  Hear me out tho.  This week he is set to face 5 of 6 left-handed pitchers.  On the season, he carries a 4.5 HR% against them.  If we go even a step further, we see that on the road vs LHP, he actually improves that HR% to 5.6%.  While it’s easy to reach and pull some favorable stats, here are some of the lefties he is facing.  Robbie Ray (7th highest HR/9)  Ryu (.96 HR/9)  Heaney (1.88 HR/9).

Tarik Skubal, SP, DET-49% rostered in Yahoo– I am really starting to love watching Skubal pitch, albeit the number of starts may be limited as he approaches the 150 inning mark.  As we have come to enjoy out of Tarik is the potential for a double-digit strikeout performance, but at the same time, multiple HRs are allowed.  This week tho, he gets a scuffling Oakland A’s team followed by a Reds team that could pose a threat.  The matchup at home vs the A’s, where he has been a lot better at reducing the HRs allowed, looks to be the better of the two matchups.  As I mentioned, going into Great American Small Park with a penchant for the long ball doesn’t exude confidence, but their k% makes me want all the Skubal this week.

Andrew Heaney, SP, NYY-50% rostered in Yahoo- This is most definitely all about the fact that the Yankees are absolutely cruising right now.  But then again, isn’t that always the goal when your chasing Wins.  I totally understand the concern with ratios, but take away the Field of Nightmares game and he has been better than the numbers imply.  Don’t mistake me, he has not been fantastic, but there is reason to be optimistic for the W’s.  The matchup vs his former team isn’t ideal, but then he gets the O’s, Nuff said.

Drew Rasmussen, SP/RP, TBR-4% rostered in Yahoo– Rasmussen is one of my favorite options this week.  For starters, he carries the always optimal dual eligibility tag of SP/RP.  Secondly, he has been massively efficient.  Let’s hope the efficiency leads to some longer starts to get those W’s.  This week he is slated to face the Red Sox, who they have beaten in 7 of their past 8 games, and the Twins, who have been middle of the pack against righties.

Spencer Patton, RP, TEX-2% rostered in Yahoo– With Joe Barlow on the IL, it is safe to assume that the Rangers will turn to Patton.  With matchups vs the potentially Story-less Rockies, there could be SV opps.

Hansel Robles, RP, BOS-9% rostered in Yahoo– I don’t believe that Barnes is in jeopardy of losing the closer’s gig, but it’s worth monitoring.

Tyler Wells, RP, BAL-1% rostered in Yahoo– It’s Baltimore.  You, the reader, have only won 1 less game than the O’s since 8/1.  The Orioles play the Jays and Yanks.  Luckily they get the Royals the following week, so maybe an SV?

Scott Barlow, RP, KCR-33% rostered in Yahoo– Appears to be the favorite for saves in KC.  I have been a huge Barlow fan since Day 1, so it’s nice to see him get his chance.

David Bednar, RP, PIT-14% rostered in Yahoo– It’s Pittsburgh, I know.  The fact of the matter is that Bednar has the 9th and they do play the Cubs.

always a good read Nate!
thoughts on the recent skid with travino?
still a hold, or replaced with any of these guys with favorable match ups rest of the way?
thanks!

They pitched him in 3 straight prior to the skid. I personally think he will be ok, but I wouldn’t be surprised if they give Romo a chance or two.