Last week is a good representation of the closing month of the fantasy baseball regular season. We had our top recommendation pushed back, and he didn’t even make a start. That sort of crap happens way too often this time of the season, and it makes picking streamers more challenging than ever. With that said, we got some monster performances from our other options, and we’ll keep that momentum rolling here. This is the final week for most of you, so I want to thank all of you for reading and commenting throughout the year! Without further ado, let’s get into the final full week of the season!

Greene’s 4.91 ERA will not sway you into using him, but this guy will be a stud. He was the second pick in the 2017 draft for a reason, displaying some of the best stuff out there. He’s been putting that on display recently, registering a 1.06 ERA, 0.59 WHIP, and 14.3 K/9 rate across his last four starts. The strikeout stuff is genuinely, absurd and it’s scary since Greene is only scratching the surface of what he could become. That form should carry over well in this matchup, with Pittsburgh ranked bottom-three in runs scored, OBP, OPS, wOBA, xwOBA, and K rate. Greene actually had the best start of his career against them earlier in the year, striking out nine batters across 7.1 hitless innings. This is The Streamonator’s favorite plays of the week, projecting Greene to generate $26.4 worth of value.

We had Marquez in here two weeks ago as one of our streamers, and we’re going right back to the well. Marquez has had a nightmarish season at home but has been a borderline ace outside of Coors Field. That’s no surprise since that is the most hitter-friendly park in baseball, with Marquez maintaining a 3.50 ERA and 1.18 WHIP on the road this year. That’s more on par with his 3.69 career xFIP, and it’s just a matter of time before Marquez switches teams and develops into an ace for another team. The drastic switch to a pitcher’s park like ORACLE is the icing on the cake, with Marquez allowing three runs or fewer in his two matchups with the Giants this season while striking out at least six batters in each. That’s no surprise since San Fran sits 20th in xwOBA and 27th in K rate. 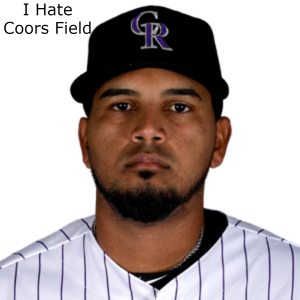 It was a rough start for Lauer in his return off the IL, but this dude was developing into a stud before getting injured. In fact, Eric established a 3.54 ERA, 1.22 WHIP, and 8.5 K/9 rate through his first 25 starts. That’s tough to find from a player off the waiver wire, especially for a team battling desperately for a playoff berth. His biggest asset here is that he gets a home start against Miami, who rank 27th in runs scored, OBP, OPS, and wOBA. He’s likely to enter this matchup as a -200 favorite or higher, which is even more enticing since Eric has a 3.07 ERA, 1.15 WHIP, and 8.6 K/9 rate at home since the start of last year.

It’s been tough to predict when Contreras will pitch, but Pittsburgh has to play him in these final two weeks. He’s earned a spot in this rotation, allowing four runs or fewer in 17 of his 19 starts this year. He’s also got a 2.53 ERA, 1.21 WHIP, and 8.0 K/9 rate in those outings. That’s the ace we saw in the minors, amassing a 2.97 ERA, 1.05 WHIP, and 9.3 K/9 rate since 2018. Getting to face Cincinnati is comparable to a Triple-A lineup, with the Reds ranked 24th in OPS, 23rd in K rate, and 27th in xwOBA. Contreras allowed just one run in each of his two road meetings with Cincy this year, and he should fair even better in the friendly confines of PNC Park. This is one of The Streamonator’s favorite plays of the week, projecting Ronasy to provide $21.4 worth of value.

Civale has a 2.91 ERA and 0.94 WHIP across his last seven starts. One of those was against this terrible Royals lineup, with Civale throwing seven one-run innings to start this resurgent second half.

Manning also faces this 25th-ranked Royals offense, tallying a 3.43 ERA and 1.17 WHIP for the year.

Irvin has really struggled the last two weeks, but he had a 3.35 ERA and 1.06 WHIP through his first 24 starts. He should be able to recapture that form against an Angels team that sits 26th in wOBA and dead-last in K rate.

Henderson is finally getting picked up in some leagues, and we truly believe he’ll be one of those “league winners.” I hate that term, but it’s very possible he’ll be one of your best hitters in these final two weeks. The youngster had 27 homers, and 27 steals across 152 minor league games over the last two years, generating a .298 AVG, .402 OBP, .535 SLG, and .937 OPS in that span. Gunnar has been the same guy at this level, totaling a .296 AVG, .345 OBP, .506 SLG, and .851 OPS. More importantly, he’s been hitting first, third and fifth recently, which is huge for his fantasy value. The biggest variable here is the circumstance, with Baltimore being one of just four teams with seven games this week. Take that extra game from this talented prospect and ride him to your ship!

We had Pederson as one of our streamers last week, and we have to ride him in this spot. The former Dodger has been destroying baseballs recently, tallying a .325 AVG, .398 OBP, .545 SLG, and .943 OPS across his last 23 games. Most of that damage has come against right-handers, with Pederson providing a .269 AVG, .345 OBP, .516 SLG, and .862 OPS with the platoon advantage in his favor. That’s amazing because Joc faces six righties in all six of his games this week! It’s certainly not a murderer’s row of righties either, facing Jose Urena, Chad Kuhl, Ryan Feltner, Zach Davies, Merrill Kelly, and Zack Gallen. The final two are the only concerning matchups, but it really doesn’t matter behind those sensational splits.

I’d be lying to you if I said I knew much about this kid, but Carpenter has been killing it since his call-up. The 25-year-old has played 29 games at this level, producing a .263 AVG, .516 SLG, and .833 OPS. That’s tough to find from a player who’s 99 percent available, especially since Carpenter compiled a .313 AVG, 3.80 OBP, .645 SLG, and 1.020 OPS in the minors this year. That has the youngster batting third and cleanup, doing all of the damage in this Detroit lineup. These matchups are magical, too, with the Royals ranked 26th in ERA and dead-last in WHIP while the Twins sit 19th in ERA.