It’s another exciting week to be a baseball fan, as Adley Rutschman, Matthew Liberatore, and Nolan Gorman have received call-ups from their respective MLB clubs. Mike Trout is doing Mike Trout things, as he’s now the only player in history with 1,000+ R, 200+ SB, and 1.000+ OPS through his age-30 season (per MLB stats).  We also have seen fourteen position players throw a pitch in a game this season.

A couple weeks ago, we took a look at shortstops, now we’ll take a look at second basemen whose small sample sizes are fact or fiction…

Mookie Betts – Dodgers – Betts has dug himself out of his slump and his stat line stands at a  respectable 38/9/23/.273/.360 line with a few steals tossed in. It’s safe to say he is over last year’s hip injury, although I’d like to note his 5 year sprint speed and barrel rate have been on the decline each year. Betts should stay a top 10 outfielder for 2022 even if he doesn’t reach his 2018 MVP form. If I was in a keeper league, I’d be skeptical of Betts from 2024 on.

Jose Altuve – Astros – Altuve has been on a tear since his activation from the IL. While his age and hamstring injury has seemingly ended his days of stealing bases, he’s got a career-high wOBA of .392 and a 167 wRC+, with the underlying stats suggesting he’s no fluke.

Trevor Story – Red Sox – Sox fans were seemingly almost ready to call Story a $140M bust and were flashing back to nightmares of the ill-fated Carl Crawford contract, but a hot two weeks (12/6/18/.273/.346/4) line has certainly eased some of the worries of BoSox nation. What’s changed for Story? Story seems more comfortable at second base and he doesn’t seem to be pressing as much at the plate. Story has been laying off junk off-speed pitches out of the zone, and has shortened up his bat path. While Story may not reach the inflated Coors numbers of his peak, he’ll be a productive player. Managers who drafted Story in 2022 can take a deep breath.

Is Story legit? For the most part

Jean Segura – Phillies – Speaking of hot hitters, how unexpected has Segura’s hot streak been over the past couple of weeks? Segura has always exhibited a nice blend of power and speed while hitting for a good average throughout his career and has found a home in the 5-hole in the loaded Phillies lineup. A quick look at his Savant page indicates Segura has earned his current stat line. The chase rate looks rough. If you’re in an OBP league, you can certainly overlook the walks, as he’s definitely exceeded expectations as a ~2oo ADP pick. 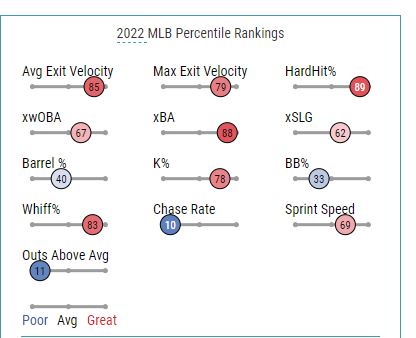 Jurickson Profar – Padres – Profar owns a 22/5/18/.217/.335 slash line. At first glance, he looks like a player who simply had a good couple weeks to start the season which has inflated his season stats a month-plus into the season. While he’s walking at a high rate and is showing much-improved plate discipline, unfortunately, Profar is making too much weak contact, erasing a lot of the progress he’s been making. Unless you’re in a deep league, Profar is hurting you in more categories than not.

Owen Miller – Guardians – Miller is another player who has slowed down significantly over the past month, slashing 14/2/9/.208/.264 over the past month. It seems like the league has figured Miller out, as his hard hit/barrel rates have been trending downward. For now, I believe it’s too early to write Miller off, but I’m watching him closely to see if he can adjust back to the league in his first full season. If I own Miller, I’m still holding him.

Is Miller legit? Too early to tell

One of the few prospects called up this weekend, Gorman is a polarizing prospect. He’s been destroying AAA, has prodigious power, and is a product of a great Cardinals farm system. I’m going against the grain and am skeptical he will sustain his early MLB success, as he owns a 34% K rate and a 62.4% contact rate. A few MLB games are definitely too early to write anyone off, especially one with an impressive prospect pedigree. I think Nolan Gorman will eventually have a productive MLB career, but 2022 may not be his year. Jose Miranda, for example, hit .340 in the Minors last year and has struggled in his first MLB go-round.

Is Gorman legit? Too early to tell, but leaning Fiction

Thanks for reading – have a great week.

Segura or Brendan Rodgers?
Both vs Lowe ROS?

I’ll take Segura at this point over Lowe ROS -back injuries can zap power.

What’s your take on Jazz’s start?

Jazz has enjoyed a nice month to the season, however I’m concerned about the K’s and his hamstring injury, so I wouldn’t be surprised if we see a rough stretch ahead. That being said, Jazz is a young and talented player and should adjust back once the league adjusts to him.

How would you classify Albies? His exit velo #’s look awful, but he has 6 HRs. Plus he’s always been very streaky.

I think you hit the nail on the head on all points. People around the Braves org mentioned Albies has been struggling a bit more against off-speed pitches. I trust his talent and think he gets back to what we usually see out of him. Plus he shouldn’t be bounced around the lineup too much now that Acuña is back in the mix.

Who do you like at 2B ROS? Semien or Muncy?

Scar
Reply to  Don't be a Hader

I lean Muncy because Semien has been so bad. At least Muncy can blame his UCL on a slow start!