I used to play a lot of hoops with my friends. I also used to smoke a lot of weed. Usually not a good mix, but everytime before the game, I’d yell to my buddies, “The rim looks like the size of the ocean. Just keep feeding me. And feeding me. And feeding me.” More often than not, it was but a figment of my imagination. That’s what happens when you’re high. But, but, but….Every once in a while, the heat checks would get cashed and all everyone would hear was, “Splash, splash, and splash” reverberating off the walls inside the gym. My buddies learned (after one night), that I was straight trash playing high. After the tenth time, they would just let me run around like a headless chicken, but when I got hot, they knew not to mess around, as they would just keep feeding me, and feeding me, and feeding me until whatever it was wore off. The beautiful thing about baseball is that the sample sizes are usually large that regression to career averages can be expected. In a 60-game season, though, anything can happen. A hitter can get hot and stay hot. Randal Grichuk of the Toronto Blue Jays is hot. Can he maintain?

The power is real, as he’s had an ISO above .200 in every season except his rookie one. We know Grichuk can mash home runs, so he’s going to continue doing that. The question is about leveling out the streakiness. In the past, we would jump aboard the Grichuk train when he was hot, but know full well that we’d have to jump off at the first sign of slowing down. In a shortened season, he could stay hot for most of the season. Are there signs that he’s improved his approach at the plate to lend more confidence in that idea?

The groundball rate has increased. I think I have an idea. Looking at the Brooks Baseball heat maps for pitches thrown to Grichuk, pitchers like to attack him down in the zone. In the past, this area would likely result in a whiff. Now, he’s making contact and putting the ball in play. That could explain the increased groundball rate and BABIP.

Grichuk has always mashed fastballs. This season is no different, as he’s slugging .444 against the pitch. Where he’s had trouble in the past has been with breaking and offspeed stuff. He still struggles with breaking pitches, but he’s mashing offspeed stuff this season. In 50 offspeed pitches, Grichuk has a .412 batting average and 1.000 SLG against those pitches. Last season, for perspective, he batted .189 and had a .351 SLG.

The sample size is small and regression would likely happen in a normal season, but we are almost at the half way point for the 2020 Rona season. Grichuk could maintain this heater. And if he does, then we would be schmucks for not recognizing him. 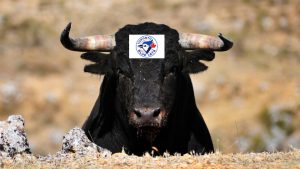 What the heck do we do with Mondesi the rest of the season? I’m leading in steals by a considerable margin thanks to Robert, Ramirez etc. I’ve just been benching Mondesi and his sub .200 average and zero counting stats.
I’ve tried throwing him in a few trades as an add on to dump him and haven’t had any takers yet. At what point is he a drop?
P.S- I will never draft a one category “elite” player ever again.

Can’t do much. Too valuable to drop, yet too doodoo to start or trade away. Build a shrine and pray every night that he gets hot

Dynasty league trade. I play in a H2H 5×5 scoring league
Without team needs coming into play who would you rather own moving forward Clevinger or Franmil? Thanks!

Awesome write up, I’ve been trying to figure out if I should trade him or not and this seals it, I won’t be.

Thanks! Well, I’d still explore trades, as you may be able to find an upgrade

Clevinger – what’s he worth? Scheduled to start tomorrow (I think). Give up any of Baez/Anderson/Swanson for him?

I wouldn’t start him against MIN. As for worth, the Trade Analyzer has him close to Baez, but it depends on your roster, league, and roster of the Clevinger owner

The home park factor also a big positive, along with a big home/away split. If I’m counting right, the Blue Jays have 22 home games and 10 away games left. Also batting second consistently. In the lineup today after a mild injury last night.

For sure. Good pull on the schedule

While I’m here … Also need to sit one (activating Acuna):

So, who do I sit? Based on performance to-date, Lauriano is the obvious choice, but I had such high hopes (NOT what you were speaking about in the opening para) for him.

I think I’m with you in sitting Laureano for now. Reassess when he starts getting hot

Catcher scab. Please pick one for the next week (if not longer):

I know its a long list and probably doesn’t matter anyway (they all suck), but your advice would be appreciated nonetheless.

It was between Jansen and Sisco for me. I lean Jansen because MIA and BOS pens are terrible and he gets the most ABs.

Lol. My buddies would say the same thing!