Straight from my basement bunker to yours, our first “Corona” post (as a philosopher once said:”You can have any virus you want… as long as it’s a Corona.” is here! And we’re talking about… Marcus Stroman‘s strikeout rate? Well, yeah. As we enter this elongated (heh) period of nothing going on, what better way to proceed than focusing even more on information we already have. And what does that exactly mean in this context? Well, in terms of Marcus Stroman, there seems to be consensus that he might be alright this upcoming season (currently Razzball ranks him just above Julio Urias as the 43rd overall pitcher as of this writing, and is generally in the top-100 no matter which platform you choose). Whether you consider him a sleeper, a buy-low, or a player with expanded potential (why not all three!), this post will act as confirmation bias. Yes, I only offer the best bias. For those who are a bit more bullish (as the stock market shows, you should never go bear), this post is made for you. Think of it this way: Everyone knows Stroman did better the second-half. What this post presupposes is… maybe it can continue?

“Stroman’s K/9 went from 7.0 to 8.8 from the 1st half to the 2nd half and had a 3.28 ERA with a miserable BABIP (.332). Of course, he’s prone to some BABIP bad luck and iffy defense because he has a top five ground ball rate in the majors. His Ks only on the Mets were 9, recording 60 Ks in 59 2/3 IP. If Stroman holds these improvements to his K rates, and he’s gonna go from a ‘just okay’ fantasy number four to a number two, bordering on an ace. Dare I call him, Black Greinke.” – Grey.

I don’t quote Grey just to read what’s right, I also quote Grey so I can read his sweet nothings in my own voice. Look, it’s not sexual if you do it in your own voice! But why is Grey right? Because he always is? That’s it folks, we’re done here, let’s wrap it up.

While I’d rather be writing a Corona post on Kenedy Corona, the current pandemic which has gripped the world the last month has now arrived in America and already affected the greatest two pillars of our society: Tom Hanks and Baseball. While apple pie seems to be unaffected, I can say that Tom Hanks infection has directly led to my loss of appetite, ergo, apple pie is affected! Science, baby. Grey, of course, had an amazing write-up covering the shuttering of spring training and delay to the regular season and so with this post, I’d like to delve a little deeper into the macro and micro effects that will occur moving forward. I’d also like to keep a sharp focus on just the impact that COVID-19 will have on baseball and fantasy baseball only, so while I realize it’d be weird to ignore the human cost entirely, I want to state that for the most recent CDC guidelines, go here, and there’s a fantastic live map tracker here. And be sure to start showering yourself in Purell hourly and avoid touching yourself. (Bathing suit areas should be safe. And if it isn’t, well, may God have mercy on us all…)*

*The last two recommendations were jokes, so don’t sue bro. But to be honest, a Purell shower doesn’t sound like a net-negative, so who knows…

Shin Soo Choo has been around for a while. I know this because I’m a pretty sentimental person. I’m the guy who stops walking when he smells a familiar fragrance, trying to pinpoint the memory. (Generally it’s an ex and nausea immediately follows.) I’m the guy who starts crying when someone quotes The Matrix, and I’m all smiles when I see how much Lego sets cost nowadays. (So much money saved by being an 80’s kid.) And of course being part Korean, Choo was a cornerstone to almost every one of my fantasy teams the last decade, because racism or something. Choo has also been entwined with my long history of content here at Razzball as a vehicle for kimchi jokes, because racism or something. But despite all that racism, there is another trend I’m noticing, and that’s I really have to remember to draft him this season. Granted, there are some red flags in his profile that we’ll address, but despite waxing poetic about how all my ex’s make me sick, I wanted to make sure you didn’t forget about Shin Soo Choo either…

Welcome to the 2020 Razzball Team Previews! (Our “2020” comes with more Jay and less Barbara Walters!) (That joke is probably older than you!) Sorry for all the parentheses and exclamation points, I just get so excited when I think about Barbara Walters, and don’t even get me started on Hugh Downs… Regardless, here, you’ll find everything you need to know about each team to get yourself ready for the upcoming fantasy baseball season, Razz-style. So while you’re stretching your lats and relearning calculus to get that upper hand on your fantasy peers, why not also check out what the Los Angeles Traders have in store for you and your fantasy team?

Welcome to the 2020 Razzball Team Previews! (Our “2020” comes with more Jay and less Barbara Walters!) (That joke is probably older than you!) Sorry for all the parentheses and exclamation points, I just get so excited when I think about Barbara Walters, and don’t even get me started on Hugh Downs… Regardless, here, you’ll find everything you need to know about each team to get yourself ready for the upcoming fantasy baseball season, Razz-style. So while you’re stretching your lats and relearning calculus to get that upper hand on your fantasy peers, why not also check out what the Baltimore Birds with orange on them have in store for you and your fantasy team?

That’s right folks, we’re doing an expert league from the NFBC with the D-O-double-jay in the LBC while AFK and whatever other acronyms you can think of. ALL THE ACRONYMS. So while I’m sippin’ some gin n’ juice, with literally no money on my mind and my mind in desperate search of money, I decided to summarize this expert draft for mass consumption. [Insert my usual statement on how I generally prefer “writers” over the term “experts”, mostly because I’ve never considered myself an expert at anything in life, here.] And don’t worry, we won’t spread this series out too much, I think we’ll focus this post on the first five rounds, then in a future post all the middle rounds, and then we’ll follow up with one final review, focusing on the late-round sleepers and trying not to draft Domonic Brown by mistake. Life goals! Now, for those unfamiliar with the NFBC, it’s your general Roto 5×5 setup with two catchers, 1,000 innings pitcher minimum, and 15 total teams with their world famous marathon drafts that have their own bicentennial celebration midway. For this specific league, I’ll be representing Razzball among other industry stalwarts like Dalton Del Don, Andy Singleton, and Bret Sayre among many other talented fantasy writers. And so, here are how the first five rounds went…

Welcome to the 2020 Razzball Team Previews! (Our “2020” comes with more Jay and less Barbara Walters!) (That joke is probably older than you!) Sorry for all the parentheses and exclamation points, I just get so excited when I think about Barbara Walters, and don’t even get me started on Hugh Downs… Regardless, here, you’ll find everything you need to know about each team to get yourself ready for the upcoming fantasy baseball season, Razz-style. So while you’re stretching your lats and relearning calculus to get that upper hand on your fantasy peers, why not also check out what the World Champion Nationals have in store for you and your fantasy team?

Ketel Marte had a very fine season in 2019. In fact, Ketel Marte had such a fine season that most of us have now priced in that this fineness probably won’t happen again. Much like when I’m walking down the street and people are screaming at me the same thing. (I’m more of a capital “F” Fineness type of guy.) After hitting 329/389/592 with 32 home runs and a staggering .264 ISO, his high BABIP has been targeted as reason for regression. While this stat remains an easy crutch to make fast conclusions, if I could just make one important point: I have a higher Fineness factor than Ketel Marte. Most people, actually. But if I could make two important points; I’d also say that Ketel Marte’s demise has been greatly exaggerated…

Joc Pederson can hit lefties. He just doesn’t know it. Neither do the Dodgers. Neither do you! But the Angels? They might have known…

It’s been said that Joc Pederson is a dude who doesn’t upset expectations (it was me, I said that.). A true fantasy bro in a lot of ways. Not too expensive, not too popular. He does something pretty well (30ish homers), but also doesn’t show up for about 40 games a year. Why? Joc Pederson can’t hit lefties. Wait, what? It doesn’t have to make sense, you just have to believe it makes sense, science at its finest MAAAAN. With all the Mookie-drama (good enough to use, not good enough to hashtag), the fallout has been expansive and on-going. While Pederson’s under-the-radar trade to the Angels (along with Ross Stripling) had been officially nixed last week, there is still time for Dodgers to complete their quest on buying everything they can, and then filling the gaps with league-minimum commitments (which would have been Luis Rengifo in this case). While the predicate isn’t contingent on Joc finding a new home, it certainly wouldn’t hurt, and there is enough noise here to think that one day, sometime soon, Pederson could finally become a complete hitter. As soon as this year? Let’s find out… 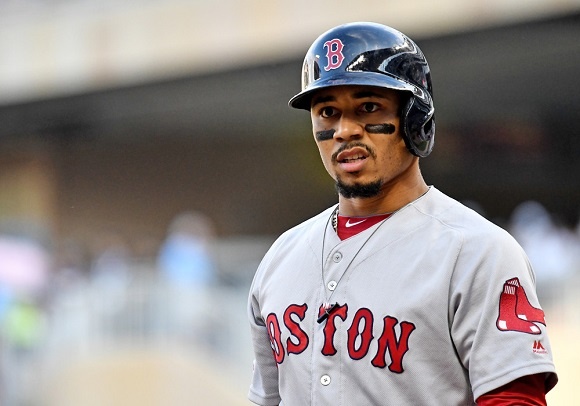