We’ve seen yet another top prospect called up to the majors in Gabriel Moreno of the Blue Jays. But I’m not going to focus on him yet. Let’s let him get settled in before we delve into what to expect from him. But here is a hint – I would consider him a Top Fantasy Keeper.

This week, I want to talk about Aaron Ashby of the Brewers, Michael Harris II of the Braves and Trevor Larnach of the Twins.

Ashby is a left-hander who moved through the Milwaukee system with very little fanfare. Fantasy owners, however, have taken notice of him as he is owned in 68% of Yahoo leagues and 40.7% of ESPN leagues. Unlike Ashby, Harris is a well known top prospect, entering the season ranked as the 46th best prospect by Baseball America (BA), 65th by MLB and 58th by Baseball Prospectus (BP).

Recently called up by the Braves, Harris is rostered in only 26% of Yahoo leagues and 7.9% of ESPN leagues. Meanwhile, Larnach is a former top prospect who was ranked in the Top 100 by BA, MLB and BP ahead of the 2021 season before surpassing prospect status that year with the Twins. If you go by prospects rankings, Ashby is supposed to be a dud while Harris and Larnach are studs. But maybe Larnach is a dud if you look at his 4% roster rate in Yahoo and 2.5% roster rate in ESPN leagues.

Sometimes (many times?) prospects rankings get players completely wrong. Let’s examine if they were wrong or right with Ashby, Harris and Larnach.

After graduating from high school, Ashby went to Crowder Junior College in Missouri and became one of the top JUCO pitchers in the country. In his second season there in 2018, he racked up 156 strikeouts and had an amazing strikeout rate of 18.8/9 innings, leading him to be drafted by the Brewers in the 4th round.

Joining the professional ranks that summer, Ashby had a 3.59 ERA and struck out 10.3 batters per innings in Rookie and A ball. In 2019 he threw 126 inning and had a 3.50 ERA, 1.278 WHIP and a 9.6 K/9 rate as he was named the Brewers’ Minor League Pitcher of the Year. COVID forced Ashby to spend 2020 at the team’s alternate training site, but he was invited to the major league camp in 2021 and made his debut with Milwaukee that season, appearing in 13 games while making four starts. 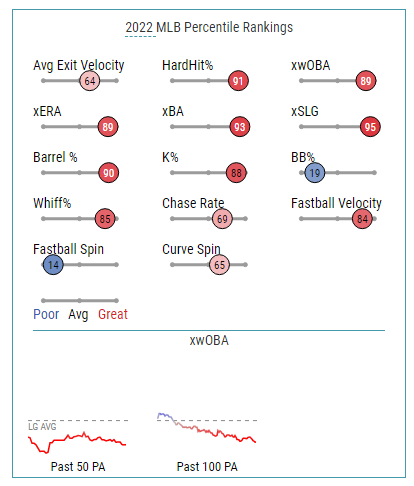 Ashby has above average pitches in his sinker and curveball. Ashby’s calling card, however, is a nasty slider. On average the ball moves 10 inches towards a right handed batter and drops 43.5 inches. League average horizontal movement is 6 inches and 38 inches drop. The slider is set up by his sinker that averages 96 mph and his curve that comes in at 79 mph.

If you look at the image above, you see a lot of red dots. Just look at his percentiles when it comes to hard hit, xwOBA, xERA, xBA, xSLG, barrel%, K%, Whiff% and fastball velocity

One question fantasy owners likely have when it comes to Ashby is this – is he a starter or a reliever. The Brewers used him mostly out of relief last year and this year he has made seven starts while making six appearances as a reliever. Outside of the top closers, fantasy relievers don’t hold a lot of value – at least not in a keeper league. Ashby also struggles with his command at times.

In his first four starts, he allowed 16 walks in 19.1 innings of work. However, over his last three starts, he’s issued 3 walks in 16.2 innings but has allowed 24 hits, with 13 of those coming in his last outing against Washington.

Harris was a two-way star in high school in Georgia, and many scouts wanted him to be a pitcher. But the Braves saw the athleticism that Harris has and drafted him as a position player in the third round of the 2019 draft.

While the Braves were thrilled to draft him, they probably didn’t expect him to be patrolling the outfield for the team this season at the age of 21. But that is exactly what Harris is doing. He is an aggressive hitter and has shown an ability to make a lot of hard contact. Through his first 13 games, Harris was slashing .298/.327/.447 with five doubles, one triple, five RBI and one stolen base.

All players have a weakness or two. Right now, it is Harris’ strikeout rate and lack of a walk rate. In the minors, he had strikeout rates of 19.8%, 18% and 19.9% and currently has a strikeout rate of 22.5% with the Braves. For a hitter who is not going to hit a lot of home runs, it would be nice for him to lower that rate. And Harris needs to walk more as he has a 4.1 walk rate with the Braves and a career rate in the minors of 8.4%

Larnach had an outstanding career at Oregon State, capped by a junior season in which he slashed .348/.464/.652 with 19 homers and 77 RBI in 68 games. Those numbers led him to being drafted by the Twins with the 20th pick of the first round.

But the success Larnach had with the Beavers hasn’t carried over in his professional career. As I mentioned above, he was a top 100 prospect by Baseball America, MLB and Baseball Prospectus ahead of the 2021 season. That is thanks to a career .292/.360/.441 slash line in the minors and a nice easy stroke with massive power as you can see on these two homers here and here. 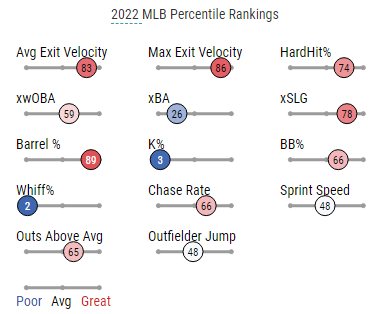 Larnach ranks well compared to his peers in MLB when it comes to EV, max EV and barrel percentage. But his strikeout percentage and whiff percentage are horrible and his strikeout rate was 34.6% in 2021 and 31.7% this season. The MLB average is 22.9%. However, he does have a walk percentage of 10.3 percent this season, which is above the average rae of 8.6%.

If you have been reading this column since it started, you know I tend to stay away from young pitchers due to how inconsistent they can be. Ashby has shown that this year. But being wary of young pitchers is being smart. To ignore them altogether is just stupid. The Brewers have shown how well they develop pitchers, and they have a history of putting starters (like Corbin Burnes) in the pen early in their career before transitioning them into full-time starters.

If Ashby is sitting around on the waiver wire in your league, you would be silly not to snatch him right now. Yes, his last two starts have not been great, but no pitcher is perfect every time they take the mound. Ashby will surely hit a few more bumps in the road. That shouldn’t prevent you from trying to add him to your roster. To me, he is a future stud.

AND WHAT ABOUT HARRIS AND LARNACH?

Harris was widely regarded coming out of high school and has shot through the Braves’ system to earn a spot in the majors this season. He has speed and will produce a lot of doubles and, as he gets older and stronger, probably be an average home run hitter. I have him in several of my leagues, so if I were you, I’d grab him immediately as he will be a stud.

Larnach had a great junior year at Oregon State, but since then he has not lived up to expectations – at least not up to mine. I have him in my minors in several leagues as I expected him to be a stud. But his strikeout rate is worrisome. If you are rebuilding, he is certainly worth taking a chance on. For a former first round pick, he is unfortunately an average player who matches what tons of other outfielders are doing. That currently makes him a dud.

thanks for this, timing was perfect. ashby just got dropped in my league, and eovoldi just hit my IL to open up a roster spot.

Could be tons of worse talent to have to add to replace Eovaldi. Ashby is a great add at this point.