Welcome back to another edition of Top Dynasty Keepers.

The final month of the regular season is just around the corner, meaning one of two things – you are gearing up for a playoff run or you are trying to figure out who should and shouldn’t be on your fantasy team next season.

Hopefully, you are in the category of owners gearing up for a playoff run. But if you are in the other category, here’s the simplest way to become a contender next season – hoard as many Atlanta Braves players as possible.

Major League Baseball is bursting with young, talented players. But it seems the Atlanta Braves are leading the pack when it comes having that talent currently playing on the major league level.

Already this season I have featured Michael Harris III and Vaughn Grissom, both of whom are only 21. But the Braves also have Matt Olson and Dansby Swanson, who are both only 28, to go along with 25-year-olds Ozzie Albies and Austin Riley or 24-year-old Ronald Acuna Jr.

That is just the offense. The starting rotation is loaded with young talent as well. Mike Soroka is on the 60-day IL, but he is only 24 and was the staff ace last year during the team’s World Series run. Max Fried is 28, Kyle Wright 26 and Ian Anderson is only 24.

And now comes along Spencer Strider. He has seemingly come out of nowhere to become another young stud on a team filled to the brim with them. Strider was pitching in college only two years ago. Today he is arguably the best starter for the Braves.

Let’s dive into Strider and his rise to prominence this season.

After missing the 2019 season due to Tommy John surgery, Strider returned to the mound in 2020 and made four starts for Clemson before COVID shut everything down. In those four starts, he had a 4.50 ERA and 1.33 WHIP but again had a great 14.3 K/9 rate thanks to a 95 mph fastball. That was enough for Atlanta to draft him in the fourth round and send him to their alternate training site.

If you blinked, you may not have even known Strider was on your local minor league team. The right-hander started the 2021 season in Class A and found himself pitching on every level in the Atlanta organization, including two games out of the pen for the Braves.

From the Pen to the Rotation

Strider earned a spot in the bullpen when the team broke camp this spring and was an instant weapon. In 11 appearances out of the pen, he struck out 37 hitters in 24.1 innings of work, a K/9 rate of 15.6. Strider was still struggling to find the zone at times, issuing 11 walks in 24.1 innings (4.1 BB/9), but opposing hitters couldn’t get enough hits to make those walks hurt.

With Atlanta searching for a consistent fifth starter, the Braves inserted Strider into the rotation on May 30. All he has done since then is establish himself as a dominant starter and of the leading candidates to be Rookie of the Year. He’s gone 7-2 as a starter and has maintained the same 1.03 WHIP he had when he was in the pen.

Yes, his strikeout rate is lower, but only because he is pacing himself as a starter. His 13.2 K/9 rate is still amazing. Probably even more important is the fact that, as a starter, he is walking fewer hitters, allowing less than three walks per nine innings. 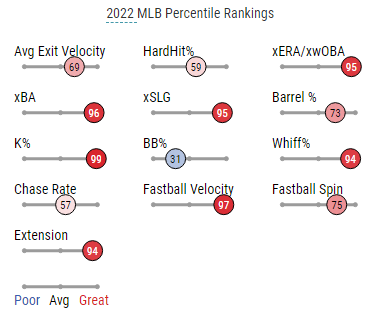 As they say, pictures can be worth a thousand words. When it comes to Strider, that picture shows that he is simply dominant on the mound this year. His percentile ranks are basically all light to dark red with the only blemish being his overall walk rate.

Separating him from other pitchers is his dominating one-two punch of his fastball and slider. The fastball averages 98.2 mph and he throws to all quadrants of the strike zone. But thanks to his high spin rate, it can sit at the top of the strike zone to help him rack up the strikeouts.

But when you are sitting on the fastball, he will break out a wicked slider. How tough is his slider on opposing hitters? Glad you asked. Thanks to the 35.6 inches of drop and 5.3 inches of horizontal movement he gets on the pitch, he has a jaw-dropping 52.8% whiff rate. The slider is a pitch that was decent last year. But Strider has added more than 200 rpm to the pitch this season, making it nearly untouchable as opponents are hitting .151 against the slider.

The last thing opposing hitters need to see from Strider is a third above-average pitch.

Yet that is what they are starting to see. Not wanting to be a two-pitch starter, Strider has shown a changeup that is keeping hitters completely off balance. Coming in an average of 10 mph slower than his 4-seam fastball, opponents are hitting only .056 against it with a whiff% of 47.1.

Strider is proof that you can’t rely solely on top 100 rankings when it comes to building your dynasty team. He was nowhere to be found in the many top 100 prospects rankings entering the season. Last year MLB.com had him ranked as the team’s seventh best prospect.

Now he is part of a rotation that is carrying the Braves to another playoff appearance and likely a deep run. Morton is the seasoned veteran and Wright, who has been on the radar of fantasy owners for years, is finally having the breakout season many have been waiting for. But it is Strider who may have the best stuff of anyone on the staff.

The Tommy John surgery is now a distant memory and when you watch him throw, his fastball is generated with ease thanks to a short, compact motion.

If you have him on your team, there is no question he should be on your team next season. If you don’t have him, try to trade for him. Strider may have come “out of nowhere,” but he is here to stay.

I’m evaluating my keeper options and wondering if you can estimate the auction value of these players in a 5×5 yahoo league?

Not an easy chore, but I’ll give it a go. Acuna, because of his name and ability to put up great numbers if he played an entire year would likely hit $35 or so.

Gaysman is a nice pitcher, but if he’s one of many on the market, I’m thinking around $10 but can see bidding hit $15 if supply and demand comes into affect.

Trade for Tatis- offer is Tatis, devin Williams, and Garcia for Clase and Wright? Do I go for it?

You are getting Tatis? Yes, I do that. He’s a mess right now, but still a massive talent. Then you also get Williams and Garcia – that is pretty solid.

If I’m reading this wrong, and you’re giving up Tatis, then no. Keep him.

Is carpenter keepable at $10

Trying to either make a last push at break even 4th place. Have too many il guys so holding him prevents me from some streams

Tough choice. Push me off a ledge ?

He’s hurt now, so not helping you and at his price, I wouldn’t keep him. He’s not going to go for that much next season as a free agent, in my opinion, so he’d cost you more than he’s going g to be worth.

Drop him and stream away.