Scott Boras got Shin-Soo Choo his Christmas present after all.  A $130 million contract to play for the Texas Rangers of the American League West.  The only stipulation of the contract was Choo will buy the island nation of Bora Bora and change its name to Boras Boras.  A small price to pay for Boras getting him the big bucks.  I wonder what Boras could do for me.  Maybe one-point-two million dollars per page view?  A five hundred thousand bonus for every waxed mustache hair?  A stipend to feed the monkeys that type up these posts?  Ling-Ling wants a banana!  (On side side note, my friend from Frazers’ Edge provided the comic at the bottom of the post.)  Wikipedia tells me Dallas has the 2nd largest Korean population in the southern United States.  Shin-Soo Choo blushes at the thought.  Or maybe he’s just been drinking.  This doesn’t do a whole lot for his fantasy value.  He was already in a great park atop a terrific lineup.  He’s really an odd duck because he’s so damn consistent yet has such dramatic splits.  He regularly bats .320+ vs. righties and barely .200 vs. lefties.  If he has a bad year vs. righties, he’ll be awful.  I’m not talking a .250 or lower year either.  I mean, a .280 year vs. righties would kill him.  Due to his splits, the tightrope he walks is thin but he’s managed to traverse it well thus far, so there’s no reason to think the end is nigh, not to mention no one has any idea what nigh means.  Is it really near?  It’s not saving letters by writing nigh.  Is there a nighby?  Who says that?  The bigger pickle Choo’s brined with this signing is Leonys Martin will be relegated to batting ninth for another year.  There’s no chance he bats 2nd or moves up in the order vs. lefties either because he’s just as bad as Choo vs. them.  For 2014, I’ll give Choo the line of 101/20/59/.277/20.  Anyway, here’s some more offseason moves for 2014 fantasy baseball:

Grant Balfour – As mentioned here after inferring shizz from other places, Balfour’s deal with the Orioles fell through due to a shoulder problem.  The Rays have made closers out of a lot less, so they’re now showing interest in Balfour.  Mean’s while, the Orioles are expressing interest in Fernando Rodney.  The Rays are giggling.  “You think he’s better than an injured Balfour?  You make me laugh, Balty-more.”  The Rays pronounce Baltimore weird.

Kurt Suzuki – Signed with the Twins.  I don’t know why the Twins didn’t just go with Josmil Pinto.  Pinto had shown power in the minors.  Or as a Puerto Rican would say, Pinto beans good in the minors.  Yet, the Twins decided to go with a guy that gives absolutely nothing, aside from clubhouse chemistry.  Hire a stripper for the clubhouse and promote Josmil!

Casey McGehee – There’s a name from the past, huh?  No, Casey McGehee isn’t the girl you went to the prom with.  He’s a third baseman who used to play in the majors, couldn’t hit and went to Japan, where he found success against guys half his size.  Some people call that a bully, but in the US we call that industrious.  You might wonder why on earth we’re talking about a guy who has disappeared for a year.  Guess what?  The Marlins signed him to play third base.  And you thought the Marlins weren’t playing to win.  Pee double eff tee. 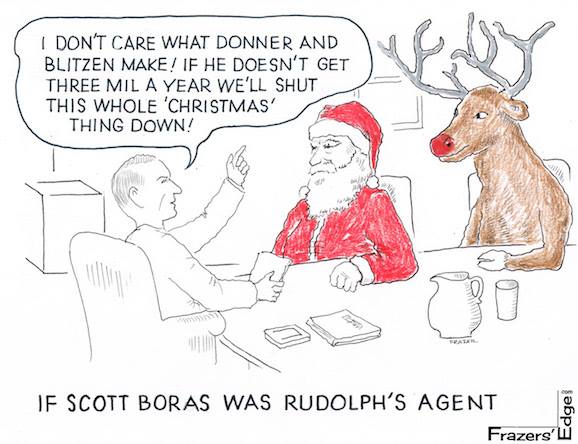