Mauledbypandas has a 2.5-point lead entering the final week of the season. It’s still a wide open battle, with 10 teams within 5-and-a-half points of  Josh Hamilton’s Fake Stache. Hope you have the right moves left in you! Should be a fun week. Good luck, everyone!

Check out the Master Standings (you can also access them via the Leagues menu up top) to see where your team ranks in comparison to the other 767 teams through Sunday. The page now includes sortable stats. 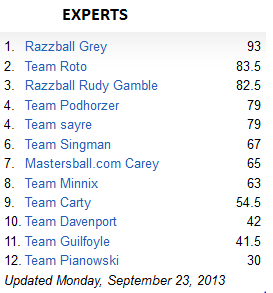 Grey stretched his lead to 9.5 and looks to coast to victory. The only question now is whether or not Rudy can make it a 1-2 Razzball sweep. Rudy had a great week on the mound with 5 wins, 6 saves, a 2.10 ERA, and 88 strikeouts in only 64 1/3 innings. Grey led the league in runs (44) and steals (11).You can find all Expert League unofficial Week 25 stats here.

League Competitive Index: As the season winds down, the gap between the best leagues and the rest widens as participation wanes in many leagues. The ECFBL now have an LCI of 109 as they are catching up in Games Started and battling to the end. Random Italicized Voice’s effort to start a Champions League has proved successful, as they are #2 at 106. RIV’s other league, Cracking The WHIP is next with 105.

Myrtle’s Acres: Still 4 teams in the hunt with T Moore’s abandoned team affecting the outcome as they fail to reach the IP minimum. A Man Named Brady will gain 2 points when Team MAGPIES lose their pitching ratio points, while Team SQUINTS will add one point.

Some other close battles:

Daily and full season stats are available, and in the fantasy baseball forums there are team and league of the day threads, as well as the top batting and pitching lines.