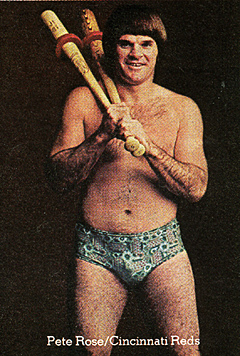 Pete Rose. He’s like an Energizer Bunny wrapped in a bad haircut inside a moral vacuum.

On one hand, Charlie Hustle.

On the other hand, Degenerate Hustler.

On one hand, All-Time Hit Leader.

On the other hand, All-Time Full of Shit Leader.

On one hand, he ran over Ray Fosse in an All-Star Game.

On the other hand, he ran over a drifter on his way to an Illegal Card Game (pure speculation).

If there was one place, though, that you wouldn’t expect to see Pete Rose – besides an event giving away free autographs – it would be in a series that celebrates historically awful fantasy baseball seasons. Click one more on the “Pete Rose Didn’t Live Up To My Expectations” counter…

1) 1963-1982 (20 seasons) – Pete Rose was like the Derek Jeter of his time except less fancy (see video below). 16 All-Star appearances, beloved in real baseball circles, just good to very good in fantasy baseball terms. Why? He couldn’t hit for power (high was 16) and he wasn’t an SB threat (high of 20 ). His two best fantasy baseball assets were average (13 times in NL top 10) and Runs (15 times in the NL top 10). While his OBP stats were also well above average, his OTB stats were consistently disappointing. He bounced around between 1B, 2B, 3B, and OF during these years with most of his time in the OF. Averaged 600+ AB despite walking at a good clip.

So let’s go back to 1983 – the year before Big Brother started watching us, the year of Michael Jackson ‘Thriller’ and the year Father Time did a piledriver on Pete Rose’s baseball stats.

Turning 42 and in his 4th year with the Phillies, Rose manned first base. While his lack of power (4 home runs in the previous 3 years) would seem to make him an odd choice for first base, there were several logical reasons why Phillie managers Pat Corrales and Paul Owens did this:

How bad was this season? He finished 3rd to last among all NL players (with 350+ AB) in SLG %. As a first baseman! (other two: shortstops Bill Russell and ex-Red teammate Davy Concepcion). Among starting NL 1B, he finished last or second to last in Runs, HR, RBI, and AVG. He was outhit by Phillie shortstop (and previous Razzball Historical Spotlight recipient) Ivan DeJesus for Christ’s sake (.254/.323/.336).

*** In fairness to Pete, he had a lot of bad luck in 1983. He only struck out 28 times so his average should’ve been in the .280 range with average BABIP luck. And if the outfield fence distances were as Asian-inspired as his haircut, he definitely would’ve netted at least a couple of home runs*** 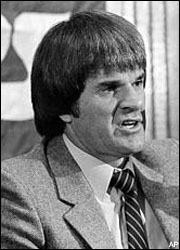 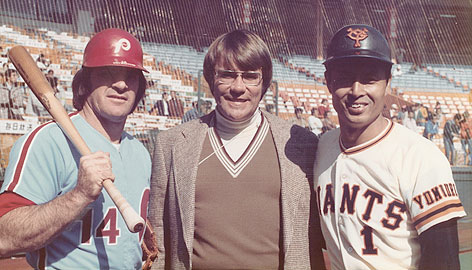 Even with Rose’s Razztastic season, the Phillies won the NL Pennant in 1983 led by Fantasy Baseball HOFer Mike Schmidt – proof that a bad moustache trumps a bad haircut. It was only in the World Series when Philly finally realized the error in their ways and replaced Rose with the much younger Tony Perez (41 at the time) for two of the 5 games. Alas, they lost to the Baltimore Orioles who somehow bested the Rose/DeJesus 1B/SS combination of the Phillies with Eddie Murray and Cal Ripken Jr. Honestly, Eddie Munster and Cal Ripken Sr. might have been enough…

Pete Rose stuck around for a couple of years – partly for the competition and partly to cement the all-time record in Outs. In the process, he also set records in Games, At-Bats and Hits. After his playing career ended, he became a radio personality, fathered a surprisingly attractive daughter (yeah, that’s his daughter), and made a few poor decisions along the way.

Pete Rose. You may not be allowed in the MLB Hall of Fame but you’re in the Razzball Hall of Fame (whether you like it or not).

one of the things that i like about this site is the ease to which past articles can be accessed .
i am re-reading this article for perhaps the 3rd time since coming onto your site .
@ rudy …. this was very humorously presented , and i’ll probably read it a few more times , when all is said and done.
@ rudy & grey …. does it freak you out that there may be more than one person who re-reads your articles ?

pressure’s on , boys , at least from where i’m sitting .

@Lou – I’ve seen that Ted Simmons line. Perhaps one for a future Razzball Spotlight. Interesting question whether this was the worst year ever for a HOF-caliber player. It has to be the worst in recent memory…

hilarious piece! he must have been betting AGAINST the reds in ’83. sure bet.

Is this the worst by a Hall of Famer (lets bend the HOF rules, his caliber of play was easily of HOF quality obviously)?

By the way, FBHOF ratings confirm this booty season. He was the worst player with 1b or OF eligibility in 1983 (for those who amassed 450 or more AB). And a quick scan of those worse than him (from 1980) on is filled with players like Corey Patterson, Scott Hatteberg, Bill Buckner, etc.