This week, the best third basemen are identified and elected.

Despite having well over 1,000 of his games ineligible since they came prior to the ‘fantasy era’, Mike Schmidt is inducted as the games premier third basemen amassing a final FBHOF score of 70.5 and a Peak Score of 67.7, both tops at his position.

The strike shortened 1981 season was his trademark campaign, one in which he scored 18.8 FBHOF points, the second best total for any batter of all time.  In just 102 games Schmidt batted .316, 78 R, 31 HR, 91 RBI en route to the number one overall ranking, far ahead of the second place finisher, Andre Dawson.  In his previous season the lifetime Philly finished 1st at his position (2nd overall), a feat he duplicated again in 1984.

In the eight seasons between 1980 and 1987, Schmidt reached the 30-HR milestone each year, topping out at 48 in 1981.  He also drove in at least 85 runners each year, and scored the same in seven of those eight seasons.  Early in the decade Schmidt also stole double digit bases which increased his value considerably.  In these prime years he ranked 1st overall in home runs (295, second best was Dale Murphy at 264) and RBI (839), and 5th in Runs Scored.  All in all, he was the best fantasy batter of the period, and not just the best fantasy third basemen.

As good as Schmidt was, our next inductee Paul Molitor was more valuable over the long-haul, out distancing Schmidt by almost 50% in career score, 140.6 to 94.8.  Of course, a lot of this has to do with Schmidt’s 1970’s seasons not counting, but plenty had to do with Molitor himself.  He too lost seasons to the 70s’ (one very good, one not) but more importantly, Molitor finished 1st at his position 5 times, an accomplishment only bettered by Albert Pujols and Alex Rodriguez.

Positional eligibility impacts the scoring as well.  Three of Molitor’s top five scores happen to be seasons where Molitor was playing First Base (from 1992 -1993).  In fact, aside from 3B/1B, Molitor also had two seasons where he was eligible at second base and five where he was eligible only as a DH.  In all though, he had more seasons at third than any other and therefore is considered a third basemen for induction purposes.

At his best, Molitor delivered his fantasy owners a brilliant combination of speed, power, and high averages.  Remembering the relatively low run scoring environment he was active in, his average peak year batting line was:  .325, 119 R, 17 HR, 84 RBI, 32 SB.

Our last inductee for the hot corner helps speak to how baseball has changed through the years.   In 1999 Chipper Jones had the following line:  .319 AVG, 116 R, 45 HR, 110 RBI, 25 SB.  Despite these monstrous numbers he wasn’t the most valuable fantasy batter during year, as that distinction went to Larry Walker.  Nor was he the 2nd or 3rd most valuable thanks to superb seasons from Jeff Bagwell and Manny Ramirez.  Jones had to ‘settle’ for 4th because the era in which he played in favored hitters to a extensive degree, so much so that in 1999 the NL average OPS was .771, which at the time was the 3rd highest on record since 1900.

This has been the story of Jones career.  In ’98 he went .313, 123 R, 34 HR, 107 RBI, 16 SB but was only ranked 8th overall.  In 2000 he had virtually the same season, but dropped to 10th.  Jones has never been ranked better than 4th overall in any one season, a fact that reduces his value when comparing him to Schmidt and Molitor.  In his favor however, is that among his peers he had no equal in his prime years of 1996-2001.  During this six-year stretch Jones is ranked, on average, more than four and a half times better as the next best third basemen.  There were 33 players eligible at third base in this time frame, below are the average rankings for the top 5:

No player bested him twice in the years he wasn’t ranked number at the position.  He truly was in a class all by himself.  His 61.2 FBHOF point total and 61.2 Peak Score is 3rd best of his peers, while his Career Score is 2nd best.

A few players missed the cut:
– George Brett – The Kansas City Hall of Famer is one great season away from election.  His top 5 seasons listed by rank among third basemen are 1, 2, 2, 4, 5 with the last two also being outside of the top 20-overall.  Can we elect a player who didn’t have 5 top 20 seasons when his FBHOF peers all have?  It’s a shame, but he doesn’t quite make the cut.  (Brett also lost 6 seasons to the 70’s and would have easily been elected had these years been considered).  One possible way to induct him is to give the guy a 3 point bonus for his anger management issues.

– Wade Boggs – Another Hall of Famer misses the cut as well, which in all likelihood will be a common theme at FBHOF.  Boggs isn’t all that close to warranting a vote in, and while I don’t want to call any immortal one dimensional, that’s just what Boggs was for most of his career.  He reached the 80 RBI mark just once, had double digit home runs just twice, and never stole more than 3 bases in a season.  Even his hallmark 1987 campaign (.363, 108/24/89) came in a huge offensive season, making it just 20th best among batters.

– Pedro Guerrero – Surprisingly, to me anyway, Guerrero is in the same exact boat as Brett, just 1 season away from serious consideration.

– Matt Williams – Has more 10 point seasons than either Brett or Guerrero, but never had a truly elite season.

– Scott Rolen/Bobby Bonilla/Vinny Castilla – Each had two or three great years; five are required unless one of those years happens to be an all time great. 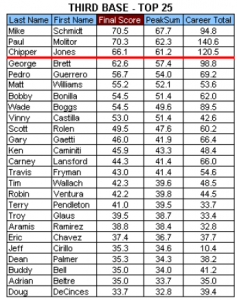