The inaugural Razzball season has ended and – in a fitting conclusion – the two representatives from this blog finished 1-2 (Contributor Lou Poulas finished last but that’s because he’s too focused on all-stars).  The final score:  Rudy – 96, Grey – 94

(Quick aside for those who haven’t been following.  Based on rules of our own invention, we played a full fantasy season where the goal was to field the worst team possible (click here for the genesis of it).  While I had some doubts going into it, I’ve got to say that I had more fun in this league than my expert leagues and my cash league combined.  Who knew rooting against players could be so fun?)

The season went down to the last day when Rudy’s team gained an extra point in ABs from tough competitor Aardvark Trading Co (5,238 to 5,220) and Grey lost a point after his crappy pitchers managed to best the staff of Mop Up Duty 772 to 770 Ks.  Both teams set records that will be tough to duplicate in future years:

Fantasy Baseball Generals finished a strong 3rd at 86.5 points, led by an amazing pitching staff that managed to lose 112 games and give up 226 HRs (both league highs) and finish 2nd to Grey in both ERA (5.25) and WHIP (1.51).  After a slow start, Mike P. of the FBG put together as awful a team as any.

4th place went to Aardvark Trading Co – the holding company for the Cards In The Attic blog.  They were one of only 3 teams that had the intestinal fortitude to reach the 5200 AB minimum (failure to reach that mark meant pro-rated 120/35/120/.320 stats).  His solidly crappy offense was let down by a merely incompetent pitching staff.

Herb Urban finished in 5th displaying a keen affection for Dave Kingman as he finished with the 2nd most HRs (that’s bad) but 2nd most Ks and 2nd lowest average (both good).

See below for the final standings.  Stay tuned for posts that will contain the final rosters/stats as well as a final season Point Shares to determine who was the most ‘invaluable’ player in the majors this year… 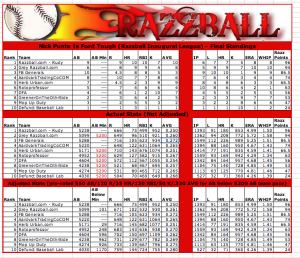