You ever play Marco Polo? Marcooooo, you bellow out. Listen intently. Pooolllooooooo is the response. Move to where you think sound came from. Marcooooo, you yell out again. Listen more intently. Pooollloooooooooo. Each Marco with the subsequent Polo response should get you closer to tagging the idiot yelling Polo. For the non-swimmers chilling in the cabana poolside with the quizzical looks, the Hot and Cold game is more your speed. Get closer to the object in question, a Hot response is elicited. Mover further away and you get Cold. According to NFBC ADP data from January 1, 2020 to Februrary 3, 2020, Khris Davis is receiving the Cold response, as he is the 177th overall player being drafted on average. There is no Polo to Marco when it comes to Davis this season, but are the fantasy goodies dangling right in front of our faces? When Kross told Kris to warm it up and Kris responsed with, “I’m about to. ‘Cause that’s what I was born to do,” can we expect the same from Khris?

After batting .247 for four consecutive seasons, Davis hit only .220 last year. The OBP was sub-.300 for the first times since 2014 and the ISO cratered to .166, the first time under .200 since….*crickets*……Double-A ball back in 2011. The swinging strike rate was a career-high 16.8% and the HR/FB rate was the lowest since entering the bigs. Davis used to obliterate fastballs, yet the pitch was the most effective against him since? Yes, you are good grasshoppers if you said in forever ever. Same goes for the slider. Vince Lombardi just traveled through time to ask me, “What the hell is going on out there?”

Davis opened last season strong, hitting four homers in the first six games. Then the month of April arrived, and the only showers were from the tears of his many owners. The SLG plummeted  to .421. For context, he posted a +.500 number in the four prior seasons. Now, Davis can be streaky, so this wasn’t a sky-is-falling moment. On May 5th, 2019, though, Davis ventured into foul territory to make a terrific catch. Unfortunately, he banged his side into the wall and had to leave with what was diagnosed as a left hip contusion. And then the sky began to fall.

For the rest of that month, he was on and off the injury report with the hip issue and eventually missed 12 games. The hips are important for generating torque and power, so it’s not a surprise that during the month of June, the SLG remained at .406. Shakira and fantasy nerds can unite in saying that hips don’t lie. Then the Dim Mak was delivered.

On June 27th, 2019, Davis was hit in the hand by a pitch. In July, the SLG was .233 while it was .271 in August. As he told Susan Slusser of the San Francisco Chronicle, “It’s not just as strong as it should be. I’ve been choking up a little bit, and that’s been helping a little, but not a lot of power guys choke up.”

By all accounts, Davis is healthy and should return to his mashing ways. Even if he doesn’t, the risk/reward ratio is very favorable. Pick 177/40+ homers. Warm it up, Khris! ‘Cause I’m about to draft you. 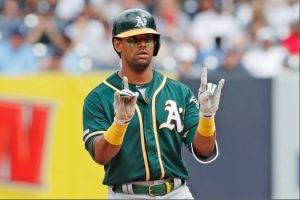