First off, shoutout to frequent commenter, Fausto, who commented about David Peterson and his sleeper-iness last September, and I screenshot it back then, and it’s been sitting on my desktop since then. Every couple weeks Cougs would say to me something like, “Did you order Daniel Vogelbach-in-a-bikini coasters? And if so, can you locate the receipt so we can write them off?” Then I’d go through all my screenshots on my desktop that act as receipts, and I’d come across the David Peterson screenshot comment. Without further ado, here’s what Fausto said: 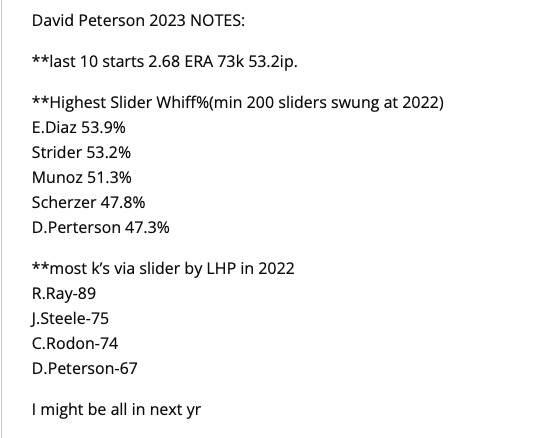 Then, as you all know, the Mets went out and grabbed a few starters this offseason, and pushed Peterson to the pen, for at least now. That’s okay, because a few times I looked at that comment, and I was like, hand under chin, elbow on the desk, “Tell me more about this Justin Steele guy.” Justin Steele’s season stats last year: 4-7 (hehe)/3.18/1.35/126 in 119 IP as a 26-year-old, who turned 27 in July, when things really started to click. His 36 2/3 IP in the 2nd half yielded a 0.98 ERA. Oh…*climbs to the top of Mt. Kilimanjaro*…kay. Listen, I’m all for the decriminalization of drugs, and, if you wanna take peyote, then go for it, but has someone slipped me peyote or was Justin Steele’s 2nd half ERA really 0.98? It was? Oh, boy. Looking at Pitch Values alone on the slider, Steele was actually better than Spencer Strider, Rodon, Ray, and, well, a bunch of guys. He had the 13th best slider in baseball. One final note about that screenshot, Justin Steele was listed as the 2nd most strikeouts on a slider by a lefty, but that was only through August as he didn’t pitch in September. The top five ended up being: Robbie Ray, Rodon, Peterson, Kershaw and Steele. As you can see, Steele’s the man. Faster than a speeding bullet, yadda. So, what can we expect from Justin Steele for 2023 fantasy baseball and what makes him a sleeper?

Psyche! Before we get into the Justin Steele sleeper post, just wanted to announce that I’ve begun to roll out my 2023 fantasy baseball rankings on our Patreon. Lucky you (if you pay the $10/month). Also, Rudy’s begun to roll out his 2023 fantasy baseball projections. It’s version 1.0 and there’s usually about 4500 versions but just wanted to let you know. Anyway II, the Justin Steele sleeper:

Here’s Justin Steele sliders that produced an out: 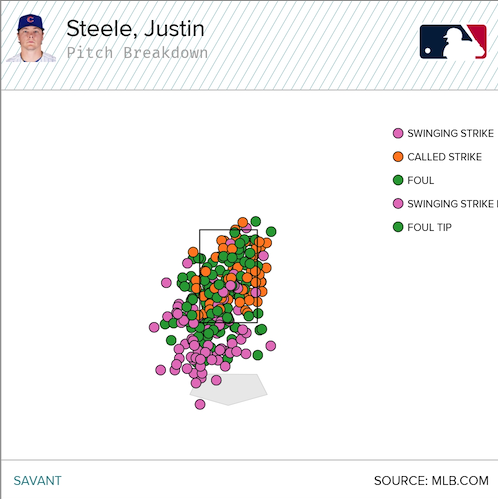 Here’s the sliders that produced a hit or walk: 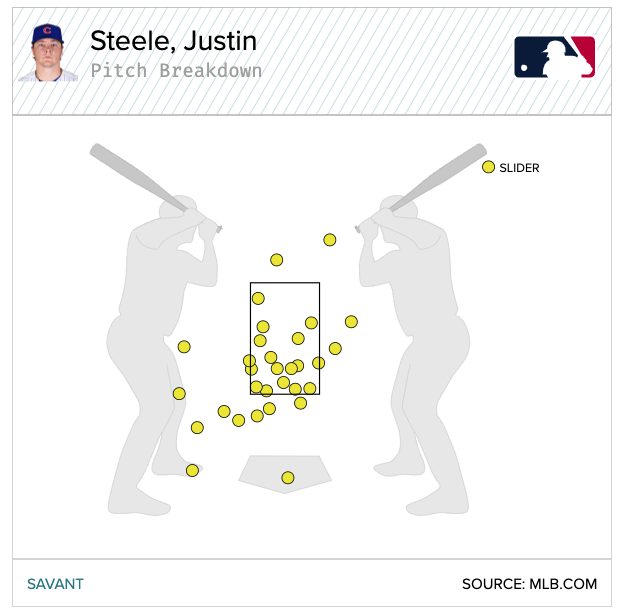 That made me laugh (super nerdy stuff!) how many sliders dominated hitters vs. how many sliders produced a less than ideal result. There’s so few, you can count them in the 2nd image. It’s 31. 598 sliders produced positive results. His batting average against on the slider was .136. That’s like your aunt when Beanie Babies were popular — just absolutely nuts. His Whiff% on the slider was 32.7%, and used it to put away the batter 24.5% of the time. Okay, the slider’s great! You hear it, I hear it, what else can we hear? (That sounds like someone misquoting the musical, Tommy.)

Justin Steele’s curveball was thrown 56 times and it produced a .000 batting average against. That seems good. That’s not a matter of me stopping at three digits. I can go to the millionth decimal and it’s still zero. His change produced a BAA of .167. Only 37 times thrown, but combined the curve and change and that’s 93 times thrown with insane numbers. Side note: I’m bouncing between FanGraphs and Statcast, so if you go to look at FanGraphs and it says he threw the curve 59 times (it does), and still had a .000 BAA, then that’s because these sites can’t get on the same page about basic stats. Not going on that diatribe again, but it’s annoying and just assume I saw the number I’m quoting at one of the places. To be fair, these curves and changes might be mislabeled at both places and could be sliders. I watched a few videos of his curves and they kinda look like sliders, but it’s irrelevant. They produced good results, that’s all that matters.

So, what didn’t produce good results? The 4-seamer appears to be merely a set-up pitch. It’s not quite garbage, but with a .313 BAA, and only a 20.3% Whiff%, it was not working last year, or close to as well it was working the year before, when he had an overall iffy year, but the fastball had a .227 BAA during that iffy year. This is where the dream-a-little-dream shizz comes into play. If he can couple that fastball effectiveness with his last year slider? Well, I think we could have a fantasy number two. I haven’t even mentioned his opponents are mostly bad, even if the unbalanced schedule got more balanced.

Our Lg just added K-BB as a stat and combined Holds with Saves. So the 6 cats are ERA, Whip, k-bb, QS, SV/Holds, K

With saves and holds now together, does that de value closers a bit? What would be your strategy going forward?

Any thoughts on my Last two keepers?

When’s that first Top 10 article going to drop? To me, the unofficial start of fantasy baseball season.

Another hand grabbing my shoulder shaking me out of a deep slumber. Had very little interest in Steele but 0.98 in 2nd half! Yes please, thanks!

Morning Grey. Great piece on Steele. I noticed that Witt is going really high in NFBC rankings. Would you take him or Bichette in standard roto 5×5? Thanks. Enjoy the day.

Thanks Grey! 3 trade questions for you

Love your sleepers, I always load up on them every year and they rarely disappoint.

Question for you – I am a Patreon supporter, so I do know what your early rankings look like for 2023. However, my question is about your thoughts for 2023 and beyond in a Dynasty/Keeper league.

League is 8 keepers, I have 4 no brainer offensive keepers. Which 4 pitchers would you keep out of this list? (Numbers are draft rounds that the players are kept in, and the rounds get more expensive each subsequent year that they are kept).

Thank you as always!

Yeah I mean everyone has misses (can’t account for injuries), but with a guy going this late it’s hardly a “miss” since he is basically free.

But Grey has a strong track record for sure with these sleepers really popping off so I follow his sleepers religiously for my dart throws/upside plays.

Not sure I’d pick out Justin Steele on my own without Grey’s urging.

Haha kelenic can still make it!

The balanced schedule has me doing a double take on the Central division pitchers. No longer do they get the added bonus of extra games in pitcher parks vs shitty offenses. That has got to tick the ratios up a bit.

Yeah, maybe, but there’s also hitters being less familiar with a pitcher

Someone is asking for Judge + Varsho for ONE of Manoah, Verlander, Rodon, all priced at $13, or Cortes priced at $8.

First: Manoah > Verlander > Rodon > Cortes? Does cheaper Cortes bump him up over any of the other three?

Second: Any of those guys a good deal? I think Manoah is a no doubt good deal, but unsure of the other three.

Thanks and happy new year (late, but I haven’t been around!)

perfect thank you. Is a 1 for 1 an good option if I can get them to back off both of them? Either or good deal? One of them better than the other? would you do both or neither?

Me likey Steele. But damnit..he’s rising quickly up NFBC DC ADP. Up to Thanksgiving, he was going below 300. He’s at 280 over the last month. Still think he’s a solid value there. Another 20+ spot rise tho and The Cobblers are likely out.

Ha, thanks! I could see that at NFBC, but I bet he’s barely ranked by Yahoo and ESPN, so definitely cheap there

You’re right as usual!! I was just gonna reply same to my comment above regarding other sites. And in 12-teamers, he’s a decent late round addition even if he’s higher up the ranks.

With the news on Hendriks, that’s only going to push up the known top flight closers even more, ya?

In a 10-team league with 12 keepers each, I was considering tossing back Hader but really thinking he could be a no doubter now, if he wasn’t already.

Varsho and Hader — if you wanna go Grayson and Hader, I wouldn’t hate it

I was definitely considering Varsho as well. The knock against him is that, unless TOR moves Jansen, he’ll likely not have C eligibility after this season. Could potentially move him in a deal for picks though…

Ah, I see…Well, depends on how many games he needs, but Jansen will need to sit at least 40 games this year, and Varsho could see games behind plate

ESPN, so 20 appearances to carry over to next season

Grey I hate being this guy, but in a dynasty, what would you do with Liam Hendricks given the news we just got on him? If he does some how play this year, is he even the closer when back? Feels like something he would be eased into.

Cant wait till Feb. rolls around and we start really getting excited for next year.

Thanks as always, Grey!

Oh, I doubt he plays this year…White Sox said they’re not even giving info on him until Opening Day

Steele’s great – I picked him up in June and he helped me make a really improbably comeback to cash in one league.

Could use some opinions on a couple trade offers. Keeper league, $260 budget, players keepable forever at $5 salary increase each year, minor leaguers cost $0 until after their rookie year:

To me–if you can afford salaries of Turner/Rodon, thats the side i like
AS mentioned above–with Hendricks out , dedicated closers are less and less–i keep Clase, at a very good salary

a. Yet another gem! Where do you get your Intel!!! Seriously, great stuff.

b. Prepping for my Feb 5 draft in that weird (but challenging) points league. No questions yet.

Ha, thanks! Hope you had a nice weekend!

Hope you had a nice weekend too. Our son got back from his ski trip on Saturday night. He’s in his last semester of senior HS (aka my wife and I are also in our last semester of having to wake up at 05h30).