I was really pleased with how last week played out. Bailey Ober was the only guy who struggled, and it sounds like he wasn’t available in your leagues anyway. On the hitting side, Eric Hosmer was one of our best streamers of the season. Unfortunately, Miguel Sano went into hiding on the Twins bench while Aaron Hicks went on paternity leave. I guess we need to pay more attention to when these guys will have babies! In any case, the process has been on point, and we’re going to keep grinding away this week!

Michael Lorenzen, LAA (vs. WAS)

I’ve always been a big fan of Lorenzen because he could rake and throw gas out of the bullpen, but he’s been a sneaky starter for the Angels. The 30-year-old has a 2.93 ERA and 0.98 WHIP so far this season. The only dud was a rough game against Houston, but that’s common for most streamers anyway. We’re talking about a guy with a 3.42 xERA and .273 wOBA, so it’s clear that these numbers are legit. The biggest reason we love him is this matchup with Washington. The Nationals rank 26th in wOBA, 24th in runs per game, and 27th in OPS.

Man, I don’t want to get burned by Paddack again, but he’s sucking me in. The Twins made a big splash by acquiring him before the season started, and he’s rewarded them with a 3.68 ERA and 1.16 WHIP. We’ve seen flashes of that throughout most of his career, with Paddack providing a 1.13 WHIP. That makes it hard to understand why everyone has given up on a 26-year-old prospect, particularly in a pristine matchup like this. Oakland ranks 25th in OPS and 28th in OBP and might have the worst lineup based on talent alone. Not to mention, Paddack is likely to enter this matchup as a -160 favorite in such a tasty matchup. 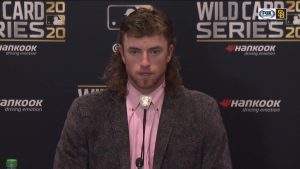 I just watched Hernandez battle his way through a start with the Mariners, but it was impressive to watch him allow three runs in the second inning and go nearly perfect across his closing three innings. That earned him the win but unfortunately brought his ERA to 5.87. That doesn’t tell the whole story, though, with Elieser generating a 3.84 xERA for the season and a 1.21 WHIP since the opener. That’s more indicative of the stud we saw in the minors, and we believe he’s one of the best streamers in this sensational matchup. Arizona’s lineup is atrocious, sitting 27th in OBP, 29th in OPS, and 28th in wOBA. This is The Streamonator’s favorite play of the week, too, projecting Elie to provide $13.5 worth of value.

Using pitchers against Cincinnati is a cheat code right now. That team has just three wins, and we’re nearly in May! The Reds rank dead-last in OPS and xwOBA while sitting 26th in runs scored and OBP. All of that has them as the best matchup in fantasy right now, which makes Ashby a worthy risk. The talented lefty has a 2.65 ERA for the season, after generating a 1.17 WHIP last year. His 1.53 WHIP this season is nothing to write home about, but we don’t anticipate him walking so many people in such a good matchup. He’s actually allowed only 10 hits over his last three starts, doing that damage across 15.1 innings. As long as Ashby limits contact like that, his 100 Ks across 63 innings at Triple-A last season makes him one of the most intriguing streamers of the week.

Pineda has been in this article a ton over recent years, and he’s obviously in play against a putrid Pittsburgh offense.

Kuhl has been the Rockies best pitcher this season, totaling a 1.10 ERA and 0.92 WHIP through three starts. We don’t expect him to maintain those absurd averages but facing Arizona makes it easier.

Houser just threw six shutout innings on Friday and could duplicate that against a crappy Cincy lineup.

Kepler was in and out of the lineup at the beginning of the season, but he’s recaptured an everyday role recently. His form is a significant reason why, with Kepler collecting a .333 AVG, .440 OBP, .810 SLG, and 1.250 OPS over his last six games. That stellar run has moved him up in the order, typically batting fifth against right-handers. His splits make that easy to understand why, with Max maintaining a .230 ISO, .471 SLG, and .810 OPS against righties throughout his career. He gets to face some terrible ones this week, facing Tyler Wells, Kyle Bradish, Spenser Watkins, Daulton Jefferies, and Paul Blackburn. Five good matchups with the platoon advantage in his favor makes Kepler one of the best streamers of the week!

Beer displayed some unbelievable power in the minors, and he’s starting to show some of that at this level. The namesake now has a .292 AVG, .395 OBP, and .841 OPS in 76 at-bats for Arizona. He had a .392 OBP, .509 SLG, and .901 OPS at the minors and should continue to develop as one of the best power bats for this subpar lineup. The reason we like him this week is that he gets to face four righties. We believe this guy is going to be owned in every league by the end of the season, and this could be the start of it against some weak pitching staffs like the Marlins and Rockies.

Choi has been one of the most underrated streamers over the last decade. The clobbering Korean has a .378 OBP and .840 OPS against righties since 2019. His career averages are on par with that, and it consistently earns Choi a prominent spot in this lineup. That’s big news with their schedule this week, with Tampa expected to match up with five righties. Some of those include Chris Flexen, Adam Oller, and Paul Blackburn, making Choi a solid stream.

Somebody on Oakland needs to hit. It looks like Neuse will be that sneaky bat, generating a .328 AVG, .388 OBP, and .814 OPS through the first three weeks of the season. He’s done most of that damage recently, tallying a .368 AVG and .862 OPS over the last 10 games. The raking has moved Neuse up in the A’s lineup, and we haven’t even discussed that he has three steals as well. That power-speed combo is tough to find from a guy who’s 90 percent available, especially since Neuse has some nice matchups this week. Not only does he gets seven games, but he faces five pitchers who are available in almost every league out there. 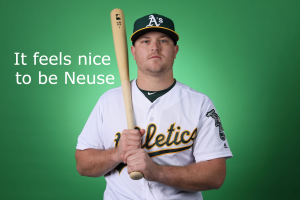 Syndergaard getting two starts this week @ BOS, v WAS? Looking at the Angels schedule, they have him starting next Monday v TB, but there’s no one scheduled to pitch on Friday v WAS. Would Maddon just moving everyone up a day?

It’s tough so say. Rotations are extremely wacky. I guess they’ll just call someone up for Friday

Would you drop Mahle for one of those guys? I drafted him pretty high, but he seems unpitchable. I could grab any of those guys you listed besides Paddock, its a H2H league,

I’m in a H2H league, can only keep 8 SPs and 2RP’s. Must start 5 SP’s and a true closer. My 8SP’s are Gausman, Berrios, Peralta, Lauer, M.Kelly, Wood, Rasmussen and Mahle. Is it time to drop Mahle, open that spot for streamers, or hang on, keep him on my bench and hope he either gets traded, or pitches better. Wacha, Houser, Ashby, Elieser all available.

Yeah I still wouldn’t do it but it’s up to you. It’s your team and if you feel its the best play, go for it