This marks the final week before the All-Star break! That sounds crazy to say because it felt like the season just started a few weeks ago. It was actually the midpoint of the season on Friday for many teams, and it’s going to be an exciting second half. What’s got me even more enthused is the fact that our streamers have been rolling recently. We’ve had three solid weeks in a row, and I absolutely love this group of guys. I actually had 16 pitchers that I circled before preparing the article, and I tried my best to limit it down and take out some of the crappier options. With that in mind, let’s kick things off with our two-start guys!

The Padres have one of the best rotations in baseball, with The Weatherman filling out the backend of it. The sly southpaw is pitching to a 2.63 ERA and 1.11 WHIP this season, allowing four runs or fewer in all 15 appearances he’s made. That’s hard to believe, considering Weathers is widely available across numerous fantasy leagues. The only real concern with him is the lack of strikeouts (6.7 K/9) but getting peripherals like those in a two-start week is hard to overlook.

The matchups against Washington and Colorado are the icing on the cake, though. Let’s start by talking about my Rockies, who currently rank dead-last in OBP, OPS, xwOBA, and runs scored on the road this year. They’re actually being lapped in runs scored, barely cracking 2.5 per game. Washington isn’t scary either, with the Nationals ranked 26th in runs scored. They also just lost Kyle Schwarber to a hammy strain, and that makes Weathers even more attractive. There is a chance that Weathers makes just one of these starts, but he’s still a great option no matter what. 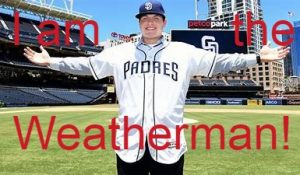 Davies couldn’t strike out a lineup of little leaguers, but this dude gets outs. He’s got a 3.14 ERA and 0.94 WHIP over his last five starts, despite allowing eight runs in one of them. That means he’s allowed four runs or fewer in 14 of his 17 starts this year, limiting the damage despite the lack of strikeouts. That may not sound special, but we love that Davies has a 0.65 HR/9 rate and a 46 percent groundball rate to limit some of that destruction.

One of the big reasons we believe he can keep his hot streak going is these matchups. Philadelphia currently ranks 24th in K rate, 21st in runs scored, 19th in OPS, and 20th in xwOBA. The Cardinals are even worse, sitting 29th in OBP, 28th in wOBA, and 27th in OPS. The best part about these matchups is the fact that Davies gets two home starts in Wrigley Field. That windy ballpark ranks 23rd in park factor this season and caters beautifully to a pitching artist like ZD.

We might have to change the Ride the Wave title to the Mike Minor + streamers article. This guy is seemingly in here every week, but people are just slow to pick him up. A big reason he’s sitting out there is his 5.23 ERA, but he’s been way better than that would indicate. In fact, he has a 4.12 xERA and a 4.21 FIP while providing a 1.29 WHIP and career-high K rate. It’s the last two starts that have really killed his numbers, with Minor accruing a 3.59 ERA, 1.08 WHIP, and 9.8 K/9 rate over his previous eight starts before those two duds.

The reason we can overlook those duds is that they were tough matchups in tough ballparks. That’s certainly not the case here, with Minor facing one terrible offense and one favorable one. We call Cincinnati favorable because most of their dangerous bats are lefties, giving Minor the platoon advantage from the southpaw side. The Cleveland matchup is why we love Minor, though, with the Indians sitting 28th in OBP, 21st in OPS, and 20th in runs scored. He actually has some of his best career numbers against this team, too, owning a 1.28 ERA and 0.86 WHIP in three starts against them.

The Diamondbacks are one of the worst teams I’ve ever seen, but it’s certainly no fault of Kelly’s. On the contrary, Merrill is in the midst of a breakout season. That’s on full display when you see that Kelly’s allowed four runs or fewer in 13 of his last 14 starts, totaling a 3.84 ERA, 1.19 WHIP, and 8.8 K/9 rate in that span. He’s actually gone to another level this month, collecting three wins in a row, thanks to a 1.80 ERA and 0.90 WHIP in that winning streak. The fact that he has three straight wins is an absolute miracle when you look at this team’s recent form, but it’s a testament to how good Kelly has been.

The matchup against the Rockies is obviously ravishing because we already discussed how bad they are on the road in the Weathers write-up. This happens to be the Streamonator’s favorite streamers of the week, too, projecting Kelly to provide $18.6 worth of value.

I check box scores every day and am always pleasantly surprised to see how well Allard pitches, but I was floored when I looked at his season-long numbers. The Texas lefty has a 3.46 ERA and 1.08 WHIP through 16 appearances this season, entering the starting rotation for his last six outings. He’s found some decent strikeout stuff as a starter, too, recording at least four in five of his first six starts, despite seeing limited innings in his first few. The main reason we love him here in this matchup, though. The Tigers have been featured heavily in this article all season, ranked bottom-five in runs scored, OBP, OPS, xwOBA, and K rate.

The Angels rotation has been a major struggle for this club for years, but it appears they found something with Sandoval. The left-hander got off to a rough start in his first four appearances but has been unstoppable since then. In fact, Sandy has a 3.31 ERA, 1.13 WHIP, and 9.9 K/9 rate over his last six starts, recording 29 Ks over his last four starts as well. That stretch actually started with these Mariners, when PS threw six two-run innings while striking out a career-high 10 batters. He set the MLB-high with a 29.7 swinging-strike rate in that amazing performance, and it’s a good indicator of how bad this lineup can be. In addition, Seattle sits 27th in K rate, 28th in xwOBA, and dead-last in OBP. The Streamonator agrees with our assessment, projecting him to provide $10.6 worth of value.

Anytime a Rockies starter gets two road starts, you have to keep them in the back of your mind. Gray has prevailed despite pitching in Colorado anyway, generating a 3.89 ERA and 1.24 WHIP.

Long has a 1.00 WHIP and an 8.6 K/9 rate through four starts this season and gets to face a Nationals team that just lost their most productive hitter.

This talented southpaw has broken out with a 3.64 ERA and 1.22 WHIP this season and gets to face one of the worst offenses in baseball here. He’s developed into one of the most consistent streamers out there,

Brubaker has been a regular in these articles, and he’s been brilliant outside of one ugly start in Atlanta. In fact, Bru has a 3.95 ERA and 1.11 WHIP in his other 14 starts and gets to face the lowest-scoring offense in baseball!