Tyler O’Neill (10-15% FAAB) is currently the most exciting outfield option for the St. Louis Cardinals. His combination of speed, power, and pedigree place him high on my list of fantasy prospects. There is an existing narrative that he strikes out too much for the big leagues. However, O’Neill dropped his K% down to 23.8% in AAA this season before his promotion this past week. This vast improvement is a sign from God for the fantasy baseball world. Still only 23-years-old, this bodybuilding outfielder looks to make the most of his debut. I am a firm believer in the talent this bat possesses, and he’s even stolen double-digit bases in the past. O’Neill is extremely athletic with the potential to blast off during these last few months. If your team needs some serious upside for a final push in the standings, here’s your guy.

Baltimore always seems to get one random player at the deadline that skyrockets in value by the end of the year. Last season it was Tim Beckham. I’m not saying Villar is about to take off, but a move to more consistency of role may be what this speedy 2nd baseman needed. He can still steal bases, 14:2 SB:CS and the 6 HR is not terrible considering how many balls he hits on the ground, 62% GB%. The batting average won’t kill your fantasy team, .266, plus the upside in power and speed can provide the late push necessary to overtake some teams in roto, or carry a couple of categories during a weekly head-to-head playoff.

Borucki is putting together an impressive debut. Despite a couple of games marred by walks, this young lefty combines a pretty sinker with a slider and changeup that break in opposite directions. His change fades arm-side and is used mostly to neutralize any possible platoon splits. The slider gets used more evenly to RHB and LHB. Overall the package doesn’t jump off the page, but it is solid enough to provide a string of fantasy relevant starts to end the season. Look for Borucki to finish this year strong and provide benefits beyond his lowkey prospect status. 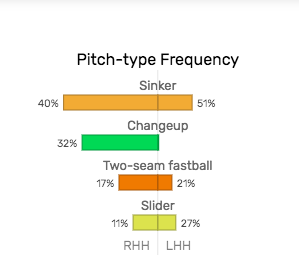 I have been waiting for Leclerc to get save opportunities since his debut in 2016. He possesses all the qualities of a nasty 9th inning option, and it finally looks like his time is nigh with the departure of Keone Kela to the Pittsburgh Pirates. Leclerc uses a devastating slider to generate nearly 55% whiffs. His fastball is also improving over the course of his big-league sample. Overall the profile provides a considerable strikeout ceiling to go with the potential for saves to close out the fantasy year. Kela accumulated 28 saves during his time as the Rangers closer, so Leclerc should be in line for a decent share.

It is the perfect week to pay-up for some closers. Now that the trade deadline is over, most of the situations are finally out of limbo. Smith did not have anyone traded to take over this job; he is just really good. While people are losing closers like Keone Kela, Brad Hand, Zach Britton, and others, it is also important to look at guys like Smith in dynasty leagues. Contending teams are always looking to trade for saves before the fantasy deadline, and if you’re near the bottom of your standings, it is smart to throw extra FAAB on flippable pieces. This lefty provides a solid investment for many different situations.

Victor Robles, OF, Washington Nationals (Top 5 Prospect, yet injury turned people away this season. He’s back!)

There has NEVER been a home run of 113+ mph with a 40+ degree launch angle measured by @statcast. Until @Mets No. 2 prospect Peter Alonso did this in today’s #FuturesGame: https://t.co/TnRERMFTjb pic.twitter.com/QHwdW49QFI