Recently, I’ve been struggling with middle infielder availability on my own team.  I was left between, Odubel Herrera off waivers or Brad Miller, so what did I decide to do?  Trade Matt Harvey for Troy Tulowitzki  – that’s right, I’m about as high on either of these guys as John Stewart is on – well, height.  For this post, I’m going to get into why exactly Herrera doesn’t do it for me; we’ll get to Miller another day.

If you’ve read either of my previous columns, you’ll know that I’m not your typical fantasy writer – if you want to base your roster decisions on statistical indicators, this isn’t the place for you.  I like to roll up my sleeves and dig into how guys play; if you’re also enamored with the art of the game, welcome home friend.  As a reminder, when analyzing hitting approaches, I break the swing into three universal components: stance, trigger, and swing path.  I provided a detailed explanation of each component at the bottom of the article in case you aren’t familiar.

In evaluating Odubel, I found this video of him smacking a dinger off Melancon.  It took me a while to think of a comp, and I had to go back into annals my Mets fandom of yesteryear to figure it out, but the big leaguer he reminds me most closely of is Carlos Baerga.  Now for those of you who don’t recall much about Baerga, he was a critical component of the mid-late 90’s Indians teams that put up some of the best offensive seasons in the history of baseball.  Like the multitude of trades/free agent acquisitions the Mets have made, they welcomed this formerly decent hitter to the neighborhood where good hitters go to die; Flushing, Queens, and his career plummeted soon after arrival.  He put up some amazing numbers in his prime though, so let’s take a closer look and see if Herrera, in fact, carries over some of the virtues of Baerga’s approach beyond just a first glance similarity.

Stance: As you can see from the comparison below, Herrera really takes Baerga’s stance to the next level.  While they have their hands similarly positioned high up by their ears, Herrera then takes Baerga’s open stance and greatly exaggerates it by both opening it more and widening the distance between his feet so much that he can’t even square his right foot to the ground and giving his front knee a hyper-extended look. 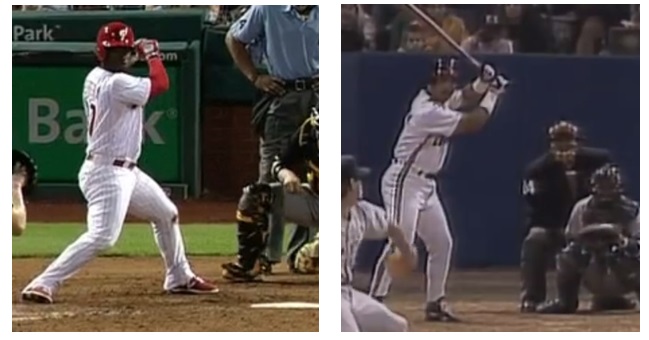 Meanwhile, adding further extremes to his stance, despite his lower body positioning making it more difficult for him to do so, his hips and upper torso are rotated significantly more than Baerga’s, making Baerga suddenly look conservative from what I remembered back from seeing him initially as a more novel hitter.  Presumably Herrera finds this position comfortable, perhaps it’s kind of like when we try to convince ourselves it’s more comfortable to sprawl out over the entire king-sized mattress to justify all the convincing and agony that went into getting it into the bedroom in the first place – maybe Herrera just sees the Major League batters box as that mattress he worked so hard to get.  Regardless, as I’ll get to below, this is problematic in that it requires a heck of a lot of movement to get from here to the trigger – and as we know, more movement pre-swing = more risk of losing balance and having an inconsistent approach with inconsistent results.

Trigger: Now with Herrera, since so much movement will be required to get him from his extreme stance to his trigger, I want to see what the mid-point, or the peak of his leg kick looks like also compared to Baerga: 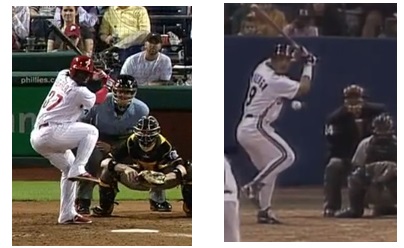 Once again we see Herrera with significantly more movement.  Notice that his front knee actually reaches a height slightly above his waist while his torso rotates back even further. Also notice how tense his arms look as they are flexed further out – it appears as though he’s strangling the bat, readying him to swing with all his might, while Baerga looks much more relaxed with his hands.  While getting jacked up and gripping hard hard may help you in the weight room, this does not help at all in swinging a bat as tension delays fast twitch firings and actually slows down a swing.  Basically, all indications thus far show that he’s trying to do way too much power-wise at the moment.  Let’s take a look now at the final trigger position:

Now his trigger position actually looks fairly healthy.   In terms of bat position, you’ll notice a sharp radial deviation (which I explained in more detail here), but he keeps the bat over his head instead of behind it, avoiding the problem of bat wrap.  You can see that his approach differs from Baerga’s in that Baerga lands closer to the plate, but he also stood further from the plate so that makes sense.  If you’re paying careful attention, you’ll notice that Herrera’s back elbow is up about as high as he can possibly get it, whereas Baerga’s again appears more relaxed.  While little league coaches may still advise youngers to keep the back elbow up, likely to keep them from dropping their back shoulders, you don’t major leaguers with such emphasized back elbows because eventually they must come down to the ball, and again, more movement = more risk.  Also, you’ll notice that Herrera maintains greater upper torso rotation still, which can be okay in and of itself, (as discussed in the Preston Tucker Fantasy) however, combined with all of his other movement, his approach already is screaming to the pitcher without having even started the swing path: “I’m coming at you all or nothing!!!” Speaking of swing path, let’s take a look: 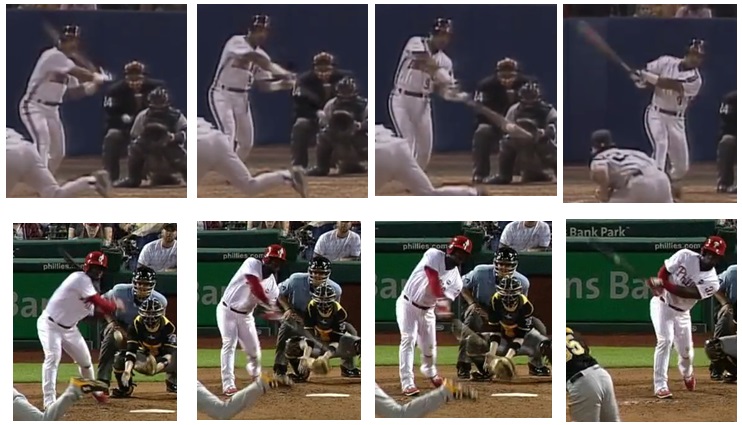 The first thought that comes to mind when I see Herrera’s swing path is ugggg.  Now we have to keep in mind that Herrera is adjusting to a breaking pitch, so one can imagine him getting out in front of the ball, but look at his weight transfer, he’s already put all of his weight on the front foot and his bat head hasn’t even started its decent to the ball.  This early weight transfer does two negative things – first it expels the potential energy from his weight shift leaving him to swing basically only with his arms.  Secondly, transferring weight early makes it hard to control the other parts of the swing.  To draw an analogy that will be hard for Grey to understand, imagine taking a jump shot in basketball but having to jump sharply toward the hoop instead of straight up in the air – it makes your release point a lot harder to control and just like you’ll make a lower percentage of such shots, you’ll hit a lower percentage of pitches.  This is one of the key things I look for in big league prospects – do they have the patience to keep their weight back on breaking pitches – if so, they’re worth further investigation, if not, they likely aren’t ready for the show.  Meanwhile, steady Baergy has his weight balanced as he commences his path to the ball and through contact.  Further, Herrera’s lack of balance in terms of weight shift also translates into a lack of balance in his torso has he must compensate for his weight going forward by dropping his back shoulder to get to the ball – the opposite of what that high elbow is supposed to prevent.   At the end of the swing you’ll see Herrera still stooped over with the weight out front, whereas Baerga maintained balance and finishes ready to bounce out of the box.  One thing that we can credit to Herrera here is that despite all of these flaws, he managed to hit this ball out of the park, but I would attribute this one and only home run of his Major League career to pretty good hand positioning, and little else as this would’ve been a fly out in most parks.

Conclusion:  If you didn’t know any better, Herrera’s crazy stance, big leg kick and jumpy weight transfer would have you thinking he’s an all or nothing power hitter at first glance instead of the average monster the Phillies may have thought they got from his AA stint with the Rangers last year. While Herrera seems to possess solid potential as an outstanding athlete and has some good power fundamentals in terms of hand positioning, until he can tone down his wild, unbalanced approach, I’d stay away from him in just about any league.  I’m not saying that Herrera can’t succeed as a power hitter, but so much pre-swing movement and tension makes it harder for him to make contact as his 25.5% K rate exemplifies.  Unfortunately, his big appetite for power, reduces his chances of being able to utilize his excellent speed to beat out balls in play or turn singles into doubles and worse yet for fantasy limits him from getting stolen bases.  I think he’s in over his head at the Major League level and expect that the Phils will send him down within the next few months for some more seasoning.  Unless he changes, he’ll continue to progress more like the erratic Jordany Valdespin, than the great Carlos Baerga.